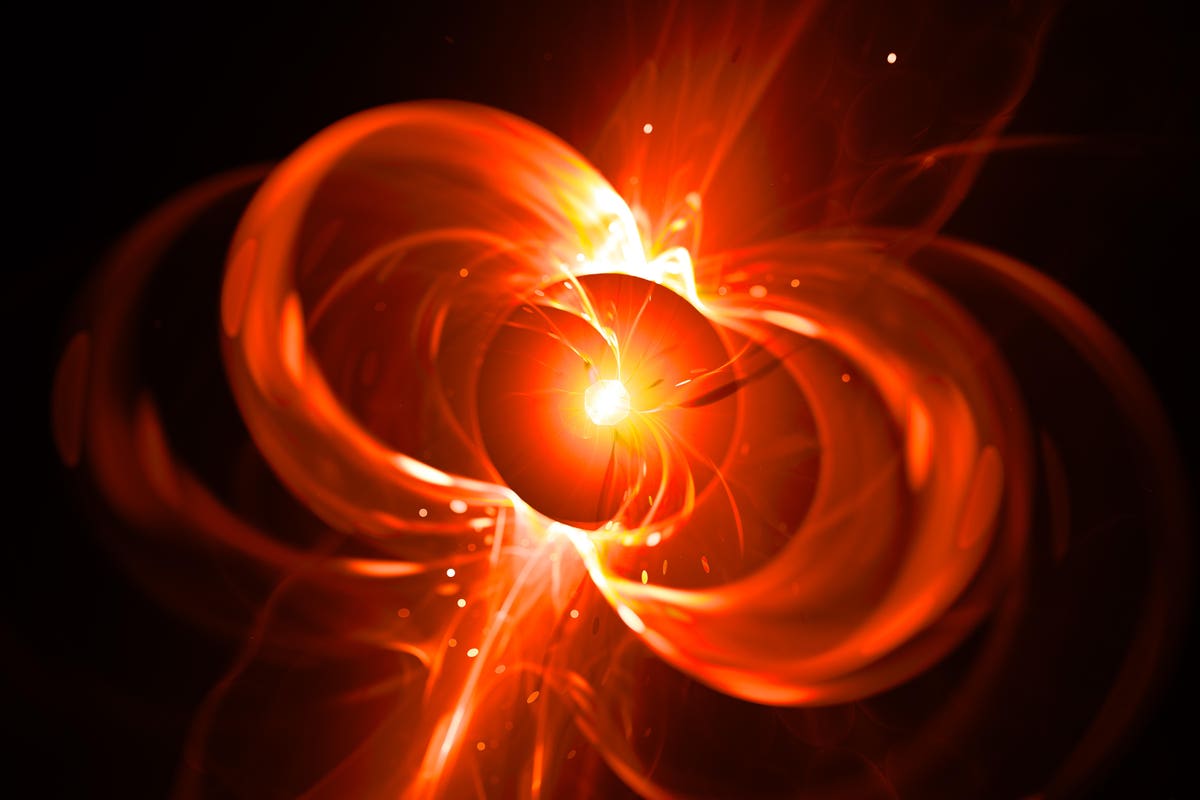 Neutron stars are the smallest known variety of stars, containing the densest form of matter known to man. And, according to a recent paper published in Physical Review Letters, they may also be an ideal laboratory in which to discover dark matter.

Neutron stars are formed when stars between one and three times the sun run out of fuel and collapse in under the force of gravity. This gravitational attraction pushes the electrons of atoms into the protons, turning them into neutrons. The result is an object about ten to fifteen miles in diameter, essentially a huge atomic nucleus with the diameter of a mid-sized city, consisting essentially entirely of neutrons.

Dark matter is thought to be a form of matter that both experiences and causes gravity but does not emit any form of electromagnetic radiation – light, heat, radio waves, nothing. There is substantial astronomical evidence that dark matter exists, but it has never been directly observed and thus scientists don’t have any idea of its detailed properties. Current thinking is that it is a stable and electrically neutral subatomic particle, but the mass of individual dark matter particles is not known.

A group of scientists have studied a group of seven neutron stars which are emitting an unexplained amount of high energy x-rays and have come up with a possible explanation for the observation. If dark matter exists and is in the form of a theoretical subatomic particle called axions, then a specific class of neutron stars would be an ideal laboratory in which to find it.

Axions are a particle proposed to solve an unexplained behavior of the strong force, which is responsible for holding protons and neutrons together in the center of atoms. In principle, the force could favor matter over antimatter or vice versa, but it doesn’t. There needs to be a reason that this possible behavior doesn’t occur and the axion particle was proposed to solve this mystery. If the axion exists, the strong nuclear force should treat matter and antimatter equally. Note that the axion is a theoretical particle that hasn’t been discovered.

But, if the axion >>does<< exist, it could also be dark matter. So how do dark matter axions and neutron stars connect?

A nearby group of seven neutron stars is called the Magnificent Seven. Like all neutron stars, they generate powerful magnetic fields. However, unlike many neutron stars, they are extraordinarily quiescent. They emit soft (e.g. low energy) x-rays and ultraviolet light. In essence, they are quiet and dull, which is very important for axion searches, as it makes it easier to look for small unexpected excesses of other forms of light.

Neutron stars are made almost exclusively of neutrons. These neutrons move around inside the star, bumping into one another. When they interact, they emit neutrinos. Neutrinos are well-known, low mass particles that then escape the neutron star. They are emitted in nuclear reactions, like inside nuclear power plants or the sun.

In a recent paper, astronomers studied the Magnificent Seven and found that all emitted the expected amount of soft x-rays and ultraviolet light, however, two of the seven also emitted a significant amount of unexplained amount of hard x-rays.

In a second paper, a group of researchers (some of whom were authors of both papers) proposed that the excess of hard x-rays could be explained by axion emission.

It is important to be cautious. The authors did not claim that they have observed axions, merely that the axion hypothesis could explain the unexplained hard x-rays.

’s also worth noting that the unexplained hard x-rays were definitively observed in only two of the seven neutron stars.  Two of the remaining five appeared to possibly also be emitting hard x-rays, although the data was inconclusive. Two others had spectra that could possibly indicate the emission of hard x-rays, but the signal was weak and could easily be spurious. The remaining star actually had a slight deficit of hard x-ray emission. If the axion explanation is correct, scientists will need to understand why the different stars had different amounts of hard x-ray emission.

It is probably more probable that the hard x-rays originating from of the Magnificent Seven can be explained by a more ordinary (although still explained) astronomical phenomenon. To be sure that the axion explanation is correct, researches will have to generate and detect axions in a laboratory here on Earth. There are many ongoing experiments, ranging from ones searching for axions from space, to others trying to generate them in particle beams.

Researches will continue to search for other possible signatures of cosmic axions.

Dog Sneaks Into Couple’s Home and Snuggles Her Way…

Mahesh Babu pens touching letter for his fans as gratitude…