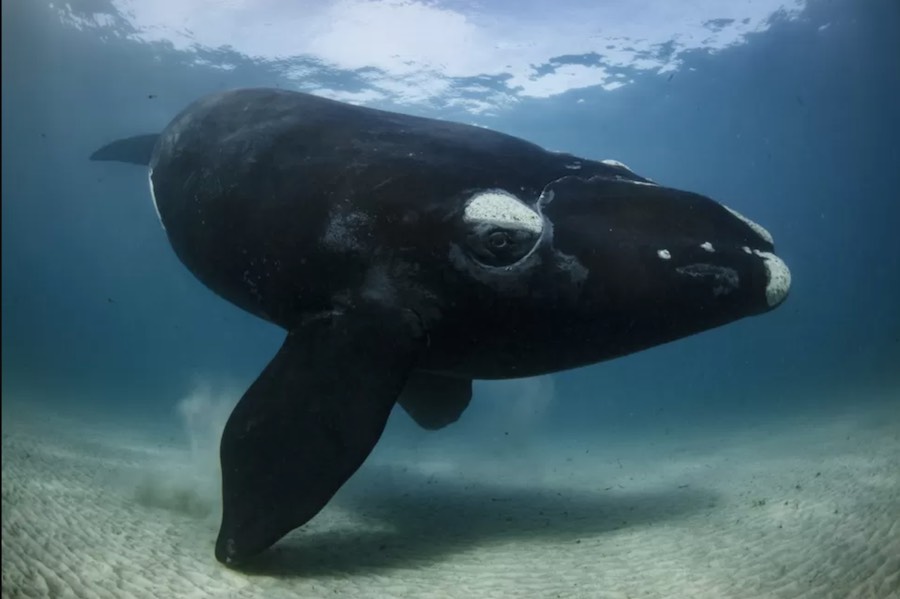 “I was so surprised to see how he carried the mongoose with such care. I immediately started to follow him and document it,” he told BBC News.

The motives of the ape are questionable, as they do hunt animals, but with his free hand gently wrapping under the arm holding the mongoose, signs of aggression were few.

The BBC also heard from Dr. Barbara Fruth, director of an organization that has observed bonobos for 20 years, and who said that “we know from captivity bonobos care for individuals other than their own species.”

The populations of this once-Endangered southern right whale are now returning to vast numbers, and this particular juvenile had a particular interest in the camera and person of Richard Robinson.

In the category of “animal portraits” this photograph was selected as a finalist.

Not to be outdone, this coconut octopus decided to strut his colors and coils from inside a “borrowed” clam shell for Samuel Sloss.

While muck diving in Sulawesi, Indonesia, Sloss noticed the home invader, who promptly closed the shell during Sloss’ attempts at picture taking. Eventually though, he opened up and gave Sloss a finalist spot in the 15-17-year-old category.

Like Ziegler, Photographer Brandon Guell had to spent days wading through chest deep water to photograph an early dawn phenomenon that only happens a few times a year in very few places.

These green tree frogs are about to have a breeding frenzy on these stalks of grass in Costa Rica. Each female lays 200 eggs, which eventually fall into the water below and become tadpoles.

Abandoned since 1992, Kolyuchin Island in Russia has been claimed by polar bears who, as a result of shrinking sea ice, are forced into scavenging the remains of industrial civilization.

A low-noise drone was used to capture this excellent portrait of a bear that had taken a break on a windowsill.

Tiina Törmänen got the cooperation for a photo from this lively group of European perch swimming through clouds of algae in a lake in Posio, Lapland.

The algae is actually the result of warmer weather allowing these microscopic plants to bloom in great, problematic numbers, as these perch bear witness.

OpenAI’s image generator DALL-E is now open to the…

It’s Time To Steal From The Empire