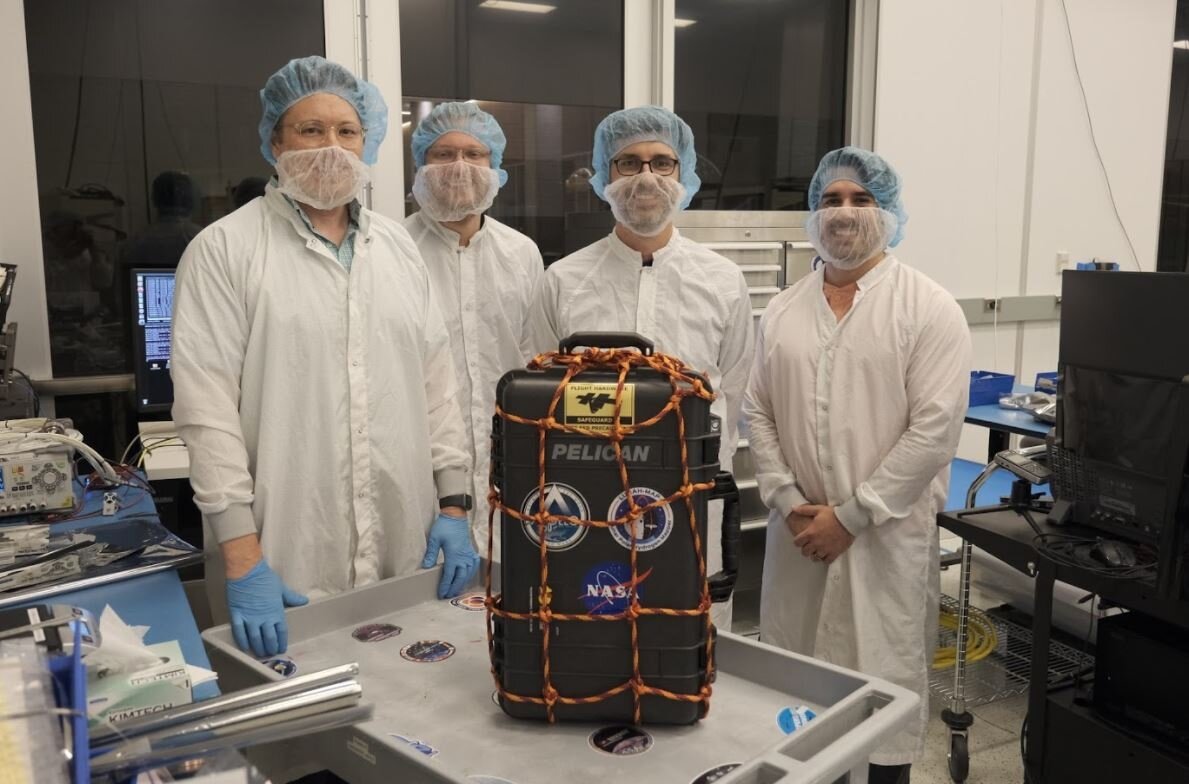 Drive to charge packagers for recycling, but industry fights

The ASU-led team that built NASA’s Lunar Polar Hydrogen Mapper, or “LunaH-Map” for short, has safely delivered their spacecraft to NASA’s Kennedy Space Center in Florida in preparation for a launch expected later this year on NASA’s Space Launch System (SLS) Artemis I rocket.

LunaH-Map is a fully functional interplanetary spacecraft about the size of a large cereal box and weighing about 30 pounds. It is the first mission to be led, designed, assembled, integrated, tested and delivered from the ASU Tempe campus. Its destination is in orbit around the moon, from which it will map water-ice in permanently shadowed regions of the lunar south pole.

To start its journey from ASU to NASA’s Kennedy Space Center, first the spacecraft was placed in a doubly sealed, nitrogen-filled, electrostatic-safe bag. It was then carefully placed into a crushproof and dustproof foam-lined case.

Four tickets from Phoenix to Orlando were purchased on a commercial airline, three for the human members of the LunaH-Map team and one for the spacecraft, which was placed in the middle seat between two team members.

Once the LunaH-Map team arrived at Kennedy Space Center, they unpacked the spacecraft, checked to make sure it had not been jostled or collected any dust or debris during transport, and took photos for documentation. After installing a set of handles and carefully removing the “Remove Before Flight” cover plates, they slid the spacecraft into the flight dispenser that will launch with the SLS rocket. Then, the door to the flight dispenser was carefully closed and latched.

“From there, we handed the operation over to NASA,” said LunaH-Map Principal Investigator and Assistant Professor Craig Hardgrove of ASU’s School of Earth and Space Exploration who, along with AZ Space Technologies Mechanical Lead Nathaniel Struebel and Qwaltec Operations Lead Patrick Hailey, transported the spacecraft to its destination in Florida.

When Artemis I launches later this year, including LunaH-Map, there will be around a dozen small spacecraft, called CubeSats, onboard. These will be the secondary payloads on the Artemis I mission.

The primary mission of Artemis I is testing NASA’s Space Launch System, which is designed to lift more than any existing launch vehicle. The rocket will also transport the Orion spacecraft, which will perform a lunar flyby and return to Earth and which, on future missions, will carry human crews to space. The ring that connects Orion to SLS has room for the CubeSat payloads, which will be sent into deep space during the mission.

Once Artemis I is launched and LunaH-Map is deployed, the spacecraft will use a series of lunar fly-bys and its ion propulsion system to enter the lunar orbit. Once it reaches low altitude, it will begin its scientific mission to measure the abundance of hydrogen within permanently shadowed regions of the lunar south pole, using a new type of compact neutron spectrometer.

While we know from decades of lunar exploration that there are water ice enrichments in certain regions around the poles of our moon, LunaH-Map will seek to determine how much and where these enrichments are. They may contain enough water to change our view of the formation and evolution of moon, or they may contain enough water to support future human and robotic exploration of the solar system.

The total mission will last about a year and the spacecraft will perform nearly 300 orbits of the moon. During this time, LunaH-Map will be operated from the mission operations center in Interdisciplinary Science and Technology Building 4 on the ASU Tempe campus where the spacecraft was built. The team will communicate directly with NASA’s Jet Propulsion Laboratory Deep Space Network to send commands that will be transmitted to the spacecraft.

“Delivery of the spacecraft to NASA and the Artemis program represents an enormous achievement that is the culmination of years of dedicated work by the ASU LunaH-Map team and our many vendor and contractor partners nationwide,” said LunaH-Map Deputy Principal Investigator Jim Bell, who is a planetary scientist and professor at ASU’s School of Earth and Space Exploration. “It’s a milestone achievement for ASU overall and will help pave the way for many similarly exciting future CubeSat missions for ASU students, faculty and staff.”

With Hardgrove and Bell, the LunaH-Map team includes many ASU staff and students, representatives from two local Tempe engineering firms—AZ Space Technologies and Qwaltec—and representatives from other U.S. commercial space companies and NASA centers. The spacecraft includes a top plate with signatures of those who worked on LunaH-Map and the names of friends and family.

Now that the spacecraft has been delivered, the team will use the spacecraft engineering model, located at ASU, to develop and test the spacecraft activities that will be needed once LunaH-Map is in flight. This model includes all the components on the flight spacecraft just delivered to NASA’s Kennedy Space Center.

“LunaH-Map, and all the other Artemis I CubeSats, are paving the way for a new type of space exploration mission that leverages the strengths of pairing a professional engineering staff with university staff and students,” Hardgrove said. “These missions are some of the first to test new technologies required for very small spacecraft to complete science missions in deep space.”

Following the success of these missions, Hardgrove sees a future for CubeSats to be increasingly involved in high-risk, high-reward science missions, paired with larger NASA spacecraft. In this capacity, they can be sent out to unexplored regions of the solar system, perform independent maneuvers and collect science data too risky for the primary mission to acquire.