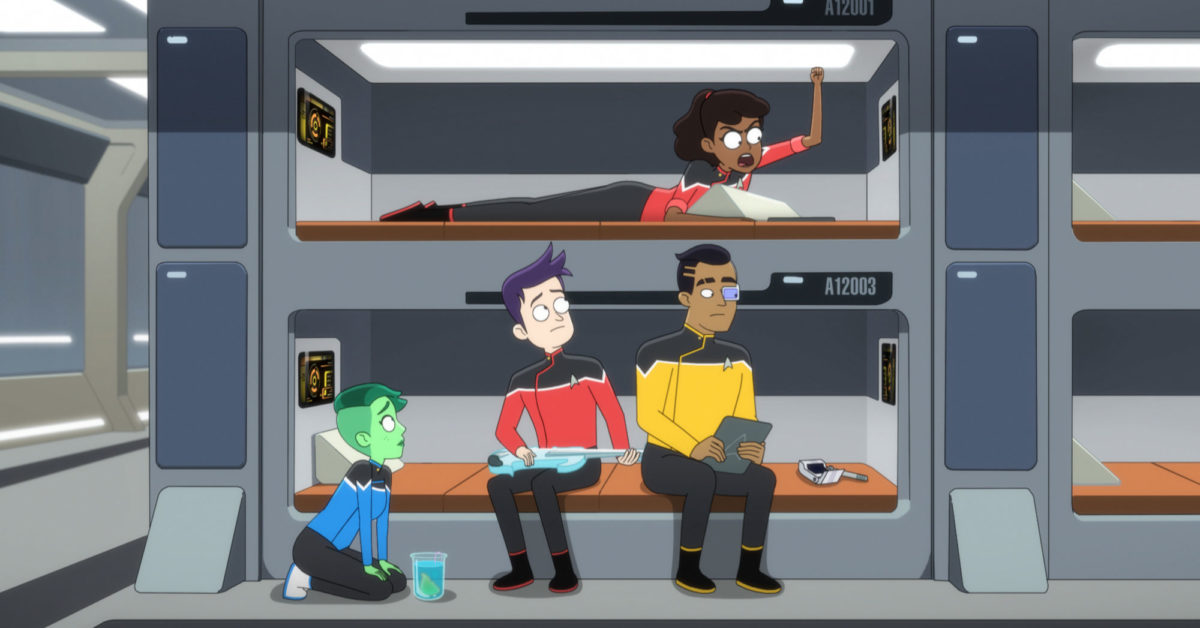 Following up on Mike McMahan and Paramount+’s Star Trek: Lower Decks stars Tawny Newsome and Noël Wells joining host Paul F. Tompkins to share a preview clip of what’s to come during the third season, we have some preview images for this week’s chapter for you to check out. But with S03E04 “Room for Growth” only sporting three images, we’re wondering if the episode is going to have a lot more going on during it than the folks behind the series want viewers to know. And with Wil Wheaton‘s The Ready Room apparently on hiatus until November, that means we’re without another preview option. So for now, we’ll leave the following images with you to interpret:

And here’s a look back at the sneak preview from an upcoming episode that Newsome & Wells shared during “Star Trek Day”:

For a look back at everything that’s led up to this week’s third season premiere and some teases for what’s to come, check out the following Star Trek: Lower Decks featurette:

Quaid shared some details on what fans can expect from the upcoming Lower Decks/Strange New Worlds crossover with EW, including that Quaid’s Boimler & Tawny Newsome‘s Mariner will be appearing in physical form, and Jonathan Frakes is directing the episode. In addition, Quaid opens up about his bromance with Ethan Peck (Spock) and what it was like donning a Starfleet uniform. In addition, Quaid dropped a teaser about the third season of Lower Decks that includes some Deep Space Nine talk.

Quaid & Ethan Peck: “Spoimler”? “It was great. That cast was awesome. Ethan Peck and I have a bromance for the ages. We call it Spoimler: Spock and Boimler. It’s amazing, but that whole cast is so friendly and welcoming and cool. We just had a ball, and we got to be directed by Jonathan Frakes. So what could be better?”

Quaid on Getting to Wear a Starfleet Uniform: “[Boimler] holds such a special place in my heart. He’s one of my favorite characters I’ve ever played, but to be able to fully inhabit him, put on the uniform, make my hair purple, all that stuff, that was such a good time.” But as much of an honor as it was? The uniforms have a high “sweaty” factor. “I figured it would be sweaty ’cause I tend to sweat a lot, but my God, that thing is not breathable. It looked really good, but there were those first few fittings where I had the purple hair, I had the uniform on, it just blew my mind. The coolest part was I was able to study the show and look at how the artist animated Boimler and how he moved, and I was able to put a little bit of that in there,” Quaid added.

“Deep Space Nine” Factors Into “Lower Decks” in Many Ways: “We actually get to see the station, we get to walk the promenade, and you get to see some familiar faces. I’m just so excited that fans get to see that, cause we started the tease in one of the early seasons where a ship was docked at ‘Deep Space Nine.’ It was in a flashback, and fans freaked out about that, but I think it’s gonna make a lot of ‘Deep Space Nine’ fans very, very happy.”

Developed by Emmy Award-winner Mike McMahan (“Rick and Morty,” “Solar Opposites”), STAR TREK: LOWER DECKS, an original animated comedy series, focuses on the support crew serving on one of Starfleet’s least important ships, the U.S.S. Cerritos, in 2380. Ensigns Mariner, Boimler, Rutherford and Tendi have to keep up with their duties and their social lives, often while the ship is being rocked by a multitude of sci-fi anomalies. Season two will follow the adventures of our favorite Starfleet support crew in the U.S.S. Cerritos as they deal with changes in group dynamics, chasing promotions, and tons of sci-fi missions.

How to Successfully Scale Your Team