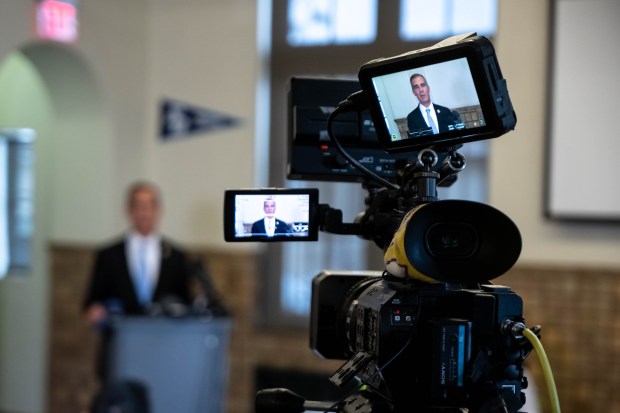 The number of people experiencing homelessness in the city of Los Angeles has grown slightly compared to the prior homeless count conducted about two years ago in 2020, to an estimated 41,980 homeless, according to a count completed in February 2022 by the Los Angeles Homeless Services Authority (LAHSA).

That number compares to the estimated 41,290 people who were homeless when the last count was conducted, a difference of just under 700 people, or an increase this year of 1.7%.

Los Angeles’s homeless population makes up the majority — more than 60% — of the 61,944 people countywide who were estimated to be homeless on a given night, based on the count conducted by LAHSA.

While the results appeared to show little change in the overall numbers for the city of Los Angeles, some city leaders said it was an improvement over past years, when there were often double-digit increases.

Some also said the data officially released on Thursday, Sept. 8, indicate that efforts to bring people indoors from tents, makeshift shelters and vehicles — to stay in shelters — have made a difference.

One key figure highlighted by LAHSA officials, as well as by some Los Angeles City Council members, was the rise in the number of people who are homeless, but are sheltered. That number went up 8.7% in the city of Los Angeles and was bigger countywide, at 12%.

The figures offer “clarity that what we’re doing is working, that if we can increase the number of shelter beds, and make housing options available to people in the district, that we can continue to bring unsheltered homelessness down,” said City Councilmember Nithya Raman, who sits on the City Council’s Homelessness and Poverty Committee.

The decrease in people who are unsheltered was more marginal: while there were 1,000 more people sheltered citywide than during the count two years ago, there was a drop of only about 400 people living unsheltered in tents, makeshift shelters and vehicles.

Even as homelessness numbers go up or stay flat overall, the increase in people now being sheltered leaves open the question of how many will eventually be housed — an issue city officials grapple with due to the high cost of housing and lack of financial assistance for those who cannot afford housing.

Raman acknowledged that Los Angeles, when compared to New York, has such high unsheltered homelessness, that sheltering people has ended up being the “first step in a long journey.”

Past underinvestment, not only in housing, but also shelter, means that Los Angeles has had to first tackle just getting people indoors, and into shelters, she argued.

In New York, where there is very little unsheltered homelessness, people live in shelters for a long time, and “that’s a problem too,” she said, “but in Los Angeles, we’re not even there yet.”

But for Raman — who before joining the City Council founded a homeless outreach organization in her Silver Lake community and helped author a key city report on how city resources and funds were being used to address homelessness — said the results of this year’s count of sheltered people are a promising sign.

“I do think we need to acknowledge positive progress and build on the foundation that we’ve already built,” she said.

These figures come during a flurry of efforts to shelter people — if only temporarily — through construction of new shelters. They include tiny homes (most resemble tool sheds), as well as converting motels and hotels to shelters, part of a program called Project Roomkey that taps federal pandemic emergency funding. That hotel program, however, is ending soon.

Raman said the Project Roomkey program was a significant moment in which there was heavy investment in shelters, letting people stay in their own rooms. Typical shelters have been in congregate settings, usually with beds or cubicles in a single, large room.

One of the busiest council members in terms of building shelters in recent years has been City Councilman Paul Krekorian, who represents a district in the southeast San Fernando Valley. His district saw a 21% drop in homelessness overall. His district also saw a 34% decrease in unsheltered homelessness.

He attributed the drop in unsheltered homelessness in his district to efforts to build tiny home villages and creating a navigation center — where people could store their belongings and access services, including job search programs — and a new congregate shelter.

On Thursday, he touted his role in helping craft the city’s anti-camping law, known as L.A.M.C. 41.18, and efforts to clear encampments. Critics of that law, who include public health officials and UCLA researchers, say the law could lead to forced, and violent, displacement of people who have nowhere else to go.

But Krekorian has said that the law was created to strike a balance between clearing public areas such as sidewalks of encampments, and the creation of shelter and housing.

When asked if that was a struggle, given the continued lack of services and housing, Krekorian emphasized that the city has already done its best to make large investments to address homelessness, and it’s time for other levels of government to pitch in.

He said  state and federal officials should be able to see now, more clearly, that the city is “more than doing our part.”

“There’s not a member of this council that doesn’t spend their time and their staff’s time, you know, on this issue every single day, you know – there’s none,” Krekorian said.

“State and federal agencies need to step up and help us,” he said. “We have one of the least affordable housing markets in the entire nation in Los Angeles. And yet … we just can’t seem to get the federal government’s attention to provide much more in the way of Section 8 vouchers and other housing support.”

The city has little jurisdiction over the availability of mental health and substance abuse services, Krekorian added, so “we’re counting on the state and the county to deliver those services.”

Krekorian said that he hopes “the homeless count will provide us with an opportunity to have that deeper conversation about how, as a society, we’re going to come together to rise to this moment.”

Meanwhile, the steepest overall drop in homelessness in Los Angeles occurred in a district that has generated heated debate over the issue.

Councilman Mike Bonin, whose 11th District includes Venice, saw overall homelessness drop 38.5%, which he attributed to more investment in shelters and housing. But unlike Krekorian, he has been one of few city council opponents of the city’s anti-camping ordinance.

He said that even though other districts where the law was enforced also saw big drops, he saw the biggest decrease without having to enforce the 41.18 law in his district.

Laws like 41.18, which uses enforcement to deal with encampments, are often viewed with suspicion by homeless advocates who argue that it allows City Council districts to potentially shift or push people from one district to the next, skewing the homeless numbers. Just before the 2020 homeless count, the organization Ktown for All, which was formed to counter protesters in Koreatown who objected to a shelter in the community, asked city leaders to refrain from conducting enforcement operations at  encampments.

“In the interest of maintaining the accuracy and integrity of the Greater Los Angeles Homeless Count, we demand a moratorium on enforcement actions aimed at clearing camps or confiscating property,” the group wrote, in an open letter directed at city council members, the mayor and LAHSA officials.

A similar effort also occurred prior to the count earlier this year.

Don’t Disrupt the Homeless Count: We Demand A Moratorium on Sweeps: An open letter to @MayorOfLA and LA City Council to cancel sweeps leading up to the #HomelessCount.

Bonin has had little patience for the idea of “balance” that some of his colleagues cite. He said this week that it is a “tone deaf point …  because it’s not like we have an excessive amount of housing and shelter. It’s not like there is a place for everybody to go and people are refusing to go into it.”

Raman noted this week that the homeless count results arrived at a time when there are “some really active discussions going on in Los Angeles,” about the best way to respond to homelessness.

Many city leaders have grappled with whether or not they can create a balance between sheltering and housing people experiencing homelessness, and answering calls to have streets quickly cleared of encampments, usually through enforcement.

Raman said, “When you don’t have housing or resources to offer people, the best that you can hope for is that people move from their current location, further down the street or across the street.”

She added that unless “we’re able to offer housing to people who are experiencing homelessness there’s not really a sustainable way forward in that conversation … And I think Angelenos recognize, at least in my experience, that that process is futile.”

More detailed data about the 2022 homeless count results can be found here, on the Los Angeles Homeless Services Authority website.