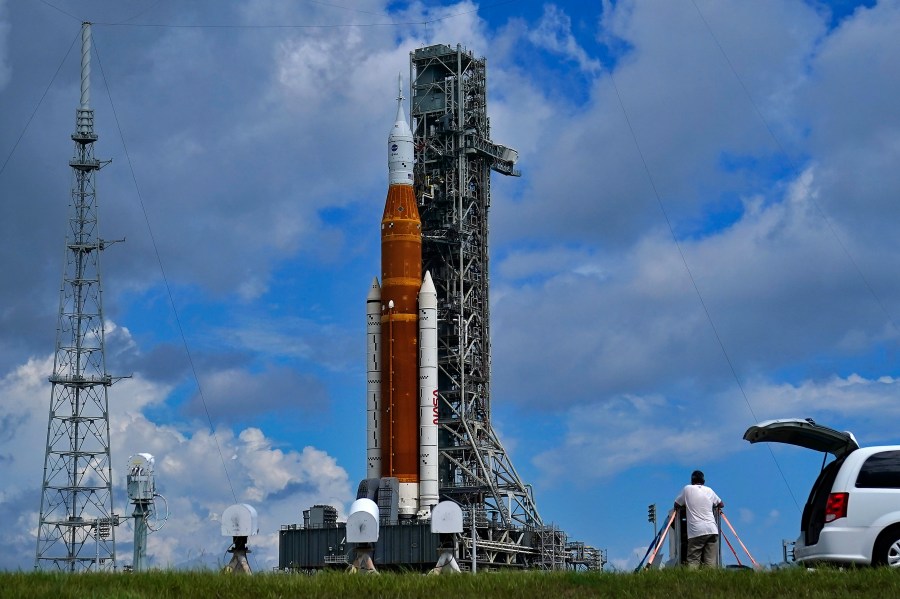 TITUSVILLE, Fla. (WFLA) — NASA’s first attempt to launch Artemis I, the first mission in the program that will send humans back to the moon, was scrubbed Monday morning after several hours of technical difficulties.

Artemis I had been scheduled to lift off from Kennedy Space Center in Florida during a two-hour launch window that opened at 8:33 a.m. ET. But NASA went into into an unplanned hold at T-40 minutes and eventually scrubbed the mission entirely after teams spent most of the morning troubleshooting different issues leading up to launch.

The first hiccup happened just after 1 a.m. ET when the launch team had to press pause on loading propellant into the rocket due to weather. Propellant loading eventually got underway, but just before 4 a.m., NASA engineers had to troubleshoot another issue with a liquid hydrogen leak.

An engine conditioning issue was the problem that eventually halted the countdown. According to NASA, engineers had to “evaluate why the bleed test to condition the engines was not successful.”

“Engineers are looking at options to gather as much data as possible. The Artemis I rocket and spacecraft are in a stable, safe condition,” NASA added.

Now that Monday’s launch has been scrubbed, NASA will look at its earliest backup opportunity, which is Friday, Sept. 2 at 12:48 p.m. ET. That launch window is also two hours long but the mission would be shortened to 39 days. NASA could also launch Monday, Sept. 5 between 5:12 p.m. ET and 6:32 p.m. ET. A launch in that window would lead to a 42-day mission.

Once Artemis I lifts off, the mission will travel a total of about 1.3 million miles.

Launch Pad 39B, the pad that Artemis I will launch from, is the same pad Apollo 10 launched from. The Apollo program was the last time humans stepped foot on the moon, more than 50 years ago. In Greek mythology, Artemis is the twin sister of Apollo.

Under the Artemis program, NASA plans to land the first woman and the first person of color on the moon. NASA is looking to establish a long-term presence on the lunar surface and use what is learned to eventually send astronauts to Mars.

Artemis I is NASA’s first step when it comes to achieving those goals. It will launch the agency’s Space Launch System (SLS) rocket – also called the mega moon rocket – and send the Orion spacecraft on a test flight around the moon. The SLS rocket and Orion, along with the ground systems at Kennedy Space Center, make up NASA’s deep space exploration system.

Artemis I is an uncrewed mission, meaning there will be no humans on the flight. NASA calls it “the first in a series of increasingly complex missions to build a long-term human presence at the moon for decades to come.”

“The mission will demonstrate the performance of the SLS rocket and test Orion’s capabilities over the course of about six weeks as it travels about 40,000 miles beyond the moon and back to Earth,” NASA explained.

The SLS rocket is described by NASA as the world’s most powerful rocket. According to the agency, it is the only rocket that can currently send the Orion spacecraft to the moon safely.

“SLS is designed specifically for deep space missions with humans and will send the Orion spacecraft to the moon, which is nearly 1,000 times farther than where the International Space Station resides in low-Earth orbit,” NASA said. “The rocket will provide the power to help Orion reach a speed of 22,600 mph, to escape the pull of Earth’s gravity [and] send the spacecraft to the moon.”

Orion, the spacecraft that will launch atop the SLS rocket, was designed to carry humans to deep space, according to NASA. The agency says it was “specifically designed to sustain humans hundreds of thousands of miles from home.”

Artemis I is the first “integrated test” of NASA’s deep space exploration system. On its website, NASA explains that the main goals of the mission are to “demonstrate Orion’s systems in a spaceflight environment” and to “ensure a safe re-entry, descent, splashdown and recovery.”

This will help when it comes to future missions, including Artemis II which will be the program’s first crewed flight around the moon.

WFLA’s Amanda Holly will be at Kennedy Space Center Monday for the scheduled launch and will provide live coverage throughout the morning.

Denial of responsibility! My droll is an automatic aggregator of the all world’s media. In each content, the hyperlink to the primary source is specified. All trademarks belong to their rightful owners, all materials to their authors. If you are the owner of the content and do not want us to publish your materials, please contact us by email – [email protected].com. The content will be deleted within 24 hours.