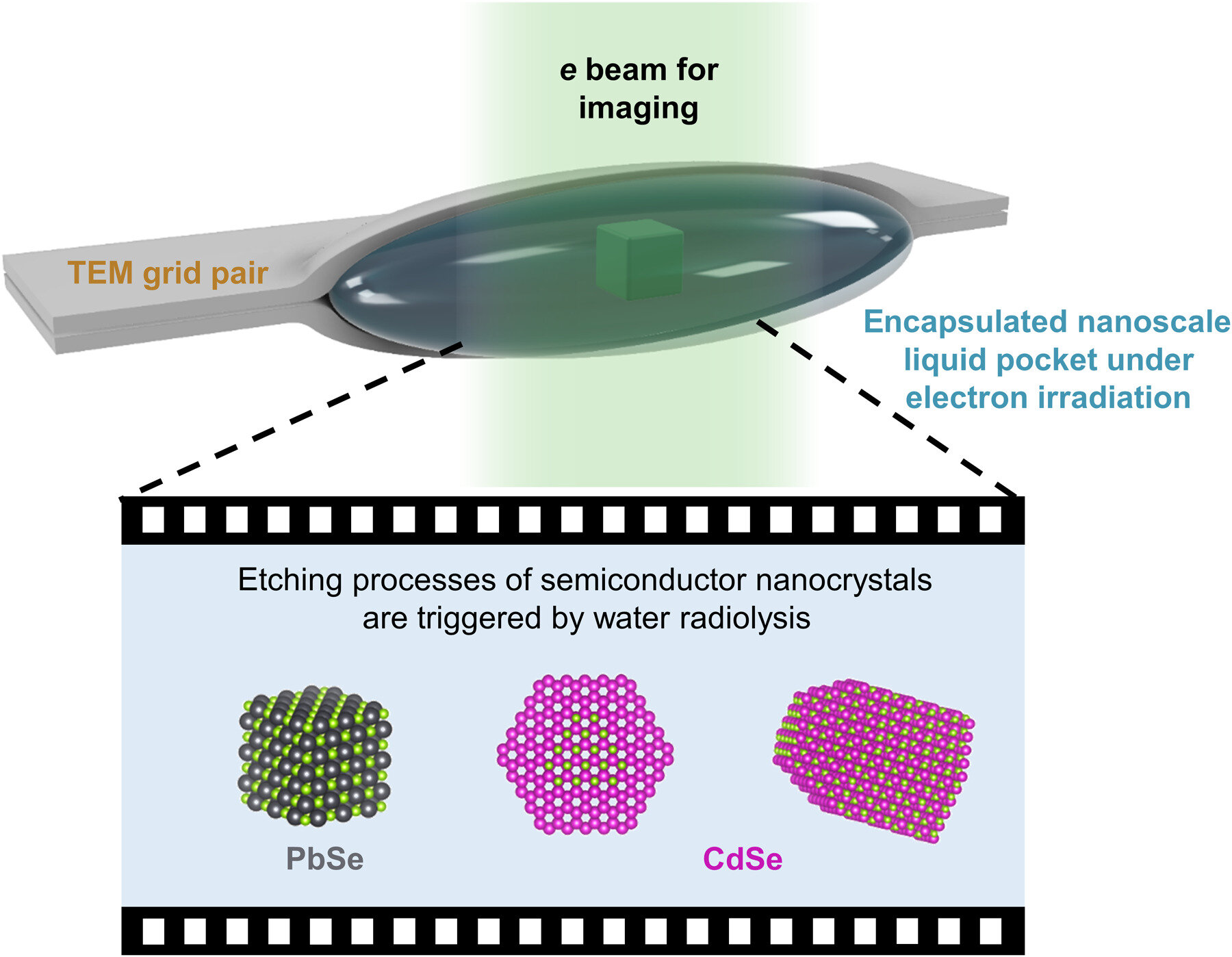 Semiconductor nanocrystals of different sizes and shapes can govern the optical and electrical properties of materials. Liquid cell transmission electron microscopy (LCTEM) is an emerging method to observe nanoscale chemical transformations and inform the precise synthesis of nanostructures with expected structural features. Researchers are investigating the reactions of semiconductor nanocrystals with the method to study the highly reactive environment produced via liquid radiolysis during the process.

In a new report now published in Science Advances, Cheng Yan and a research team in Chemistry and Materials Science at the University of California Berkeley, and the Leibniz Institute of Surface Engineering, Germany, harnessed the radiolysis process to replace the single particle etching trajectory of prototypical semiconductor nanomaterials. Lead selenide nanotubes used during the work represented an isotropic structure to retain the cubic shape for etching through a layer-by-layer mechanism. The anisotropic arrow-shaped cadmium selenide nanorods maintained polar facets with cadmium or selenium atoms. The trajectories of transmission liquid cell electron microscopy revealed how the reactivity of specific facets in liquid environments governed the nanoscale shape transformations of semiconductors.

Semiconductor nanocrystals contain widely tunable optical and electrical properties that depend on their size and shape for a diverse array of applications. Materials scientists have characterized the reactivity of specific bulk crystal facets toward growth and etching reactions to develop the most arbitrary patterns in top-down bulk semiconductor processing. The multiple facets of nanocrystals and their reaction mechanism make them interesting for direct investigation. The thermodynamics of colloidal nanocrystals can influence the organic-inorganic interfaces defining them. Liquid cell transmission electron microscopy offers the required space-time resolution to observe nanoscale dynamics, such as the self-assembly process. The team therefore sandwiched an aqueous pocket containing nanocrystals between the ultrathin carbon layers of two transmission electron microscopy grids, and used tris (hydroxymethyl) aminomethane hydrochloride (tris·HCl), an organic molecule to regulate the etching of sensitive semiconductor nanocrystals.

Existing research on LCTEM and nanocrystals are limited to noble metals due to their inability to regulate the chemical environment during radiolysis, causing reactive materials to degrade. Recent research suggests a possibility to design new environments for LCTEM, to observe single-particle etching trajectories of reactive nanocrystals. During the experiments, the tris·HCl additive regulated the electrochemical potential of the etching process, and the team used kinetic modeling to estimate the concentration and electrochemical potential of the amine radical species in the liquid cell.

As proof of concept, the scientists obtained representative transmission electron microscopy images of a lead selenide nanocube in vacuum and gathered a time-series of images during layer-by-layer etching of lead selenide nanocrystals. The outcome of LCTEM imaging showed the formation of a substance with higher image contrast around the lead selenide nanocrystals as a product of etching reactions, it appears that during the etching process, selenium oxidized and dispersed into the liquid to facilitate the formation of lead chloride, with chloride ions in the lead pocket. When compared to the cubic lattice of lead selenide, wurzite cadmium selenide featured an anisotropic lattice with alternating layers of cadmium and selenium atoms. During the growth of wurzite cadmium selenide nanocrystals, the surfactant ligands favorably bound to the cadmium regions to facilitate the fast growth of selenium regions.

In this way, Cheng Yan and colleagues used liquid cell electron microscopy (LCTEM) to show the possibility of directly examining the facet-dependent reactivity of colloidal nanocrystals at the nanoscale. The method offered real-time, continuous structural trajectories, in contrast to classical methods. Existing research had already highlighted the effect of the inclusion or removal of ligands on the self-assembly and etching of nanocrystals in LCTEM experiments.

The team showed how sensitive nanomaterials such as lead selenide can be studied using LCTEM and highlighted the inclusion of organic additives such as tris·HCl to regulate the radiolytic redox environment in liquid cell electron microscopy. Future studies can enable the potential to gain real-time information about the transformation of an array of functional nanostructures with increasing complexity using core/shell nanocrystals, as well as those assembled via inorganic-organic interfaces.