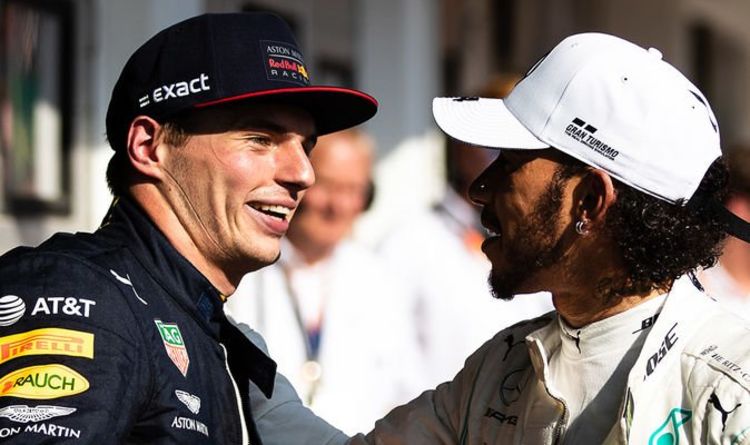 Hamilton was adjudged by race stewards to have been “predominantly to blame” for an incident between the pair at Silverstone last weekend, which resulted in Verstappen being taken to hospital. The seven-time world champion was given a 10-second penalty, which dropped him from second to fourth at his pit stop but he recovered to win the race. Verstappen, 23, posted on social media saying Hamilton’s move had been “dangerous” and his victory celebrations were “disrespectful and unsportsmanlike,” before reportedly unfollowing the Mercedes driver on Instagram.

Their rivalry has been fierce on the track for some time now and it has seen them go wheel-to-wheel at Imola, Portimao and Barcelona, and it “boiled over” on Sunday, according to former F1 driver Jolyon Palmer.

But away from the cameras, Mr Clarkson claims he was privy to a conversation between Hamilton and Verstappen which he described as indicating “total harmony” between the pair.

He said during the F1 Nation podcast in June: “What was interesting after the race (French Grand Prix) was that we think there is friction maybe between the team principals, Christian and Toto, and difficult times for Mercedes at the minute.

“But the relationship between Max Verstappen and Lewis Hamilton is still fantastic.

“After the race, they came into the press conference room really relaxed.

“Before the cameras were turned on, Max sat there chatting to Lewis.”

Mr Clarkson went on to detail how the pair even complimented each other.

“Max changed the subject and asked him about Lewis’ hair. ‘Is it the corn-rows, is that what you call it? How often do you have to get those done’.

Opinion from current and former drivers on the incident has been split.

Two-time champion Fernando Alonso and Leclerc both said it was a ‘racing incident’ in which neither driver was more to blame than the other.

But ex-F1 drivers Mark Webber and David Coulthard both said in their roles as Channel 4 pundits that Hamilton was at fault.

In their ruling, the stewards mentioned Hamilton “did not reach the apex of the corner, with room available to the inside” and “did not avoid contact”.

Pegasus Spyware: NSO Group will no longer talk to media about the ‘abuse’ of Pegasus spyware |

ENG vs IND: Mayank Agarwal Ruled Out Of First Test Against England Due To Concussion