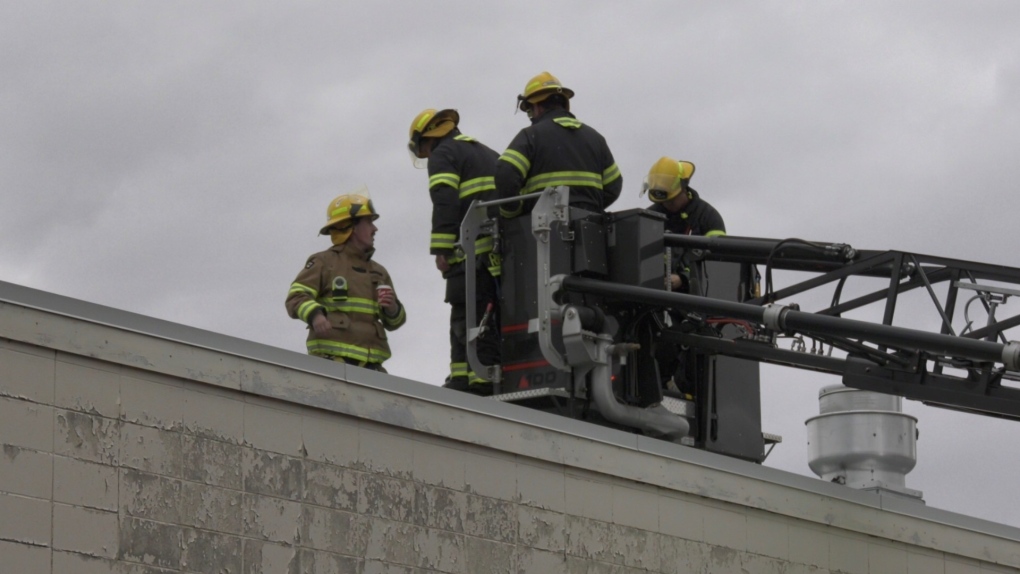 After a four-year hiatus, a team of five firefighters from Lethbridge Fire and Emergency Services were raised by a ladder truck to the roof of The Place Bar and Arcade.

“We’re excited to get up on the roof,” said Luke Richardson, taking part in his first campout fundraiser.

Alex McIntosh, who helped organized the event, said the fundraiser is about giving back to the community.

“We have people in the community impacted by muscular dystrophy,” McIntosh said.

“It’s something that raises awareness, as well as puts us in a good light and it’s just something fun for us.”

McIntosh said 100 per cent of the money raised goes directly to support those with muscular dystrophy.

He said the funds will be used to help purchase mobility equipment, provide support services and fund research to find a cure.

“It is a genetic disorder and it has a very wide range of how it can affect you and some are very debilitating,” McIntosh said.

For some people, the life expectancy is quite low, whereas some people live through it their whole life and just experience symptoms like pain and discomfort.”

Richardson said he’s excited to not only camp out, but support a meaningful cause.

“We’re really excited to be able to give back to something this important to us and there’s a lot of members … that have close ties as to what the cause is for, so it’s really, really good,” Richardson said.

Richardson added that being a firefighter is also about giving back to the community they serve.

“To do these kinds of events and get a lot of community engagement and involvement is just really rewarding,” Richardson said.

Money raised goes directly to support those with muscular dystrophy.

The team said they’re excited to be on the roof and hope to beat their goal of $20,000.

“The only challenge is just being away from family for four days and not having access to running water,” McIntosh added.

“We just want to get up on the roof and hopefully it doesn’t rain,” Richardson said.

McIntosh said a variety of events will be taking place throughout the four days, including a barbeque on Friday from 11 a.m. to 2 pm., followed by a concert featuring The Chevelles at 5 p.m.

The five-person team will come down from the roof on Sunday.

The association is also holding a raffle with a grand prize of a seven-night stay in Hawaii and $1,000 ticket voucher.

The 6 best whole house and portable generators for 2022