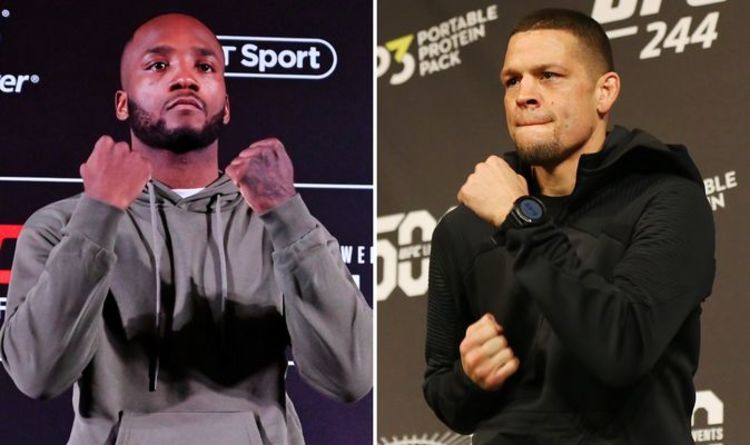 Valtteri Bottas ‘has Williams as only option’…

‘I feel okay’: Christian Eriksen in his first social media…

England’s Edwards is undefeated since a 2015 loss to current UFC welterweight champion Kamaru Usman, and fellow Brit Bisping said that the Birmingham native is one big win away from earning himself a shot at the gold later this year.

Edwards has been on the cusp of a title shot for more than a year.

But the arrival of the COVID-19 pandemic saw his main event bout with former champ Tyron Woodley in London scrapped last March.

And his only bout since, a matchup with Belal Muhammad, ended in unfortunate circumstances after an accidental eye-poke from the Brit forced the bout to be stopped and ruled a no contest.

During that time, former interim champion Colby Covington has been installed as the UFC’s number-one contender to face Usman, who knocked out Jorge Masvidal in their world title rematch earlier this year.

It means Edwards remains on the outside, looking in. But Bisping said that could all change this weekend.

Speaking to Express Sport, the only Brit to capture UFC championship gold said Edwards faced the perfect opportunity to secure a shot at the gold later this year.

“Leon Edwards is a tremendous fighter, and a tremendous athlete, and he’s doing everything he needs to do – he’s winning fights,” he said.

“What’s he on, an eight-fight win streak with one no-contest?  He’s beating people, he’s getting better, he looks dangerous, he looks deadly.

“The only thing I think, personally – and this isn’t an insult – his star power isn’t there, certainly in the States.

“Obviously in the U.K. if you’re an MMA fan, you know Leon Edwards. But in the U.S., (only) the hardcores probably know he is.

“The majority of the fanbase are probably casuals who tune in for Conor McGregor fights and championship pay-per-views and stuff like that.

“They all know who Nate Diaz is, of course, and there’s a huge percentage of pay-per-view buyers tuning in who are going to be fired up for the people’s main event, which is Nate Diaz.”

Bisping said it’s Diaz’s star power that will prove to be a blessing for Edwards, with their specially-arranged five-round welterweight feature bout at UFC 263 on Saturday night serving as the perfect launchpad for a title challenge.

Bisping said there could well be a title shot awaiting either man if they win this weekend.

“But if he beats Leon, he gets a title fight off the back of that, for sure.

“But, what I think’s going to happen is Leon Edwards goes out there and just makes a mockery of him, to be honest.

“I think he’s going to beat him very badly, I do.

“Now, of course, Diaz, you never know. I said that against McGregor. I said ‘McGregor’s gonna destroy this guy’ the first time, and we know what happened.

“And then, Saturday night, after that fight, everyone in America will know who Leon Edwards is, and they’ll all want to see him fight again.

“So all he’s got to do then is wait on the sidelines, maybe six months, and he gets a title shot. … (Beating Diaz would mean) he’d then have the star power to go along with his skills.”

BT Sport 1 will show ‘UFC 263: Adesanya vs Vettori 2’ exclusively live on Saturday 12th June with coverage of the main card, featuring Leon Edwards vs Nate Diaz, from 3am. For more info go to bt.com/sport/ufc