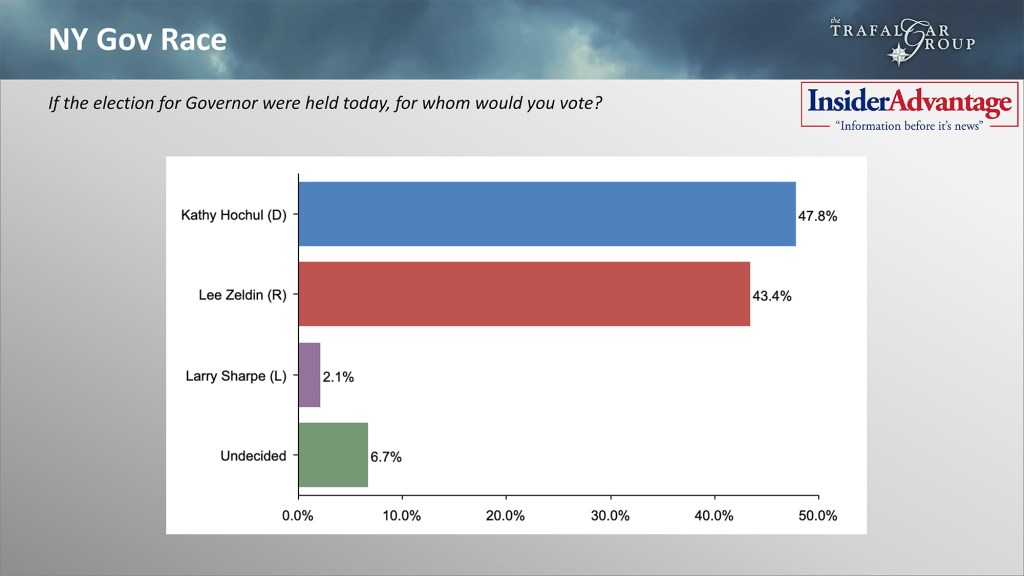 The survey, conducted by the independent Trafalgar Group, found Hochul with just a 4 percent lead over the Long Island congressman — a significant narrowing in a race that has seen Hochul with a lead of up to 24 points.

The poll of 1,091 likely general election voters, conducted on Wednesday and Thursday, pegged Hochul at 47.8% — and Zeldin, at 43.4%, nipping at the Democrat’s heels.

That put the governor’s lead outside the poll’s 2.9% margin of error — but not by much.

An additional 2.7% of respondents said they support Libertarian Larry Sharpe, with 6.7% undecided.

The race’s last poll, released Aug. 23 and conducted by SurveyUSA on behalf of WNYT-TV in Albany, found Hochul with an overwhelming 55% support, compared to 31% for Zeldin and 14% undecided.

“I know the… numbers are surprising,” Robert Cahaly of the Trafalgar Group tweeted Saturday.

“But we at Trafalgar Group have seen a big shift in favor of non incumbents since Biden announced his #studentloanforgiveness package,” Cahaly continued. “No other issue this cycle has enraged middle and working class voters more than this.”

At Last, the Milky Way Gets a Better Close Up