Leaked Switch-esque portable from Logitech could be great for streaming, emulation 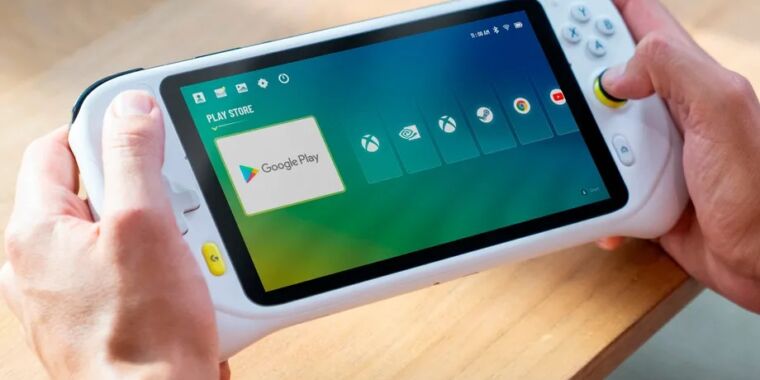 There are many Nintendo-Switch-style, Android-powered gaming handhelds out there, usually available as imports on eBay or AliExpress. Some, like the AYN Odin, are fairly well-regarded. Others, like the Retroid Pocket 2+, are less good, but they’re so cheap that they’re still worth buying for people who want a portable console for old-school game console emulators. But it’s rare for any of them to have backing from a major company, reliable hardware and warranty support, or clear software update policies (beyond occasional Android version updates or support from alternate Android distributions).

That’s why the rumors of a Switch-like, Android-based portable from Logitech caught our eye. Originally teased by prolific leaker Evan Blass (and preserved by The Verge following a DMCA takedown), the handheld is definitely reminiscent of a Switch Lite. It has four face buttons (arranged Xbox-style with the “A” on the bottom and “B” on the right, rather than Nintendo-style with these buttons reversed), left and right shoulder buttons and triggers, asymmetrical dual joysticks, a D-pad, and four other face buttons for various system functions. But the device appears to run a customized version of Android with full Google Play access, and it seems to have built-in access to Microsoft’s, Nvidia’s, and Valve’s game streaming services for portable PC gaming.

Blass points out that the handheld is likely the fruit of a recently announced collaboration between Logitech and Chinese tech company Tencent. In early August, the companies said they would “combine Logitech G’s expertise in hardware with Tencent Games’ expertise in software services” to create a streaming-focused handheld gaming console at some undisclosed future date.

While we know what it looks like, we don’t know the device’s specs, including its SoC, its screen size or resolution, its RAM or storage allotment (it does appear to include a microSD slot on top, however), or its battery life. A faster chip would make the console cost more, but it would also allow it to capably emulate newer consoles like the Dreamcast, GameCube, PS2, and Wii, whereas many cheap portables top out at the original PlayStation or the Nintendo 64.

And pricing will be key. The console could probably afford to be more expensive than some of the $100-ish no-name Android consoles out there, but it would ideally be quite a bit cheaper than x86-based handhelds like the Steam Deck. These consoles are larger and heavier than most Android consoles, but they’re also much more versatile because they’re powerful enough to run PC games directly instead of via streaming. They can also emulate newer consoles at higher quality settings.

Little Mix Solo Projects Since Their Split: A Guide