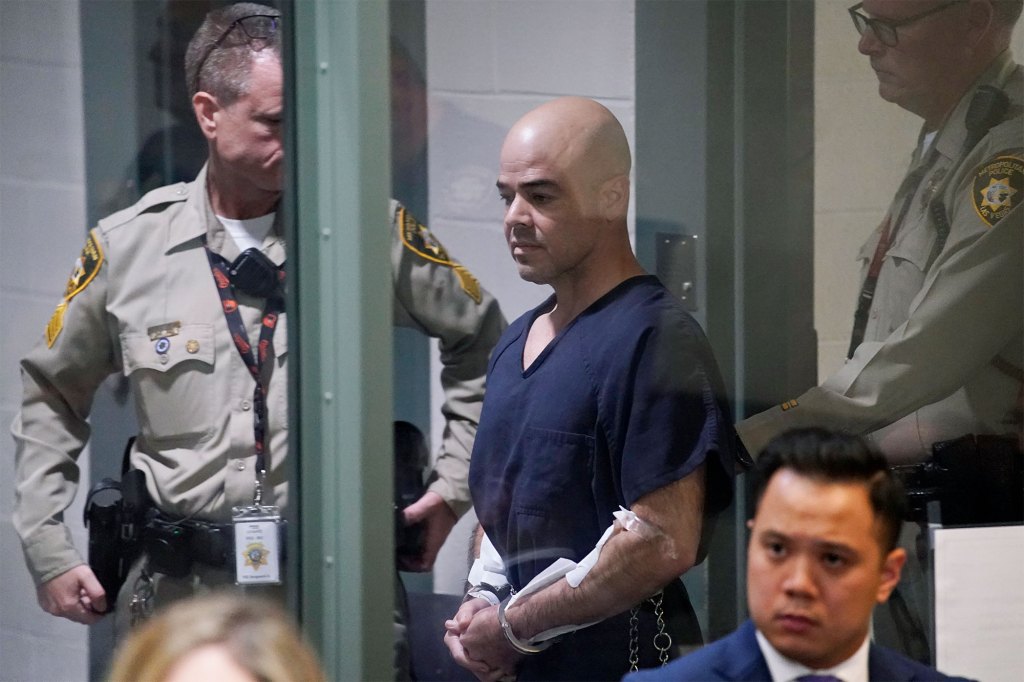 Clark County Public Administrator Robert Telles appeared in front of a judge who ruled the 45-year-old remain in Clark County Detention Center until his next hearing on September 13, according to a CBS affiliate 8NewsNow.

Telles was arrested Wednesday after a two-hour standoff with Las Vegas Metropolitan Police, who found evidence that the public official allegedly stabbed German during a confrontation at the Las Vegas Review-Journal reporter’s home.

The veteran reporter had written a series of investigative pieces detailing misconduct, including Telles’ alleged affair with his 45-year-old staffer Roberta Lee-Kennett.

During the bail hearing in Las Vegas Justice Court, Judge Elana Lee Graham said German, 69, had several defensive wounds as he fought for his life.

A prosecutor said Telles had lashed out “at the unraveling of his life” and German was stabbed seven times.

During a press conference held earlier on Thursday, Capt. Dori Koren, head of the Las Vegas Metropolitan Police Department Homicide and Sex Crimes Bureau, said investigators found DNA evidence on Telles and other incriminating evidence inside his home, including a straw hat and gray sneakers that were cut into several pieces.

The hat and the sneaker were cut up “in a manner that was likely an attempt to destroy evidence,” Koren said.

“Right now we can speculate on the motive beyond what was already discussed,” Koren said. ” We know that Telles was very upset about German’s reporting already about his role as a public administrator and everything else that followed with that.”

Video surveillance from near the crime scene showed a man wearing a large straw hat, an orange shirt with reflective stripes, black pants and gray sneakers walking to and from German’s home on August 3.  Authorities responding to a 911 call around 11:30 a.m. found the veteran reporter unresponsive and lying outside of his home.

Investigators also identified a red GMC Denali driving around German’s street the morning of the murder. On Tuesday, Telles was seen cleaning his red SUV in front of his home.

Koren said Telles was further upset because he found out German was working on more articles to expose other misdeeds. The investigative reporter recently filed public records requests for emails and text messages between Telles, Lee-Kennett, assistant public administrator Rita Reid and consultant Michael Murphy, according to the Las Vegas Review-Journal.

German had previously reported Telles and Lee-Kennett, who was as estate coordinator, was having an “inappropriate relationship” with Telles. Some employees who worked under Telles had filed various complaints with the county and secretly recorded his alleged trysts with Lee-Kennett.

In one video, Telles and Lee-Kennett are seen together in the back of her car at a parking garage. The two then got out of the vehicle with Lee-Kennett pulling down and fixing her skirt.

Telles denied the accusations of the affair and allegations made by other staffers that he bullied them, while favoring his alleged mistress, the Las Vegas Review-Journal reported

Telles, a Democrat who was running for re-election, came in third place during the June primary. The embattled administrator posted a letter criticizing German’s reporting on his website and repeatedly mocked the veteran reporter on Twitter.

Telles was arrested and wheeled out of his home in a gurney and placed into an ambulance after a two-hour standoff with police. He was rushed to a local hospital and treated for non-life threatening injuries.

Clark County officials released a statement on Thursday and said they were aware of issues with Telles a couple of months ago. They said staff members were instructed to no longer report to Telles until he would be replaced in November.

“The death of Jeff German was both shocking and tragic, and we join with our community in being stunned at how this situation has continued to evolve over the last few days.,” county officials said.

According to the Review-Journal, German’s family held a private service on Wednesday and released a statement on his death.

“Jeff was a loving and loyal brother, uncle and friend who devoted his life to his work exposing wrongdoing in Las Vegas and beyond. We’re shocked, saddened and angry about his death,” the family said.

“Jeff was committed to seeking justice for others and would appreciate the hard work by local police and journalists in pursuing his killer. We look forward to seeing justice done in this case. We also want to thank everyone for the outpouring of love, support and recognition for Jeff and his life’s work.”