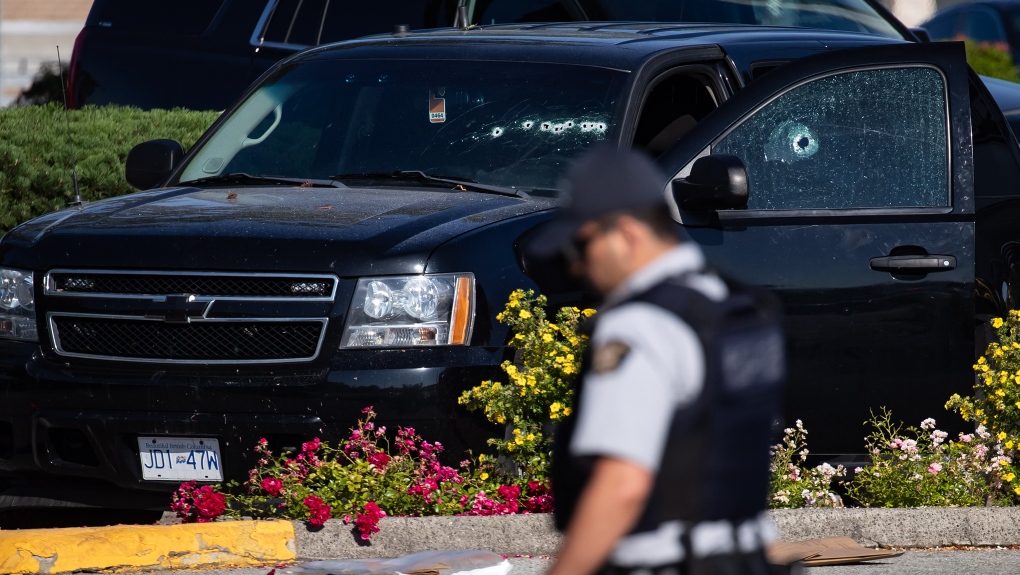 A deadly shooting with multiple victims unfolded over the course of several hours in Langley, B.C., Monday, leaving investigators working to establish a motive.

Three people were killed – including the shooter– and two more were injured in multiple locations throughout Langley. Authorities identified the shooting suspect as 28-year-old Jordan Daniel Goggin, who was fatally shot by police.

While many British Columbians woke up to an emergency alert sent to their cellphones warning of the shooting at about 6:20 a.m. Monday, police said in an afternoon briefing the incident began hours earlier. First responders were called to incidents as they unfolded and eventually they were linked together.

Midnight – Police said the first shooting was reported near 203A Street near Fraser Highway. At that scene, a woman was found in critical condition.

3 a.m. – Police said a second shooting was reported around this time near Creek Stone Place, a supportive housing complex on 201 Street. One man was found deceased in this area.

5 a.m. – At the Langley City bus loop near Logan and Glover roads, another man was found dead.

5:45 a.m. – A fourth victim was found shot in the leg near Langley Bypass and 200th Street. Around this time police also engaged with the suspect and shot and killed him. Investigators didn’t provide an exact time of when that interaction happened.

6:19 a.m. – Emergency alert sent out to B.C. cellphones. The alert said, “Multiple shooting scenes in the downtown core in the city of Langley with one incident in Langley township involving transient victims. Male is described as Caucasian, dark hair, wearing brown Carhartt overalls and a blue and green camo T-shirt with red logo on right sleeve associated to a white car. Police have interaction with one suspect, unknown if others involved at this time. Please remain alert and out of the area.”

7:22 a.m. – A second emergency alert was sent, this time saying, “Update: Suspect police interacted with is no longer a threat. Efforts still being made to confirm only one suspect is involved. Please remain alert and out of the area.”

11:23 a.m. – Police confirmed in a news release officers shot and killed the suspect, though timing of when that encounter isn’t confirmed.

3:32 p.m. – A third emergency alert is sent saying, “Cancel public safety alert Langley and surrounding areas. The RCMP has determined the threat to the (public) has passed and the public can resume normal activities.

Police confirmed Monday that two people were killed and two were injured in the shooting spree, though they said some closed businesses may also have been shot at throughout the early morning hours.

Few details have been given about the victims, with investigators saying next-of-kin notifications are ongoing. However, an outreach worker confirmed with CTV News Vancouver she knew the two who died.

“I cried (when I found out), because I saw them last Wednesday,” Kimberly Snow, who works at Kim’z Angels, said. “These two are just amazing souls that come get food and get clothes. You chat with them and hear their stories. They become part of your family.”

Snow confirmed both were living on the street. One was planning to leave Langley soon in the hopes of starting a new chapter.

Bullet holes are seen in the windshield and passenger window of an RCMP vehicle at the scene of a shooting, in Langley, B.C., on Monday, July 25, 2022. A suspect is in custody after “several people” were shot in the Metro Vancouver city of Langley, RCMP said. THE CANADIAN PRESS/Darryl Dyck

Police identified Goggin as the shooting suspect late Monday afternoon. He was 28 and known to police, but for what they described as “non-criminal contact.”

Officers did not give any further information on their previous interactions with Goggin, nor did they say what connections he may have had to Langley or why they think he was there at the time.

Police said they’re still working to understand a possible motive or connection between the suspect and the victims.

“Everybody in our community should know that this was an isolated incident as far as we know and we are doing everything we can to help people,” she said.

“I want to say to the community: we’re strong, we’ll get through this. We’ve been through lots before.”