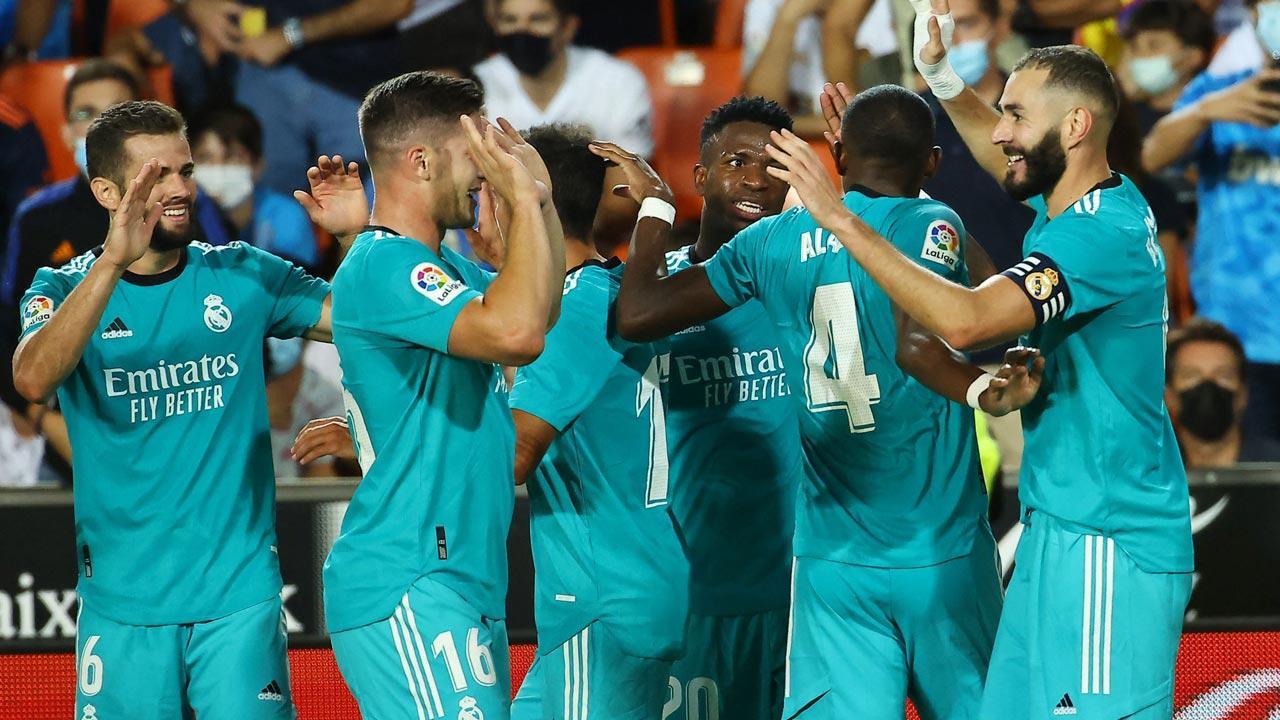 Real Madrid came from behind to win 2-1 away to Valencia and open up a two-point gap at the top of La Liga on Sunday night.

Carlo Ancelotti`s side looked to be heading for defeat in the game between the top two in the table as Valencia`s high-pressing game had them on the back foot and trailing after Hugo Duro put the home side ahead in the 66th minute.

Duro hit a left foot shot that took a deflection on its way past Thibaut Courtois and the goal sparked more life into Real Madrid and in the last 15 minutes Valencia were guilty of sitting deep and trying to defend their lead.

Vinicius Jr levelled for Madrid in the 86th minute with his shot also taking a big deflection to wrong-foot Valencia keeper Giorgi Mamardashvili and the Brazilian had a hand in his side`s second goal two minutes later when he crossed for Karim Benzema to score off his shoulder, Xinhua reports.

Mallorca and Villarreal drew 0-0 on Sunday in a game that was more entertaining than the final score suggests, with Villarreal (who have drawn their last four games) having the best chances.

Real Sociedad and Sevilla also failed to trouble the scoreboard in a duel between top-four hopefuls in San Sebastian. Sevilla will probably travel home happier with the points than the home side, who saw Mikel Oyarzabal`s poor penalty saved by Sevilla keeper Bono.

Leandro Cabrera scored a 97th minute equalizer to save a point for Espanyol in a 2-2 draw away to Betis.

Aleix Vidal side-footed Espanyol ahead in the 16th minute, but Willian Jose and Nabil Fekir turned the score around for Betis before the break.

The home side were reduced to 10 men in the 78th minute when German Pezzella was shown a direct red card and in the time added on after that incident Cabrera powered home from the edge of the area.

Atletico Madrid dropped two points after being held to a 0-0 draw by an effective and disciplined Athletic Club side that had the best chances to win the match.

Atletico Madrid`s only chance was a Marcos Llorente shot which bounced off the post in the second half and the visitors would have taken all three points if Inaki Williams (who was making his 200th consecutive league appearance) or Asier Villalibre had hit the target with just Jan Oblak to beat.

Atletico`s frustration was compounded when Joao Felix was sent off in the 77th minute for insulting referee Gil Manzano.

Former Atletico striker Radamel Falcao scored on his debut to round off Rayo Vallecano`s 3-0 win over Getafe on Saturday lunchtime. Oscar Trejo`s ninth minute penalty opened the scoring and Pathe Ciss`s 78th minute header doubled Rayo`s lead against a rival that has lost all five games.

Alaves are also without a point after losing 2-0 defeat at home to Osasuna, who claimed all three points thanks to a David Garcia header in the 21st minute of the game and a 28th minute penalty from Roberto Torres following a handball in the Alaves area.

The round of matches kicked off as Cadiz won 2-1 away to Celta Vigo thanks to goals from Anthony Lozano and Alfonso Espino, who scored from close range after a penalty.

Check out all the latest news and updates on IPL 2021

This story has been sourced from a third party syndicated feed, agencies. Mid-day accepts no responsibility or liability for its dependability, trustworthiness, reliabilitsy and data of the text. Mid-day management/mid-day.com reserves the sole right to alter, delete or remove (without notice) the content in its absolute discretion for any reason whatsoever

30 Hilarious Jokes To Make You Look Like A Comedian