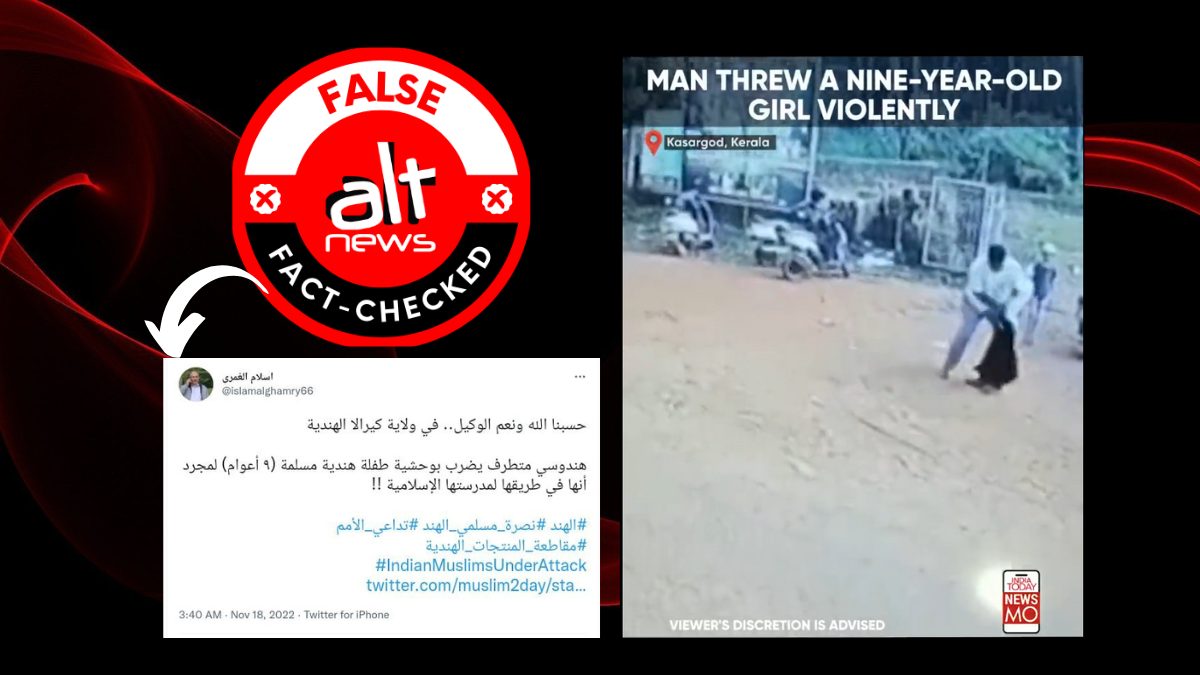 The CCTV footage of a man violently flinging a child on the ground has created an uproar on social media. News reports mentioned that the reason for the man’s behaviour was still unclear and the girl had been sent for a medical examination.

Several social media users, mostly from abroad, shared the video and claimed the man in the video was a Hindu.

Twitter handle @islamalghamry66 from Turkey also shared the video. The caption can be translated as: God is enough for us, and He is the best disposer of affairs. In the Indian state of Kerala, an extremist Hindu brutally beats a 9-year-old Indian Muslim girl just because she is on her way to an Islamic school!!

Another user, @Fnyees, shared the video with the same claim adding how discrimination against Muslims in India was growing under the present regime.

We noticed that India Today reported that the accused was named Abubakar Siddique and he had been arrested by the Kerala police. The footage tweeted by the media outlet had ‘Kasargod, Kerala’ mentioned on top left corner.

Alt News reached out Kasargod police for a confirmation, who asked us to contact the Manjeshwar police station. We then spoke to inspector Santhosh Kumar of Manjeshwar police station in Kasargod, who confirmed that the incident had taken place on November 17, around 8 am., and the accused, Abubakar Siddique, had been arrested and sent to judicial remand for 14 days. According to police, he has been charged under IPC section 307 (attempt to murder), 323 (for voluntarily causing hurt), IPC section 364 (abduction with the intent of murder) and sections 9 and 10 of the POCSO (Protection of Children from Sexual Offences) Act. The police mentioned that the man claimed he was smoking at a shop nearby and reacted violently upon being provoked by the girl. However they are unsure of the claims.

Hence, the tweets from Turkey and Saudi Arabia claiming a Hindu man assaulted a 9-year-old Muslim girl is false.