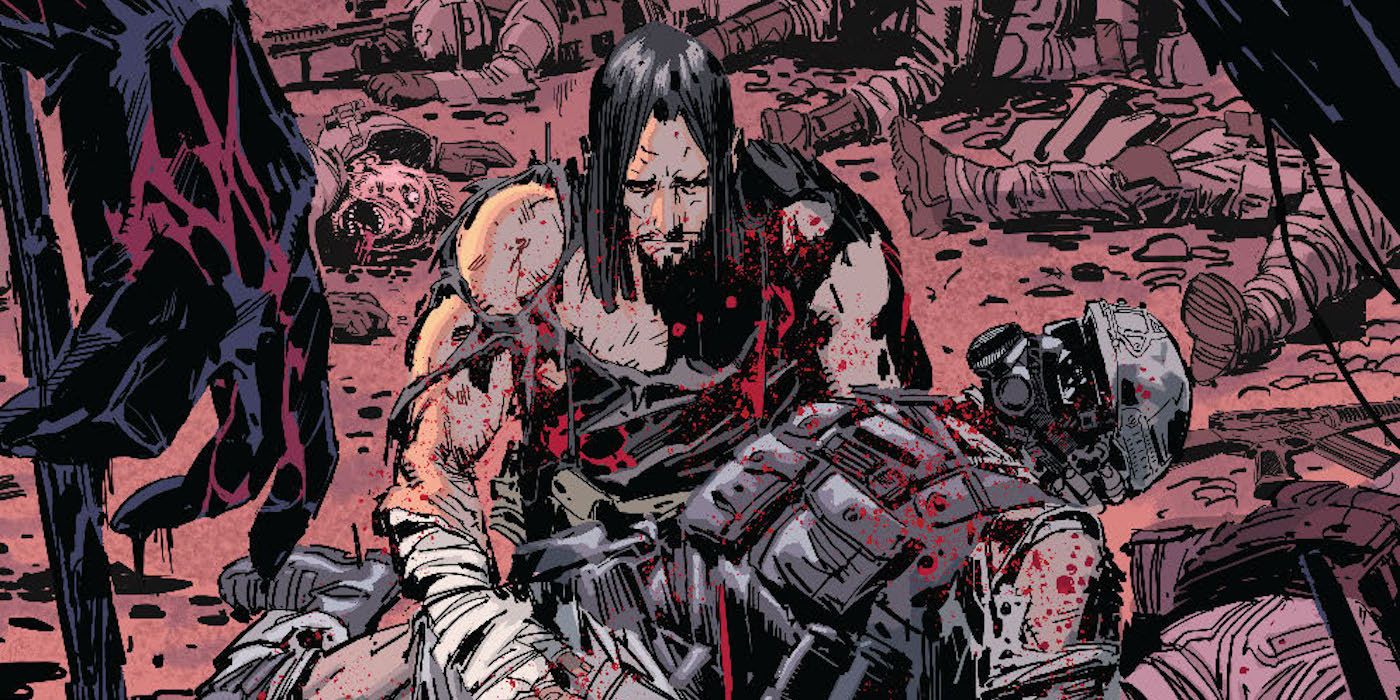 After the audience enthusiastically welcomed the panel, host Coy Jandreau immediately jumped in.

In response to where the idea for the title came from, Reeves dryly explained, “Well, I had this one idea of someone punching people right through their chest.” Slipping into a more serious tone, he continued, B was someone “cursed by violence trying to find out who he is.” While the idea of a comic had not occurred to him until he met with BOOM! Studios, Reeves quickly concluded that it was, “a very fine idea,” after the team suggested it to him.

It’s been a choice that has paid off according to the creator. “Everyone at BOOM! has really curated my experience in a really special way,” Reeves asserted.

Artist Ron Garney agreed that BRZRKR had proven a very special project, explaining, There’s “so many layers to [BRZRKR]…it’s really just a huge exercise in everything you can do in comics.”

Jandreau expressed that he found to B to be an archetypal character that fit well in a variety of scenarios and mediums. The panel discussed how their attitude towards continuity has aided that reality. They are committed to the character’s personality and core, beyond that are open to where the character should go or has been. As Matt Kindt points out, “There’s 80,000 years of [B’s life], where can’t we go?”

The openness of continuity is also allowing for BRZRKR to slip easily into other mediums. Mattson Tomlinson is hard at work scripting the feature film although Stephen Christy notes the process is still in the early stages. It is not, however, the only project in other medium focused on B’s adventures.

BOOM! is working with Production I.G., the studio behind such anime as Ghost in the Shell, to bring an anime adaptation to life. Also early in the process, they nonetheless have already secured an agreement with Netflix to stream two seasons of the series.

Jandreau returned focus to the comic, jokingly attempting to extract spoilers from Reeves. The creator refused, beyond declaring the entire team is, “geeked” about it and that it will close on a double issue is planned for the series conclusion in 2023.

Elsewhere in print, Random House is working with Reeves to release a novel set in the BRZRKR universe. Reeves is set to collaborate with an author that he refers to as “one of his favorite authors.” Despite his expressed desire to reveal who his collaborator is, Reeves said, “out of respect for Random House, I can’t say.” He added with a growl, “Sometimes you have to be a team player.”

“We’ve been speaking and doing outlines and talking concepts,” Reeves continued before confirming the author has started working on it at this time.

Kindt expressed excitement for the novel explaining that he and the BOOM! Studios team was focused on the best comic possible and the further adaptations were, “just the cherries on top.”

Best 4k Projector Options for Your Business in 2022

Reader Discussion: What Did You Name The Cat In Stray?

Amazon’s ‘A League of the Own’ Falls Short of a…