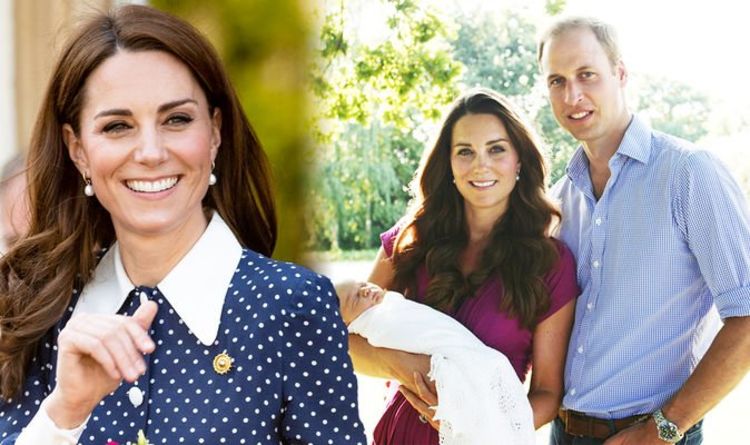 The Cambridges stood in their garden for a picture taken by Kate’s father Michael Middleton.

The Duchess wore a short sleeved purple dress and a pair of pearl earrings.

Head of diamonds and jewellery at Beaverbrooks Lorna Haddon explained how the timeless pearls gave the Duchess a “motherly” look in her first month as a parent.

Lorna said: “I think everyone remembers the photos from the hospital after Kate gave birth to the lovely Prince George.

“A new generation of the Royal Family had arrived.

“Kate’s signature style just shines through in their first photoshoot as a new family the following month.

“Her trademark pearl earrings are so classic and really convey her sophisticated motherly image.”

The earrings feature a small pearl hanging from a gold hoop.

She has recently sported a necklace with the initials of her three children as the charms.

The 39-year-old also famously wears the engagement ring which once belonged to Princess Diana.

The sapphire and diamond jewel was given to Kate when Prince William proposed in 2010.

Since then, Kate has rarely stepped out in public without it.

The royal line of succession – who outranks who?

The line of succession to the British throne dictates the order in which each member of the Royal Family would ascend to the throne.

It is also seen as a ranking of importance with the head of the line, the Queen, taking the place of ruler.

Older children come before younger children. Traditionally boys came before girls, but this law was changed on March 26, 2015 before the birth of Prince William’s first child.

Incredibly, Catholics are still excluded from the line of succession, as are children born outside of wedlock.

The royals, who usually stick to a strict protocol when appearing in public, often arrive at events in ascending order of importance, with the most important royal arriving last.

Prince Charles, 72, is currently first-in-line to the British throne, followed by Prince William, 39, his oldest son.

Then comes Prince William’s children, George, seven, Charlotte, six, and Louis, three, and they are followed by Prince Harry, 36. Prince Harry is succeeded by his son Archie Harrison, born in May 2019.

Travel latest: Spain saved from red list and 10 countries to…

Travel latest: Spain saved from red list and 10 countries to be added to green |…

Does prune juice help with constipation?

Camping holidays: What to bring to the campsite besides a tent | Travel News | Travel