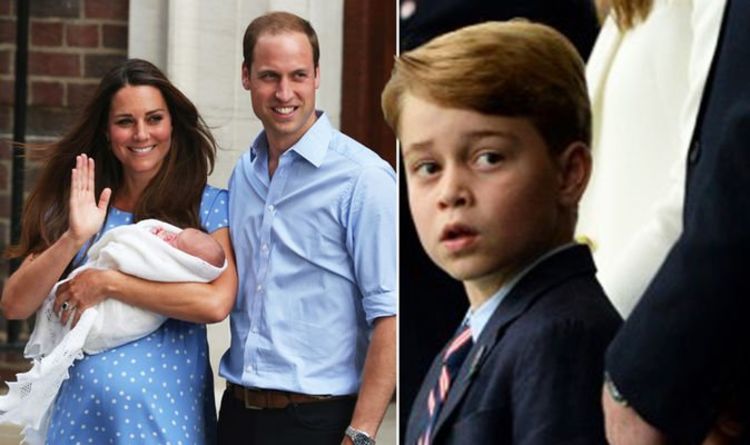 Most recently the young prince delighted fans at the Euros final with his mother and father. On his birthday, Express.co.uk look at royal parenting.

Judi told Express.co.uk the couple has changed in their approach to parenting as they have aged and added to their brood.

“There’s something sweetly bashful about Kate Middleton and Prince William’s body language here as they present their son and their first child to the world,” the expert said, commenting on images of Kate and William outside of the Lindo Wing, where the young Prince was born.

The private maternity wing of St Mary’s Hospital, where suites cost £7,500, is where the Duchess of Cambridge has had all three of her children.

Judi said: “Kate is cradling her son rather gingerly here and the couple leans together in shared delight and pride mingled with some small signals of first-time-parent anxiety.

“As Kate offers a tentative ‘hail’ hand wave to the crowd William places an arm around her as though keen to protect both his wife and his son.”

Now the Prince is older and has been joined by two younger siblings.

Judi said: “Eight years later and we can see the now parents of three small children take a more experienced, relaxed and practical approach with their son and heir to the throne.

“Despite those initial impulses to protect and perhaps to keep away from the cameras, William and Kate now look as though they are confident they have taught their son the most important life lesson, which is how to stand on his own two feet with an air of independence.

DON’T MISS
‘Who dresses a child like that?’: Anger over Prince George in suit [FURY]
‘She would love him to’: Kate’s hope for George [PARENTING]
Kate’s mysterious sapphires from the Queen [ANALYSIS]

“Throwing loving grins at one another behind George’s back and with William’s mouth-smile puckered in pride, the Cambridges look happy to stand away and slightly back to allow their suit-and-tie-clad son to appear in the spotlight in his own right.

“We have previously seen George walking hand in hand with his father or mother, keeping beside them in a way that suggested he was being carefully mentored for his future role as King, but here he stands alone in front of a noisy and boisterous stadium of football fans.”

The third-in-line to the throne is being treated as a young adult by his parents.

“Kate and William allow George to appear more as a young man rather than a child here although they were both on hand to offer chat and information about the match as well as some shared rituals of triumph when England scored plus some touches and hugs of commiseration when they lost,” Kate said.

Dubai holidays back on as UAE moved to amber list –…

“From doting and rather cautious and anxious new parents to parents who can calmly and proudly begin to stand back and allow George the kind of independence and confidence he will need in future, as well as parents who appear determined to ensure he also has a ‘normal’ life in terms of playful fun and adventures, William and Kate have moved deftly and cleverly over the past eight years, with William clearly taking all he learned about pitfalls and problems from his own childhood and putting in place a plan that so far appears to be incredibly successful.”

Kate Middleton’s appearance with George at the Euros finals her compared to the late Princess of Wales, Diana.

Fans were quick to make the comparison on social media site Twitter.

Emmerdale star Lisa Riley took to Twitter to remark on the picture, which had a number of fans in delight.

She wrote: “I just love this photo so much.

“Mum and son celebrating, you really get a sense of honesty, feeling and truth about this photo.

“Nothing forced, fake, or achieved for personal gain.”

She claimed the hug is “how Princess Diana would have reacted.”

Realme is now ahead of former parent Oppo in India