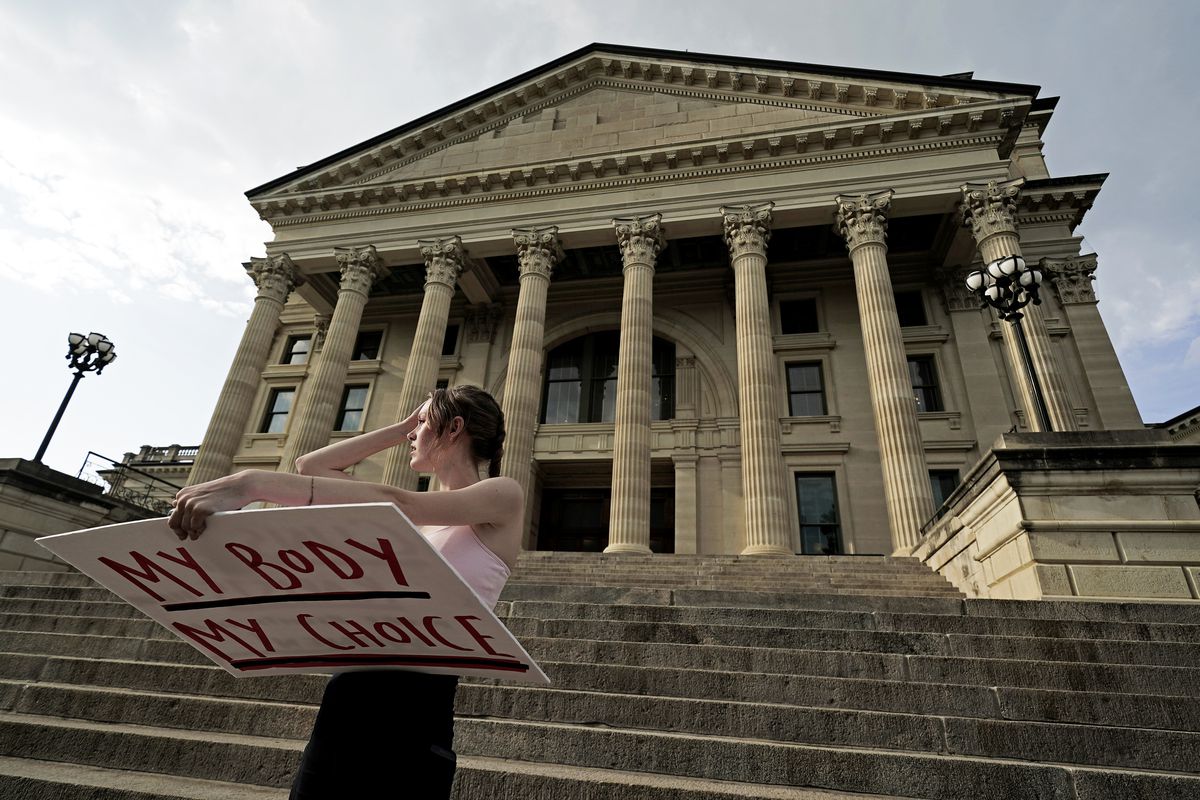 On August 2 in Kansas, abortion rights is facing the first test at the polls since the Supreme Court overturned Roe v. Wade.

In 2019, Kansas’s Supreme Court ruled that the state’s constitution protects the right to an abortion. Now voters are asked to weigh in on a proposed amendment that would explicitly remove that right, opening the way for Kansas’s Republican-controlled legislature to further restrict or ban abortion, just as neighboring Texas, Oklahoma, and Missouri have done.

The other elections taking place Tuesday are the state’s Democratic and Republican primaries, although registered independents — who compose 29 percent of Kansas’s electorate — may also vote on the abortion amendment. The timing is intentional: Republican lawmakers placed the measure on the August primary ballot instead of into the November general election in hopes that turnout remains low. Republicans outnumber Democrats in the state roughly two to one.

Four other states will vote on abortion-related ballot measures later this year, all in November. In Kansas, millions of dollars are pouring in from supporters and opponents of the amendment, and the outcome is being closely watched nationwide as a potential signal of how energized voters are about abortion rights.

The outcome will also have major implications not only for Kansas residents but also for women from across the region who depend on Kansas for reproductive care as their own states shut down abortion access. The Guttmacher Institute predicts Kansas could see a more than 1,000 percent increase in abortions in the post-Roe era as neighboring states outlaw the procedure.

You’d be forgiven if you had trouble making sense of the amendment’s text, which would add a paragraph to the state’s constitution that says both “Kansas does not require government funding of abortion” and that people, through their elected officials, “may pass laws regarding abortion, including, but not limited to, laws that account for circumstances of pregnancy resulting from rape or incest, or circumstances of necessity to save the life of the mother.”

The language could trip up your average voter, said Neal Allen, a political scientist at Wichita State University. “You could read it and think you were voting to eliminate state funding of abortion when there is no state funding to abortion,” he told Vox. “And there is language that refers to exceptions to preserve the health of the mother, and for rape and incest, but there’s nothing about the amendment itself that would create those exceptions.”

Supporters of the amendment, organizing under the banner of “Value Them Both” — a reference to valuing “women and unborn children” — have been working to convince voters that a “yes” vote on the amendment would not lead to an abortion ban and would simply allow lawmakers to regulate the procedure.

Many of their claims have been dubious at best, and have generated significant confusion. Value Them Both supporters have stressed in their advertisements that the amendment “restores our ability to place basic regulations on the abortion industry.” In fact, abortion remains highly regulated in Kansas. They say the amendment would merely allow lawmakers to impose rules like requiring parental consent, “stopping painful late-term abortions,” and barring public funding of abortion. But Kansas already requires parental consent, already bans public funding of abortion, and already bans abortion after 22 weeks.

If the amendment passes, nothing could stop Republican lawmakers from passing a total or near-total abortion ban, and political experts say the likelihood of such restrictions moving forward in that context is very high.

Richard Levy, a constitutional law professor at the University of Kansas, told Vox that even though the amendment is not itself a ban on abortion, it’s safe to assume Kansas lawmakers would adopt highly restrictive abortion laws if the amendment passes. He pointed to the supermajority of Republicans in the House and Senate, the Kansas legislature’s long history of adopting laws intended to limit abortion, and to the fact that the amendment’s supporters have indicated that’s their goal.

Earlier this spring, a Kansas Republican lawmaker introduced a bill to ban abortion statewide with no exceptions for rape or incest. It did not receive a hearing or vote, but last month a regional director from the Value Them Both coalition was caught on tape telling a group of Republicans that they stand ready to support the bill if the amendment passes. A Value Them Both spokesperson did not return Vox’s request for comment, but told Kansas Reflector that the regional director “is no longer with the organization and didn’t speak on behalf of the coalition.”

Kansas — a reliably Republican state at the national level — has a long history of conflict over abortion rights. In 1991, a Wichita abortion clinic, at the time among the few in the country that would provide third-trimester abortions for women with life-threatening pregnancies or severe fetal abnormalities, became a magnet for protesters in what was seen as a sign of an emboldened national movement against abortion rights. In 2009, the doctor who performed those abortions, George Tiller, was murdered while attending church.

The Kansas state legislature banned abortion after 22 weeks in 2012 and passed a law in 2013 stating that life began at fertilization. But voters in Kansas have repeatedly expressed opposition to full abortion bans. One poll released last year from Fort Hays State University found 60 percent of Kansas residents opposed making abortion illegal in all circumstances, including in instances of rape, incest, or where a woman’s health is at risk.

A narrow majority of respondents — 50.5 percent — also said their state government “should not place any regulations on the circumstances under which women can get abortions” compared to just a quarter who disagreed.

The first public poll of the Kansas amendment was released last Wednesday, and found only 5 percent of likely primary voters supported a total abortion ban. Near-total bans, such as those passed in neighboring states, were also deeply unpopular with survey respondents.

Russell Arben Fox, a political science professor at the Wichita-based Friends University, also believes Republicans would “absolutely” pursue a ban on abortion if the amendment were to pass.

“The simple truth is that anyone with even a minimal understanding of Kansas politics must realize that pursuing a total ban is exactly the kind of policy that the Republican leadership will pursue,” he told Vox. “Besides the obvious influence which fervent anti-abortion conservatives have long had within the Republican Party in Kansas, and besides the fact that one of the leaders of the pro-Value Them Both movement was caught on tape … there is also the fact that we know that game plans detailing the introduction and passage of complete state abortion bans, prepared by the National Right to Life Committee, have been circulating among top Republicans in Topeka all summer.”

The amendment’s language is confusing

One of the first hurdles for organizers working to preserve abortion rights in the state is helping voters understand what they’re voting on.

Ashley All, a spokesperson for Kansas for Constitutional Freedom, the coalition organizing against the amendment, told Vox it’s been “pretty challenging” to make sure that voters understand the implications of the proposal.

The amendment is in response to a 2019 Kansas state Supreme Court ruling that concluded the state constitution’s protection of personal autonomy includes an individual’s right to end a pregnancy.

The Supreme Court case came about from a challenge to a 2015 ban passed by the Kansas legislature on dilation and evacuation, a second-trimester abortion procedure. Following the 2019 decision, the D&E ban was struck down as unconstitutional.

Abortion restrictions are not inherently prohibited, the state Supreme Court ruled, but as of 2019 they must be narrowly tailored, which the D&E ban wasn’t. Value Them Both supporters argue that all restrictions are now “presumed unconstitutional,” though legal and political experts say that’s a poorly supported position.

“In the three years since the decision was handed down, only the law originally challenged in the lawsuit and one additional Kansas abortion law, one dealing with the excessive health regulations the state government has imposed on abortion clinics, has been overturned,” noted Fox.

It’s going to be close

Though Kansas is a Republican state that leans conservative, it has some distinguishing characteristics from other neighboring red states. Allen, from Wichita State University, says one factor is that Kansas has a relatively higher percentage of college-educated whites, which Democrats made gains with during the Trump era.

Neal also attributes state-specific factors that have helped Democrats over the last decade, such as highly unpopular Republican tax cuts that hurt schools and other public services. In 2018, Kansas voters elected Laura Kelly, a moderate Democrat, to be governor.

Both sides spent millions of dollars ahead of August 2, each emphasizing language in advertising around freedom from government overreach. Financial disclosure forms filed recently showed that Kansans for Constitutional Freedom raised more than $6.5 million to fight the amendment, while Value Them Both raised about $4.7 million. Most of the funding in support of the amendment has come from religious groups, the Archdiocese of Kansas City in Kansas in particular.

A public poll of the campaign released in July found 47 percent of likely primary voters planned to vote for the amendment, and 43 percent planned to vote against it. But the pollsters also found Democrats were significantly more likely than Republicans to say the abortion amendment “increased the importance of voting in this upcoming election” — suggesting differences in motivation.

Past political science research has found a “status quo bias” when it comes to abortion-related ballot measures; voters are more likely to reject measures on Election Day they otherwise tell pollsters they support. These dynamics bode well for advocates who want to keep the state constitution unchanged.

Allen, from Wichita State, thinks Kansas for Constitutional Freedom is still “an underdog” but wouldn’t be surprised if the amendment fails. “And that’s not what most of us who pay attention to Kansas politics thought six months ago,” he told Vox, attributing the shift primarily to the national backlash to the Dobbs decision, as well as to the fact that the new laws in neighboring states give more detail into what’s possible if the amendment passes. Young, independent voters in particular could be pivotal to the final outcome, Allen predicts.