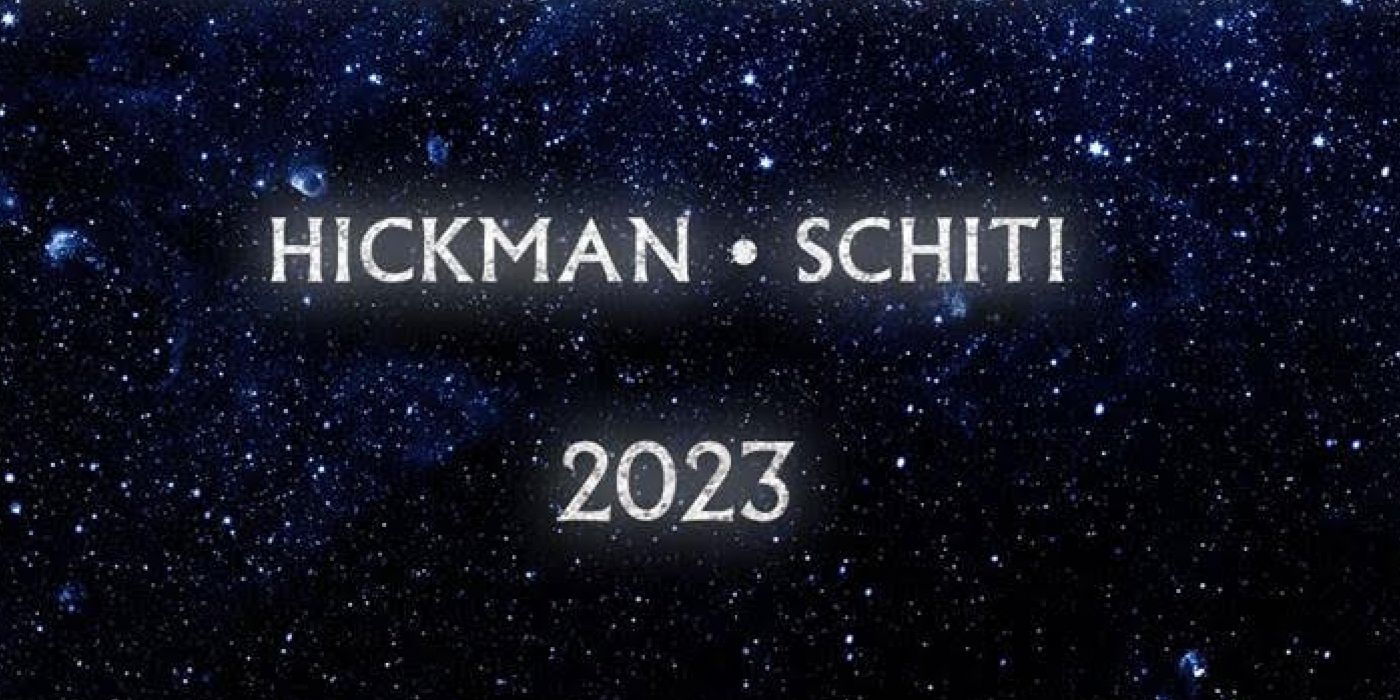 During the “Marvel Comics: Next Big Thing” panel at San Diego Comic-Con on July 23, Marvel teased a new mystery project from Hickman and Schiti. The publisher released a teaser poster for the project with text reading, “What happens when the powers that be meet the natural order of things?” The project is scheduled to launch in 2023, with more details to come at a later date.

RELATED: SDCC: Marvel’s Next Big Thing for Spider-Man, X-Men and Others

Speaking at SDCC, Hickman said, “I’ve been working on this for three years. That message will not sound like gibberish when the first issue comes out.” He also mentioned the new, still unnamed project is “like the Sandman of the Marvel Universe.”

Hickman is a well-known name in the world of Marvel Comics. His first ongoing series, Secret Warriors, launched in 2009 and sees Nick Fury work with a team of superheroes in various espionage adventures following the events of Secret Invasion. In 2009, Hickman also began working on Fantastic Four, beginning with the Dark Reign: Fantastic Four limited series before he boarded the main series with Fantastic Four #570. After his Fantastic Four stint, Hickman took over The Avengers and The New Avengers, which incorporated Marvel’s “Infinity” from 2013 and 2015’s “Secret Wars” storylines.

Following “Secret Wars” and a brief hiatus, Hickman went on to work on a number of X-Men titles for Marvel. He ushered in the “Dawn of X” era and worked on the X-Men main series for a time before announcing his departure from the property in 2021. In May 2022, Marvel announced Hickman would join Neil Gaiman, Kurt Busiek and several others in creating Amazing Fantasy #1000, a new anthology honoring the 60th anniversary of Spider-Man. The synopsis for the one-shot, which releases on Aug. 31, reads, “The comic that brought you SPIDER-MAN hits issue #1000! We’re going big to celebrate in this, our thousandth issue of AMAZING FANTASY! An ALL-STAR roster of creators are coming together to celebrate Peter Parker and Spider-Man’s birthdays!”

Schiti has also worked on numerous Marvel titles in the past, including Guardians of the Galaxy, Tony Stark: Iron Man, Journey Into Mystery and many others. Schiti is the artist on Marvel’s A.X.E.: Judgment Day crossover, an event now kicking into full gear which sees the Avengers, Eternals and X-Men all face one another on the battlefield.

The Hickman and Schiti mystery project will launch in 2023 from Marvel Comics.