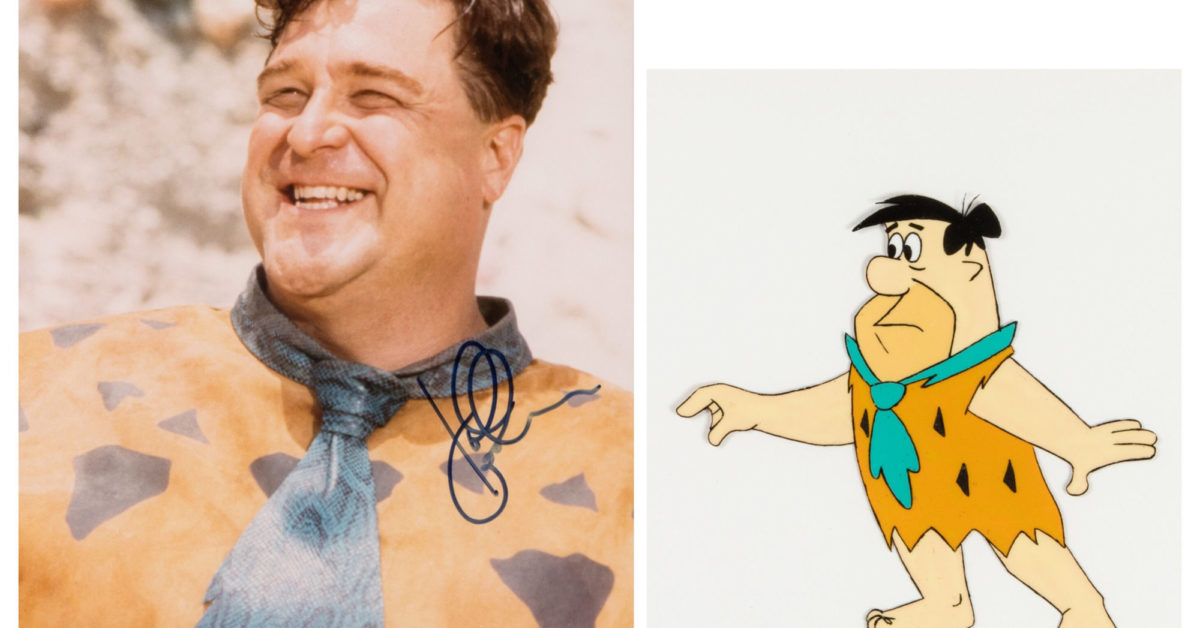 This is a cool one, Flintstones fans. The Flintstones debuted in the 1960s as a Hanna-Barbera Production. The animated sitcom focused on Stone Age sitcom husband Fred Flintsone and his family of wife Wilma, child Pebbles, and pet dinosaur Dino as well as their friends Barney Rubble, Betty Rubble, and their kid Bamm-Bamm. Fred Flintstone became a cartoon icon. When the series was later adapted into a live-action film by director Brian Levant and writers Tom S. Parker, Jim Jennewein, and Steve E. de Souza in 1994, actor John Goodman of Roseanne fame was cast as Fred. Goodman played Fred Flintstone to perfection, creating a memorable performance. Now, fans of Goodman and the entire franchise can now head over to Heritage Auctions for a unique listing. This auction features not only a signed photograph of John Goodman as Fred but also an animated production cel featuring the character as we all originally know him.

For Fred Flintstone, “worlds are colliding” as the original cartoon character is pared with his live-action counterpart! Included in this framed display is an original hand-painted production cel with a 5.25″ tall full-figure image of Fred from The Flintstones Comedy Hour, plus a signed publicity photo of John Goodman as Fred from the 1994 live-action movie The Flintstones. Yabba-dabba-doo! The photo and cel are matted together, with opening sizes of 7.25″ x 9″ (photo) and 9.5″ x 8.25″ (cel). The display is framed with glass for an overall size of 12″ x 14.75″. Condition is Fine. The frame is sold as-is.

Fred Flintstone fans and John Goodman lovers, you can now head over to Heritage Auctions and place your bid on this pair of incredible, nostalgic items. Best of luck to everyone attempting to bring this lot home!