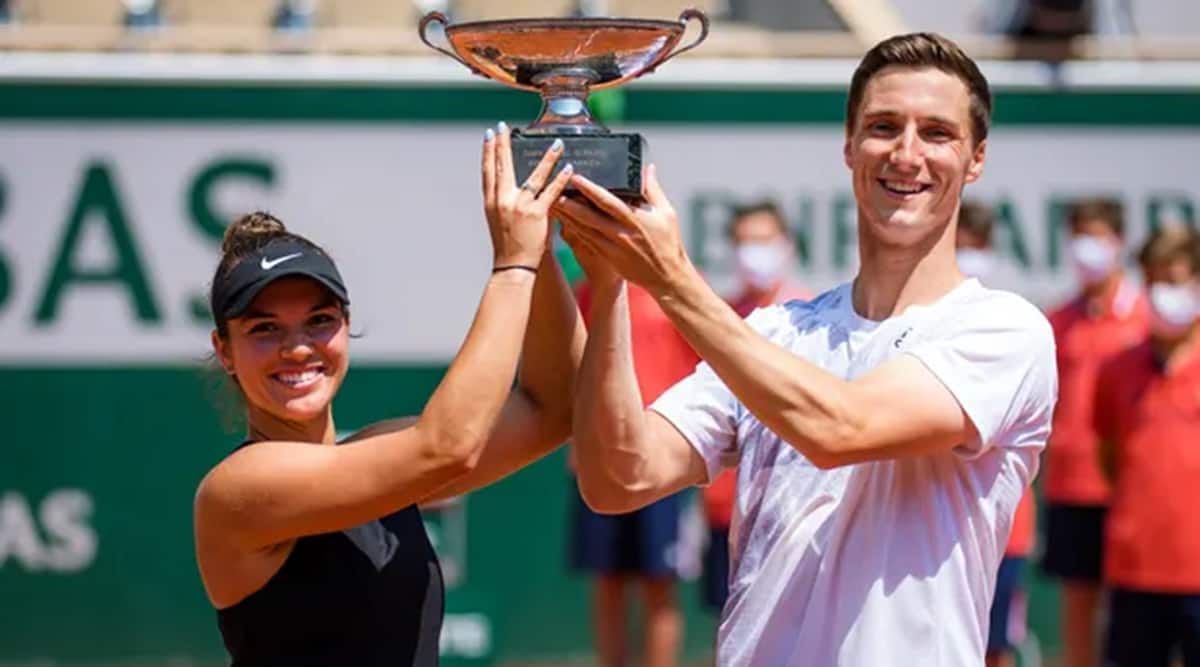 Streaker lit up after crashing 13th hole at Torrey Pines,…

Joe Salisbury ended Britain’s 39-year wait for a main draw title at the French Open when he combined with American Desirae Krawczyk to win the mixed doubles at Roland Garros on Thursday.

Krawczyk and Salisbury rallied from a set down to beat the Russian pair of Elena Vesnina and Aslan Karatsev 2-6 6-4 (10-5) to clinch the title on a sun-bathed Philippe Chatrier court.

The Russians looked in control and broke their opponents’ serve twice in the opening set to take the lead, before Krawczyk and Salisbury converted their only breakpoint opportunity late in the second set to take the match into a deciding tie-break.

They carried the momentum into the tie-break and opened up a 4-0 early lead, which was enough in the end.

“They killed us in the first set, and I think that it was a combination of sort of us getting better, then they dropped their level a bit,” said Salisbury, who has been playing mixed doubles with Krawczyk since the 2018 U.S. Open.

Britain’s last title at the claycourt Grand Slam had also come in mixed doubles when John Lloyd partnered with Australian Wendy Turnbull to win one of the five main draw titles in 1982.

Mixed doubles, which features only at the four Grand Slams and is not played on the professional tours, was not played last year at Roland Garros due to the COVID-19 pandemic.

The match could have taken a controversial turn when chair umpire Carlos Ramos ruled an ace from Salisbury to have landed out on 40-0 in the second set even as the team had taken their seats for the break before the match tie-break.

Salisbury argued that the umpire was mistaken about the mark where the ball landed but to no avail.

Salisbury ended up with a double fault on that point, then lost a second point on serve before finally managing to level the match on the third set point.

Salisbury said he had to compose himself following the argument. “That was a strange one … I’m not sure how he thought that that was the mark,” he told reporters.

“And especially after we kind of thought it was an ace, we sat down, thought we’d won the set, had to get up again.”

Denial of responsibility! My droll is an automatic aggregator of the all world’s media. In each content, the hyperlink to the primary source is specified. All trademarks belong to their rightful owners, all materials to their authors. If you are the owner of the content and do not want us to publish your materials, please contact us by email – [email protected]. The content will be deleted within 24 hours.
desirae krawczykFrench Openfrench open mixed doublesJoe SalisburykrawczykRoland GarrossalisburyTennis News
0
Share

Windows 11: Everything We Know About the Big Update