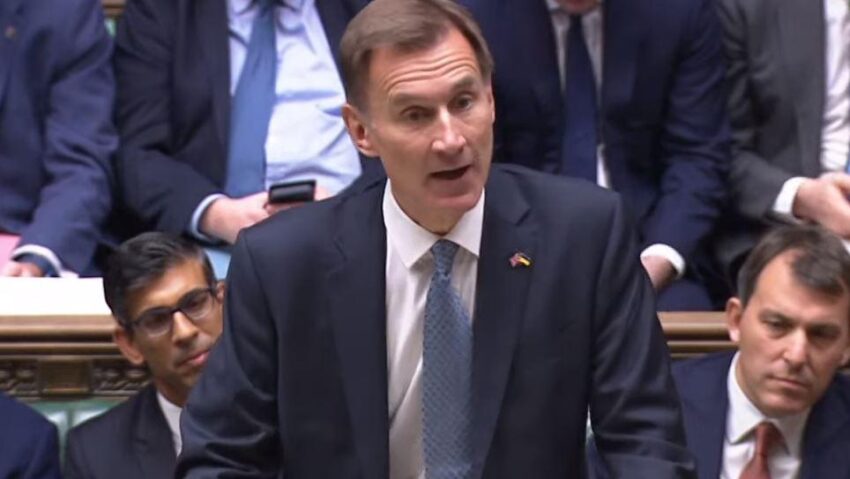 Jeremy Hunt has said he wants “those who have more to contribute more” as he unveils plans for all Britons to pay more tax.

The allowances and thresholds for income tax, national insurance and inheritance tax will be frozen until April 2028, two years longer than previously planned. This means that many more Britons will be dragged across thresholds into paying more of these taxes because of the effects of inflation.

Hunt insisted that despite the freezes Britain would “still have the most generous set of tax-free allowances of any G7 country”.

The chancellor said that from 2025, electric cars would no longer be exempt from paying vehicle excise duty.

Hunt extended the windfall tax on energy firms, which he said would raise an extra £14 billion. From the start of next year to March 28, the energy profits levy will increase from 25 per cent to 35 per cent. There will also be a new 45 per cent levy on electricity generators.

Hunt said he had “no objection to windfall taxes if they are genuinely about windfall profits caused by unexpected increases in energy prices. Any such tax should be temporary, not deter investment and recognise the cyclical nature of energy businesses.”

Qdos CEO, Seb Maley, commented: “The self-employed have been buried in bad news recently and this Budget doesn’t help matters. The Chancellor speaks about stability and growth, but has abandoned the self-employed, who are critical to ensuring both. Slashing the dividend tax threshold adds insult to injury.

“The government works on the basis that small businesses have pockets as deep as big businesses, and can absorb these freezes and tax hikes. The reality is, many can’t.

“The past few months have been a rollercoaster for contractors, in particular, who were led to believe that IR35 reform was to be repealed – only for the government to cruelly break this promise weeks later.

“At the very least, the government must address the fundamental flaws which continue to plague the IR35 rules and see thousands of contractors forced into zero rights employment. If the Chancellor thinks he’s put the issue of IR35 to bed, he’s mistaken. After backtracking on the IR35 reform repeal, calls for a review are likely to grow louder.”

Hadyn Rogan, Partner and tax law specialist at Weightmans LLP, said: “Following the September ‘mini budget’ it came as no surprise that the Chancellor would need to look to increasing taxes and trimming allowances wherever possible to help provide some stability.

“The cut in tax free dividend allowance from £2,000 to £1,000 was one such example of this. However, this will likely disproportionately impact small businesses and could have a potentially harmful impact on the economy, as the cut in the allowance combined with the earlier corporation tax increase will significantly increase the tax burden on many businesses.

“Although money needs to be recouped, these changes could potentially see longer-term damage with many small businesses unlikely to be able to absorb these additional costs together with rising energy costs through the winter and it is to be hoped that other support – in the form of grants for example – will be provided instead.”

Joanne Thorne, Technical Compliance Manager at SJD Accountancy said: “Spending cuts and tax hikes are a simple way for the Chancellor to start to plug the gap in the UK’s finances, but it will be the self-employed who feel the pinch of these most acutely.

“The cutting of the Capital Gains Tax threshold, which is the tax paid on any profit gained when selling an investment asset, such as a property or shares, offers a quick fix to raise money for government coffers.

“Halving the tax-free allowance from £12,300 to around £6,000 in 2023 and to £3,000 by 2024 could impact individuals across the board. However, this move is another blow to Limited Company Directors who may have built this tax efficiency into their company exit strategies. Many may now be forced to reconsider any exit strategy they had previously put in place.

“With confirmation that the Chancellor is also cutting the £2,000 tax-free dividend allowance to £1,000 by next year and halving it again to £500 by April 2024, alongside existing increases to both the dividend tax rates (by 1.25 per cent), and Corporation Tax from next year make today’s statement a triple whammy for Limited Company contractors.

“It’s disappointing that the contracting community continues to battle for financial security after a difficult few years, and government policies seem to overlook the valuable role they play in the UK economy.

“The Chancellor described this as a ‘balanced plan for stability’ but what we have seen today with these policy changes is a combination of squeezing and freezing. There is no doubt that tax planning in the years ahead for every self-employed individual will be absolutely essential.”

Giles Coghlan, Chief Market Analyst, HYCM, added their comments saying: “With tax hikes and spending cuts leading the agenda, today’s budget marks a stark return to austerity to an extent not seen since the aftermath of the 2008 global financial crisis. To calm the markets, the overarching sentiment of Chancellor Jeremy Hunt’s statement was that the UK now intends to live within its means, without stifling growth.

“Ultimately, there were few surprises – a strict, ‘kitchen sink’ budget had already been priced into the GBP, and bond markets tend to like austerity because it is disinflationary. This is why UK Chancellor Hunt said that the statement delivers a consolidation of £55bn, meaning that inflation and rates end up significantly lower. However, as the statement was released, expectations for next year’s interest rates remained around the 4.5% mark, albeit fractionally lower than prior to the statement.

“As Hunt ushers out the era of Trussonomics, which tried to stimulate the economy too quickly, there is an equal and opposite risk that the Chancellor depresses the economy too quickly, which could cause yet more economic and political upheaval. Hunt tried to deliver a statement that avoids both extremes. On balance, this was as good as it could have been. The GBP sold off initially on the OBR’s projections for GDP to not return to growth until 2024, but the reaction was marginal. The GBP is most likely to be pushed and pulled around now on the latest USD news, as the UK budget was fully priced into the market and pretty much as expected. The UK Chancellor will likely be breathing a sigh of relief now.”

Jatin Ondhia, CEO of Shojin, said: “Sunak and Hunt have been caught between a rock and a hard place. The pressure of plugging a £55bn fiscal hole has led to a Dickensian Autumn Statement, which left little room for any rabbits to be pulled out of the hat. While the main focus of these austerity measures is to attempt to patch up the country’s finances without rattling the markets, the giant elephant in the room is that the housing crisis is deepening.

“The affordability, quality and volume of homes is worsening for residents, as the upwards pressure on rent is being exacerbated by rising demand and a dwindling supply of homes. This is a national issue and one that can only be solved by taking decisive action to support housing development and boost the delivery of new homes. With housing representing the highest living cost for most, we cannot afford for this ongoing crisis to be once again swept under the carpet in the face of mounting fiscal pressures.”