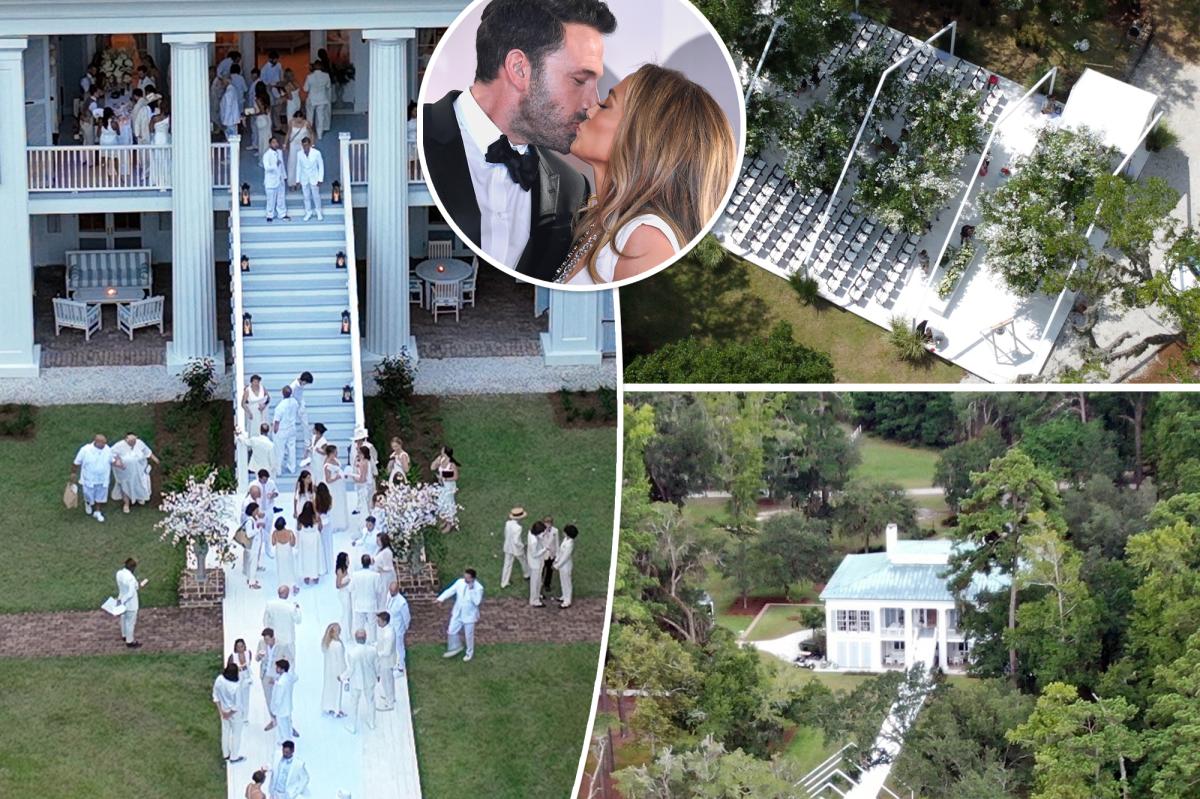 Jennifer Lopez and Ben Affleck tied the knot again — this time in front of A-list friends and family — at the actor’s 87-acre property in Georgia on Saturday evening after eloping in July, a source tells Page Six.

Page Six reported that the couple would be tying the knot for the second time in a much grander way at the Riceboro estate following their surprise Las Vegas wedding on July 16.

The singer confirmed their quickie wedding in her “On The JLo” newsletter to fans, writing, “We did it. Love is beautiful. Love is kind. And it turns out love is patient. Twenty years patient,” referencing their first engagement in the early aughts.

The Bronx native detailed how their Vegas wedding came together, saying they stood in line with four other couples also tying the knot.

“We barely made it to the little white wedding chapel by midnight,” she wrote. “They graciously stayed open late a few minutes, let us take pictures in a pink Cadillac convertible, evidently once used by the king himself (but if we wanted Elvis himself to show, that cost extra and he was in bed).”

The duo was then spotted honeymooning in Paris where they enjoyed plenty of PDA.

A source previously told us Lopez and Affleck’s wedding festivities would be a multi-day affair. And as Page Six exclusively reported, their wedding was being planned by Colin Cowie.

J.Lo and Affleck got engaged for the second time in April with the “Argo” actor presenting Lopez with an 8.5-carat green diamond ring estimated to be worth up to $10 million.

The pair rekindled their romance in April 2021 shortly after she broke things off with fiancé Alex Rodriguez amid rumors he had cheated on her.

She and Affleck first started dating in 2002, with the public dubbing them “Bennifer,” and were quickly engaged. But they called things off two years later due to the media hysteria surrounding their relationship.

Lopez went on to marry singer Marc Anthony in June of the same year. She and Anthony share 14-year-old twins Max and Emme.

Affleck, for his part, married Jennifer Garner in 2005 and they welcomed three children: daughters Violet and Seraphina, and son Samuel.

Both marriages ended in divorce and they both had high-profile relationships before reuniting as a couple. Lopez was engaged to A-Rod while Affleck dated “Knives Out” star Ana De Armas until they split in January 2021.

Prior to their wedding, Affleck and J.Lo clearly knew things were getting serious as they purchased a $50M on a Bel Air mansion together in March.

Denial of responsibility! My droll is an automatic aggregator of the all world’s media. In each content, the hyperlink to the primary source is specified. All trademarks belong to their rightful owners, all materials to their authors. If you are the owner of the content and do not want us to publish your materials, please contact us by email – [email protected]. The content will be deleted within 24 hours.
ben affleckcelebrity couplescelebrity weddingsgeorgiaJennifer Lopez
0
Share

Bangladesh Women vs Thailand Women Match Prediction Who Will…

Why Fund Plant-Based School Meals? A Teen Tells Us

Sofia, the Historic Airplane-Borne Telescope, Lands for the…