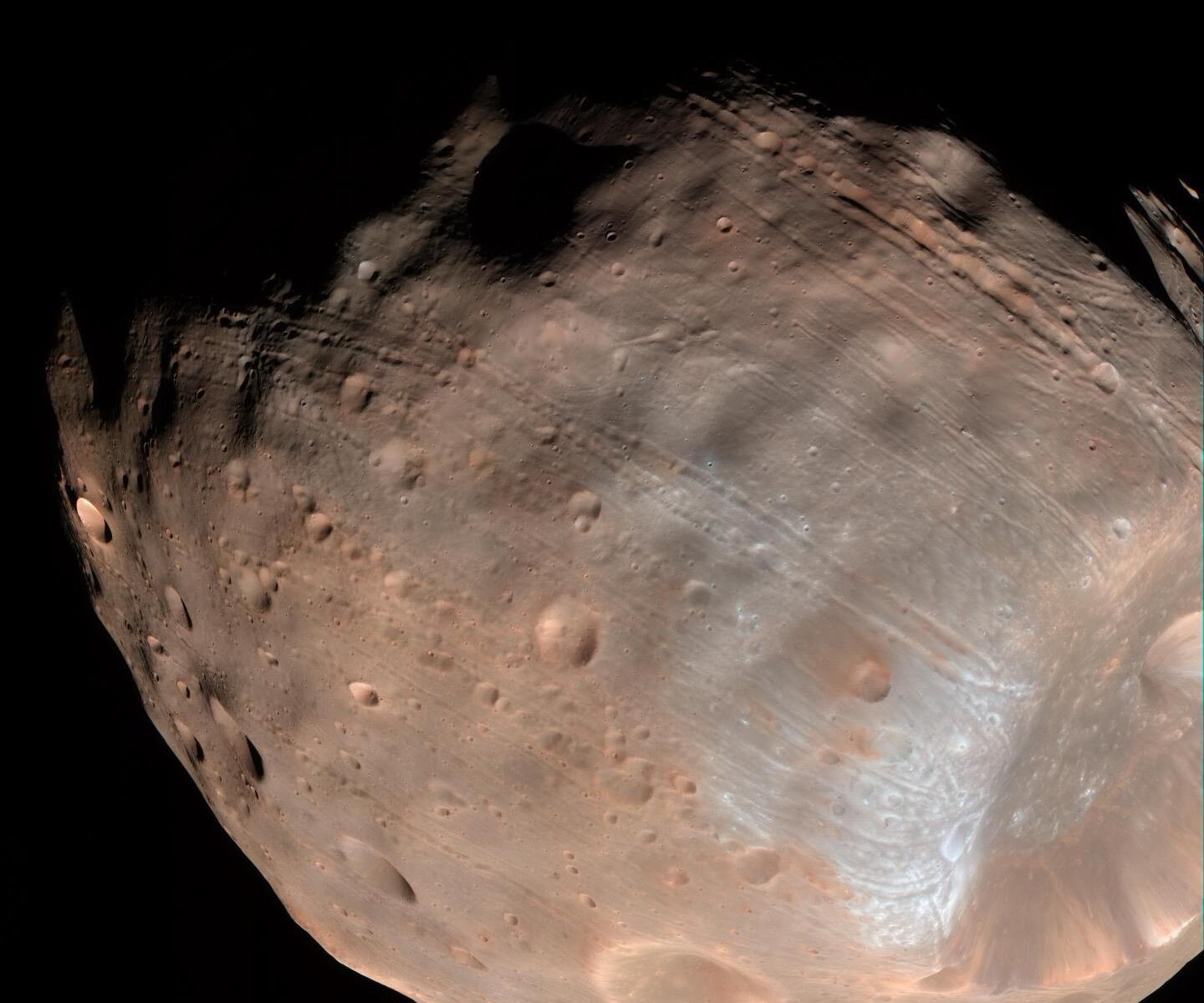 In 2024, the Japanese Aerospace Exploration Agency (JAXA) plans to launch the Martian Moons eXploration (MMX) mission to Phobos and Deimos. Deimos will get the fly-by treatment, but JAXA has more ambitious ideas for Phobos. They intend to land a spacecraft on Phobos—maybe twice—and collect samples for return to Earth. (JAXA has a track record of gathering samples from elsewhere, so don’t bet against them.)

The German Aerospace Center (DLR) will send a rover on the mission. The rover is called the MMX Rover, a small 25 kg (55 lb) wheeled vehicle that will be “dropped” on the surface of Phobos from a height of about 50 meters.

“With the MMX rover, we are breaking new ground in terms of technology because never before has an exploration vehicle with wheels traveled on a small celestial body with only one-thousandth of the Earth’s gravitational pull,” said Dr. Markus Grebenstein from the DLR Institute of Robotics and Mechatronics in Oberpfaffenhofen.

Getting the rover onto Phobos’ surface is not an ordinary landing procedure. The little vehicle will be dropped onto the moon and tumble as it falls. When it reaches the surface, it’ll need to right itself and get to work.

“As the rover free-falls onto Phobos following separation from the spacecraft, it will perform several ‘somersaults’ upon touchdown without damage and come to rest in an unpredictable position. From this situation, it must autonomously upright itself with the help of the propulsion system and unfold its solar panels,” said Grebenstein, DLR’s project manager for the MMX rover. “Finally, it will travel very carefully at only a few millimeters per second in order to retain contact with the ground with its special wheels despite the low gravity.”

Once there, it’ll use its instruments: a radiometer and a Raman spectrometer for in-situ measurements of the moon’s surface. Why those two?

It’s because of the questions around Phobos and its sibling, Deimos. Scientists aren’t sure if they’re captured asteroids from the main belt or elsewhere in the Solar System—possibly from as far away as the Kuiper Belt—or if they’re rubble pile asteroids that formed at Mars. Some evidence shows that they’re being torn apart by Mars’ gravity. They may even have been destroyed once already and reformed again, or they may be the result of an impact that sent Martian material into orbit, where it coalesced.

The rover’s radiometer will measure the power of the moon’s electromagnetic radiation. It’ll be tuned to the infrared spectrum and effectively measure Phobos’ temperature. That helps lead to an understanding of the moon’s porosity, which scientists can compare to other Solar System bodies. Scientists can use that data to help understand the moon’s origins.

The rover will also have four cameras: two are for navigation, and two will monitor the wheels on the ground.

The mission’s crowning achievement will be the sample return. JAXA intends to outdo its impressive sampling achievement from the Hayabusa 2 mission. That mission returned samples of asteroid Ryugu that are carbon-rich fragments. They’ll help determine the source of water and organic molecules delivered to Earth.

With MMX, JAXA hopes to collect a much larger sample than the Ryugu sample, up to 100 times larger. Because of conditions on Phobos, the mission only has 90 minutes to collect samples before darkness returns, and the spacecraft needs to leave the surface. If all goes well, the sample will be back on Earth in 2029.

Those restraints won’t affect the rover. It’ll take its measurements and then die on Phobos, but first, it’ll contribute to the sampling operation. The MMX Rover will reach the surface first and help determine the landing spot for the Exploration Module. Data and images from the rover will also serve as a reference for the orbiter’s instruments.

There are layers of international cooperation on this mission. The MMX mission is Japan’s project, and the DLR will supply the rover. But Spain is helping develop the Raman spectrometer, and the French space agency is involved in the project, too.

So when the mission hopefully lands on Phobos and succeeds in collecting samples, there’ll be teams of jubilant scientists and engineers in several countries.

Citation:
JAXA’s ambitious mission to Phobos will even have European-built rover (2022, November 18)
retrieved 19 November 2022
from https://phys.org/news/2022-11-jaxa-ambitious-mission-phobos-european-built.html

NASA Will Not Change the James Webb Telescope’s Name