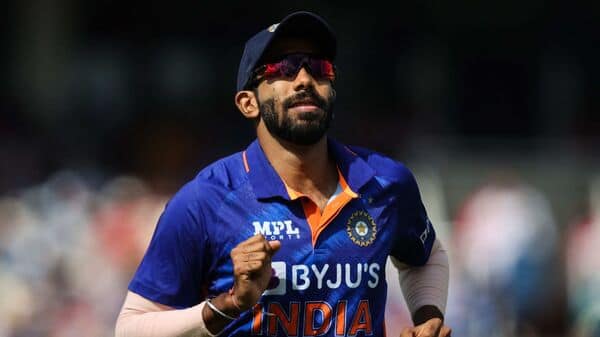 Jasprit Bumrah has been ruled out of the T20 World Cup which will take place in Australia this year. The BCCI medical team has ruled out Team India fast bowler Jasprit Bumrah from the ICC Men’s T20 World Cup squad. The decision was taken following a detailed assessment and in consultation with the specialists.

Jasprit Bumrah, was initially ruled out from the ongoing Mastercard 3-match T20I series against South Africa due to a back injury. The BCCI will be naming a replacement for Jasprit Bumrah in the squad for the T20 World Cup soon.

Bumrah had “sustained” a back injury and was being monitored by their medical team at the NCA. While the BCCI will be naming a replacement for Bumrah in the squad for the marquee tournament soon, one among Mohammed Shami and Deepak Chahar will make it to the main squad. Jammu and Kashmir pacer Umran Malik is expected to be named in the stand by list.

Bumrah has had a history of back problem due to his slinging unorthodox front-on action which puts a lot of load on his back. He was ruled out for three months in 2019 also with a minor stress fracture but this time, it could well be a case of at least four to six months of no show.

Jasprit Bumrah missed the opening match against South Africa and is under medical supervision for a stress fracture of the back.

India begin their World Cup campaign in three weeks and Bumrah’s absence would be a blow to their prospects of winning the showpiece event.

Bumrah played two T20 internationals against Australia recently but was not at his best, having already spent time on the sidelines.

India have missed Bumrah’s death-bowling expertise. He has played 30 Tests, 72 ODIs and 60 T20Is for India since making his international debut in January 2016.

Denial of responsibility! My droll is an automatic aggregator of the all world’s media. In each content, the hyperlink to the primary source is specified. All trademarks belong to their rightful owners, all materials to their authors. If you are the owner of the content and do not want us to publish your materials, please contact us by email – [email protected]. The content will be deleted within 24 hours.
BCCIJasprit BumrahMen’s T20 World Cup 2022t20 world cupT20 World Cup in AustraliaTeam India
0
Share