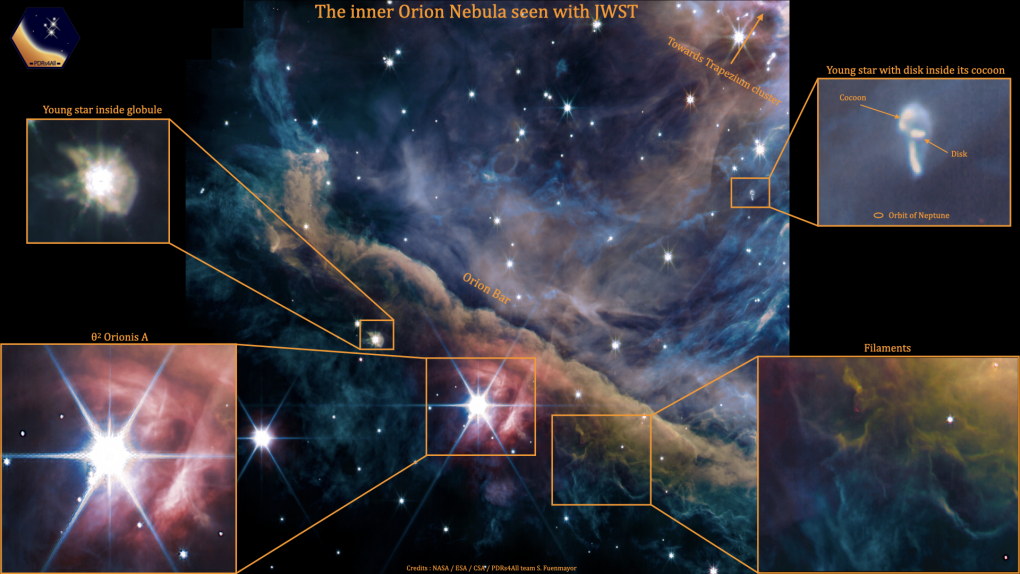 The James Webb Space Telescope (Webb) has captured spectacular images of a stellar nursery in the heart of the Orion Nebula, and the project has a very special connection to London, Ont.’s Western University.

According to a press release from Western University, Webb captured the sharpest images yet of the Orion Nebula, a stellar nursery located in the constellation of Orion, located 1,350 light years from Earth.

The images were released on Monday as part of the Early Release Science program PDRs4All — an international collaboration involving more than 100 scientists in 18 countries. The project is spearheaded in part by CNRS research scientist Olivier Berné and Institut d’Astrophysique Spatiale (IAS) associate professor Emilie Habart.

Also included in this partnership are astrophysicists from Western University.

“These new observations allow us to better understand how massive stars transform the gas and dust cloud in which they are born,” said Peeters, a Western astronomy professor and faculty member at the Institute for Earth and Space Exploration in the release.

The photos reveal the inside of a cocoon containing young stars surrounded by a disk of dust and gas, from which planets form — a particular interest to scientists today.

Our own solar system is 4.5 billion years old, so observations such as that of the Orion Nebula can give scientists insight into what the first million years of planetary evolution looked like.

A young star with disk inside its cocoon is seen in this image captured by the James Webb Space Telescope and released on September 12, 2022. Planet forming disks of gas and dust are seen around a young star, and these disks are being dissipated due to the strong radiation field of the nearby stars, creating a cocoon of dust and gas around them. Almost 180 of these externally illuminated disks around young stars have been discovered in the Orion Nebula, and HST-10 (the one in the picture) is one of the largest known. The orbit of Neptune is shown for comparison. (Source: Western University)

“We clearly see several dense filaments,” added Berné. “These filamentary structures may promote a new generation of stars in the deeper regions of the cloud of dust and gas. Stellar systems already in formation show up as well.”

Photographing the interiors of stellar nurseries such as the Orion Nebula in visible light with Webb’s predecessor the Hubble Space Telescope is normally impossible due to the obstruction of stellar dust and gas.

Because Webb captures images in infrared, scientists can peer through layers of cosmic gas and dust and into the heart of these stellar structures, normally hidden away in visible light.

“We are blown away by the breathtaking images of the Orion Nebula. We started this project in 2017, so we have been waiting more than five years to get these observations,” said Peeters.

Webb is the most powerful space telescope ever built. The telescope was in development for 20 years and officially launched into outer space in December 2021.

The telescope was developed in tandem by NASA, the European Space Agency and the Canadian Space Agency (CSA). As a partner, the CSA receives a share of Webb’s observation time, allowing some Canadian scientists to be the first to study data collected by the most powerful telescope ever constructed.

“Seeing these first images of the Orion Nebula only marks the beginning of our excitement. The PDRs4All team is working hard to analyze the Orion data and we expect new discoveries about these early phases of the formation of stellar systems,” said Habart. “We are excited to be part of Webb’s journey of discoveries.”

Prince Harry speaks out after Queen Elizabeth II’s death: “I am forever grateful”