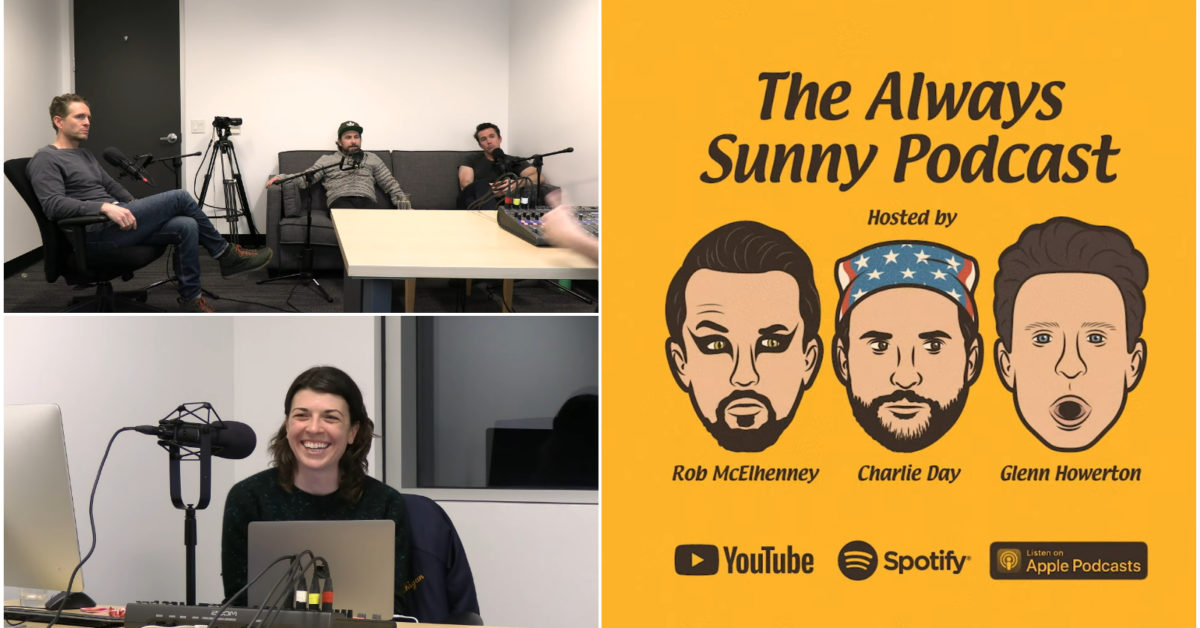 Early last week, fans of FXX’s Rob McElhenney, Charlie Day, Glenn Howerton, Kaitlin Olson & Danny DeVito -starring It’s Always Sunny in Philadelphia were hit with the news that they had been waiting to hear. That’s when McElhenney took to Instagram to let us know that writing was underway on the 16th season of the record-setting sitcom. Now, thanks to this week’s edition of The Always Sunny Podcast (covering S05E01 “The Gang Exploits the Mortgage Crisis”), McElhenney, Day, Howerton & Megan Ganz offered updates on how things are going. And from the sound of it, things are moving pretty quickly…

To kick things off, McElhenney reveals that they’re recording the episode from the writers’ rooms for the new season. With Howerton sharing that they are “in the thick of it” & Day adding “we are under the gun,” we learned that filming on the season is set to kick off in about 16 days (10 work days, depending on how you look at it). Once the podcast episode officially starts, Day stresses again that they “have a lot of work to do” and probably shouldn’t be recording, but it actually serves as a bit of a break. From there, Ganz offers some great perspectives on the writing process for the upcoming season and how it connects to the episode they were about to cover.

And here’s a look at this week’s episode of The Always Sunny Podcast, with updates on the 16th season kicking in at the top of the episode (followed by a look back at McElhenney’s initial heads-up about the new season):

Thanks to an Instagram Stories video posted last week by McElhenney, with Day making a quick appearance, it was first confirmed that writing on the 16th season was underway:

In the following puppy-fueled Buzzfeed Celeb interview, McElhenney and Ryan Reynolds (Deadpool, Free Guy) answered questions while surrounded by the joy of puppies (who apparently have very full bladders) while promoting their docuseries, Welcome to Wrexham. At one point, Reynolds is asked if he would ever appear on FXX’s long-running (and record-setting) comedy. Saying he was “personally offended that I was never asked,” Reynolds offered a “Hell, yes” and reminded McElhenney that they discussed him making a cameo in the past. Answering that “it can be arranged,” McElhenney came up with what could be the best role possible: “Mac needs a boyfriend,” before looking directly at Reynolds… with a “Great!” from Reynolds in response (beginning at 3:20 mark). Along with the puppy-playing (thanks, Petco) and the “Always Sunny” talk, the duo also discuss their favorite memories while filming Welcome To Wrexham, if there is a possible Ted Lasso cameo in their futures, and anything that Reynolds can say about Deadpool 3: