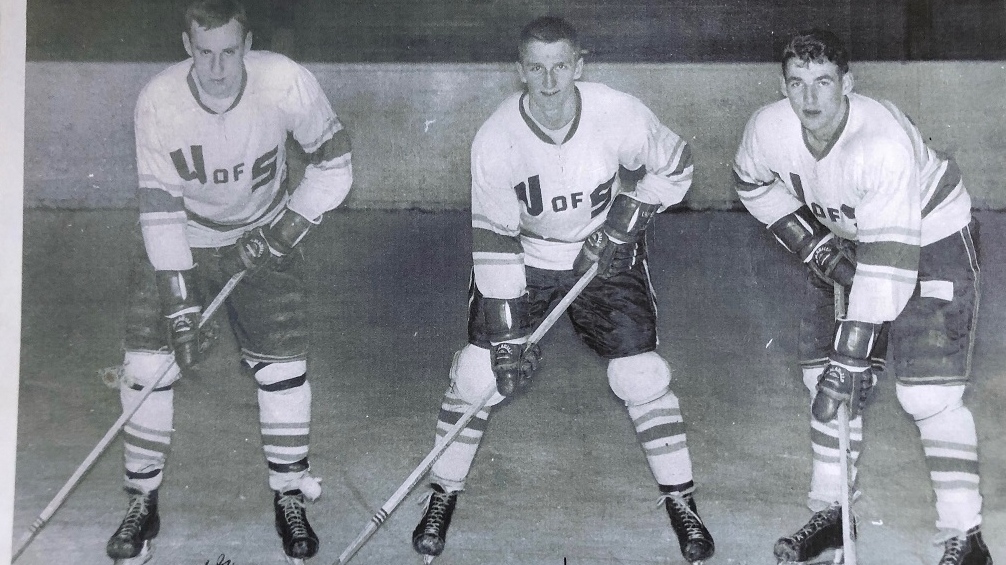 A piece of hockey history in Saskatoon is coming down after more than 90 years of existence.

Demolition of the storied Rutherford Rink at the University of Saskatchewan is underway.

Built in 1929 with a price tag of $47,000, it was the last major project before the Great Depression, and a centrepiece of campus activity until the final game in 2018.

Former Huskie (1964-1968) Wally Kozak says that for a kid from small town Saskatchewan who became the captain, playing at Rutherford Rink was a dream come true.

“It was like going to paradise to play university hockey,” said Kozak, a member of the Alberta Hockey Hall of Fame.

One of three small town first-year students that made the Huskies, Kozak is pictured in the middle.

“It was very good hockey at the time. They didn’t have major junior, but the Saskatchewan Junior Hockey League was a pretty elite league, and all the graduates were players from that league. So to make that roster was a pretty good achievement.”

While the rink was known for its shortcomings at the end of its existence, like rust delays when a puck hit the rafters, or a women’s team dressing room that was essentially a trailer attached to the building, Kozak says it was more than enough for his Huskies team in the late 1960s.

“By all standards of the time, it was a good arena,” said Kozak, who grew up in nearby Wadena. “It met our needs, but there were things that stood out that were quite inadequate that I remember very well.”

In his day, Rutherford Rink was just over 30 years old. Kozak remembers some of those shortcomings with a smile, most notably the lighting.

“The lighting was so bad, in between periods we would shut the lights off,” Kozak told CTV News. “That way, when we did go back on the ice, it seemed like the lights were bright.”

Kozak and his Huskies made it to the national championship in 1966, but one story about school spirit sticks out in his mind more than 50 years later.

“A group of law students who called themselves the College Nine, they were a very good jazz type band,” said Kozak. “They had musical instruments, and they would interrupt the play. They would walk right onto the ice, march and play their music. In the middle of a game.”

It was a tradition that Kozak thinks helped draw crowds to the rink on game nights.

“I believe a lot of students came to the game just to see the band when it would appear and march around on the ice,” said Kozak, who recently had a rink named after himself in Calgary in recognition for his contribution to the game of hockey.

For all the quirks that came with the Rutherford Rink, Kozak says there’s a special bond shared between anyone who has been inside it.

Whether it was the twizzlers and “coffee” at the concession, the pillars blocking your view, or the cold draft blowing in through the cracks in the doors, everyone can remember something about the old rink in detail.