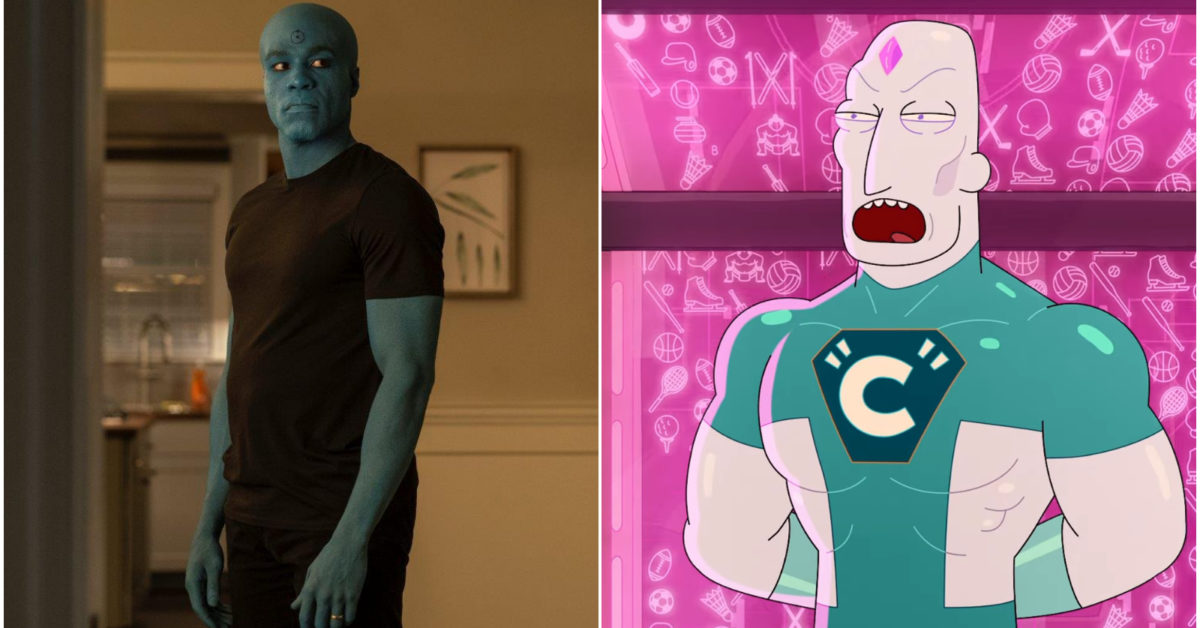 Before we fully shift our focus to this weekend’s new episode of Dan Harmon and Justin Roiland‘s Rick and Morty, there’s something that’s been gnawing at the back of our brains since our review of “Full Meta Jackrick” went live. At one point in the episode that would make our eyes bleed if we attempted to summarize it in one article, Rick and Morty have to take on the Self-Referential Six in their fortress in the Meta Layer to get to a prisoner who can help them back get back to their reality. That means facing off with Miss Lead, Flash Back, Connie TinuityError, Protago Nick, and Mr. Twist (with the “twist” being that there is no sixth member).

After a series of back-and-forth battles, our dimension-hopping duo ends up next to the cell of the prisoner Brett Caan, who can retcon the very fabric of reality itself. So much so that when Morty points out that “Rhett Caan” would make more sense as a name, Rhett Caan makes it so that it has always been that way (and even got us to start calling him that). From there, Rhett Caan went on a reality-twisting run that reminded us of something, but it took another watch to figure it out. Either on purpose or by some fascinating coincidence that would even be more fascinating, Rhett Caan felt like we were seeing the show’s version of Dr. Manhattan from Watchmen (HBO or comic book versions, doesn’t matter).

I mean, it’s not that big of a reach. Visually, he has a general build/shape similarity, with a diamond instead of a hydrogen atom symbol. And while this may be a reach (it is), the “C” on Rhett Caan’s got me thinking of Charlton Comics, whose characters would inspire Watchmen co-creator, Alan Moore. And then there’s the matching power set, though we don’t quite remember Dr. Manhattan taking such visual glee in mowing down the Seventh Kavalry as Rhett Caan does when retconning weaknesses into the Self-Referential Six to pick them all off one by one.

And then Rhett decides that instead of world-building, he would rather engage in a little world-changing by turning the fortress into an orange… and then, seemingly disappearing (but not before losing a serious game of bluff with Joseph Campbell). But we’re left to wonder if Rhett Caan is only all-powerful in the Meta Layer or if, like Story Lord, he has the potential to reach into Rick and Morty’s reality. Because if that’s the case and his powers travel with him, we could have a Dr. Manhattan-level threat on our hands. How does Rick take on a god that could retcon him back to a happier past?

And in the following promo for S06E08 “Analyze Piss,” Cookie Magneto looks to take on our dimension-hopping duo. One problem for Cookie Magneto, though? Rick’s really stopped having time for all the s**t he’s been getting from “wacky characters,” as you’re about to see. Something tells me this might be Dr. Wong’s (Susan Sarandon) episode:

Vita3K Emulation Gets God Of War At 30fps On Android

Mercedes-Benz EQG will be built in Austria alongside the…

Hallmark Fans Are Declaring Lacey Chabert the New “Queen of…

Want Whiter Teeth in 2023? Oral-B and Colgate Products Are…