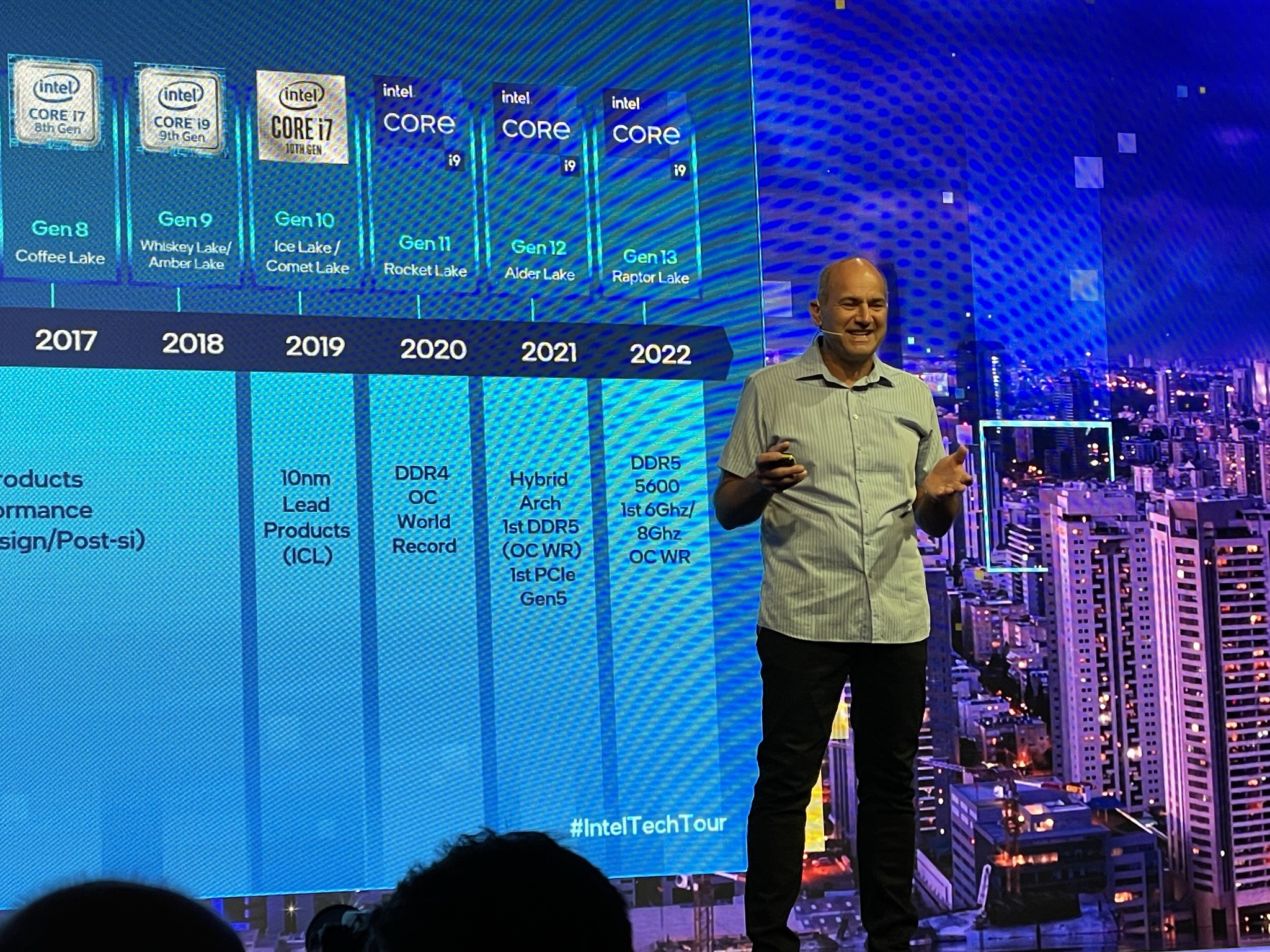 Intel shared some teasers about the upcoming Raptor Lake platform, and if this doesn’t get you hyped, we don’t know what will.

According to Intel, the new processors will be capable of hitting 6GHz clock speeds at stock settings — but that’s not all. Intel also teased that the CPU has set an overclocking record, surpassing the 8GHz barrier. In addition, we now know the performance Intel expects to deliver with Raptor Lake, and the jump from Alder Lake looks to be quite huge.

All of the information comes from Intel Tech Tour in Israel. We’re likely to hear more in the next couple of weeks, but even the things we already know are pretty exciting. We’ve learned more about Intel Raptor Lake and what to expect from the lineup. Let’s dive in.

For starters, Intel stated that Raptor Lake wouldn’t exist if not for the fact that Meteor Lake CPUs were not going to be ready on time. The development of these 13th-gen processors started roughly two years ago, and because the platform is so similar to Alder Lake, Intel was able to complete the process quickly. Despite the similarities, Raptor Lake is said to deliver a marked jump in performance.

Intel expects Raptor Lake to offer a 15% boost in single-threaded workloads and a massive 41% boost in multi-threaded operations, as well as an overall “40% performance scaling,” as noted by Tom’s Hardware. This is a smaller jump than was expected based on early benchmarks, but it’s still a big deal.

As for the clock speeds, it’s true — Intel has confirmed that there will be a Raptor Lake CPU that can hit 6GHz at stock settings. This implies a processor that’s even better than the upcoming flagship Core i9-13900K, which presumably means a Core i9-13900KS, the follow-up to this generation’s Core i9-12900KS.

Intel could certainly use a buffed-up Core i9-13900KS, especially if it arrives at a later date, which it most likely will. AMD will have a strong ace up its sleeve with the 3D V-Cache versions of Zen 4 coming out in 2023, so Intel may be able to match that performance with the rumored Core i9-13900KS. However, when it comes to the price, AMD might be more affordable if the current generation is anything to go by — Intel’s Core i9-12900KS was certainly not cheap.

Aside from the 6GHz stock speed, Intel has also teased a new record in overclocking achieved by Raptor Lake — the CPU has managed to hit 8GHz, which is an insane new high. Of course, liquid nitrogen cooling was a necessity here, so this is not a clock speed that most users will ever see on this platform. This isn’t a complete world record in overclocking — that belongs to the AMD FX-8370 that was pushed to a whopping 8.7GHz in 2020 — but it’s certainly a record for Intel’s 10nm platform.

We are likely to learn more about Intel Raptor Lake in the next couple of weeks. The processors are rumored to launch in October, following an official announcement from Intel on September 27 — the same day AMD launches its next-gen Ryzen 7000 processors.