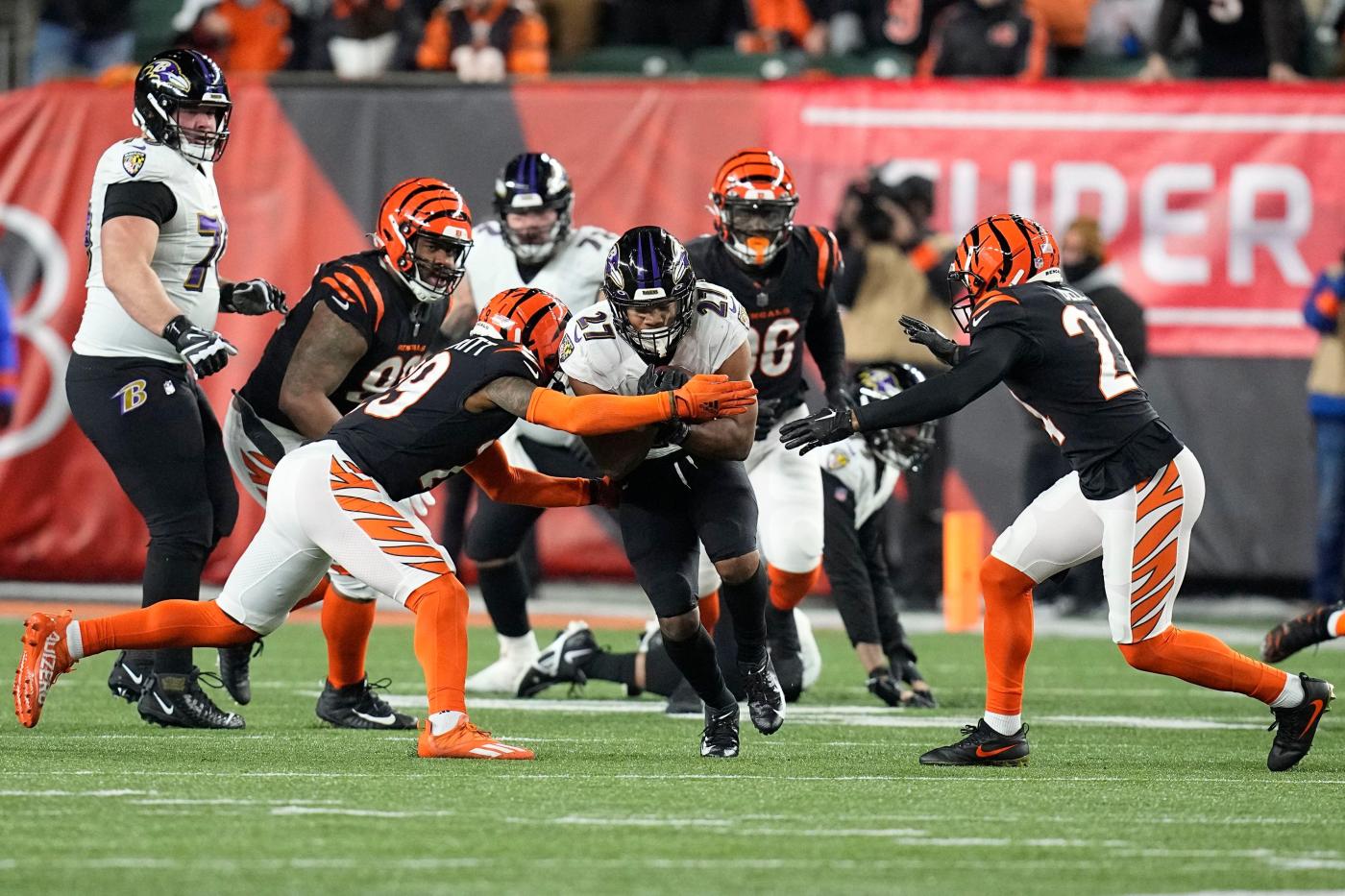 Here’s what the Baltimore Sun sports staff had to say immediately after the Ravens’ 24-17 loss to the Cincinnati Bengals in Sunday night’s AFC wild-card playoff game at Paycor Stadium.

Childs Walker, reporter: What a cruel twist for Tyler Huntley, who was playing the game of his life only to fumble away a potential victory at the goal line. The Ravens probably should have handed the ball to a running back on that fateful third down, but it’s Huntley who will feel the agony. The Ravens did not play like a team that expected to lose. They immediately went against their narrow formula for victory when Huntley threw an interception on his second attempt of the game. The Bengals punished his carelessness with a touchdown drive to go up two scores. But the Ravens answered with a 75-yard touchdown drive of their own and evened the turnover battle when Kyle Hamilton knocked the ball out of Hayden Hurst’s grasp with a fierce hit. The Ravens could not have asked for a better scenario at halftime, up one with the ball coming back to them to start the third quarter. They kept taking the fight to the Bengals in the second half, answering a touchdown drive with one of their own and moving within one yard of taking a 24-17 lead before Huntley’s fumble and Sam Hubbard’s 98-yard touchdown return. The Ravens outplayed and outhit the favored Bengals for much of the night, but that will be cold comfort as they begin a long offseason, with Lamar Jackson’s uncertain future in Baltimore likely to be one of the NFL’s top stories for months to come.

Hayes Gardner, reporter: The Ravens’ offense played its best game without Lamar Jackson. And the defense was strong enough to win, too. Ultimately, though, a catastrophic play doomed them.

C.J. Doon, editor: It’s rare for a road underdog to absorb such a gut-wrenching loss, especially in the postseason. The Ravens were mere inches away from taking the lead in the fourth quarter, only to watch Bengals defensive end Sam Hubbard rumble 98 yards for the longest fumble return touchdown in NFL postseason history. That botched sneak overshadows what was a gutsy performance for Ravens quarterback Tyler Huntley, who will be thinking about that stretch at the goal line for a long, long time. The Ravens won’t be interested in moral victories after such a disappointing end to the season, but stifling defense and a resurgent J.K. Dobbins provide some hope for the future, provided the offense can find some reliable receivers. (OK, that’s a big if.) At the end of the day, they were a few breaks away from pulling off a stunning upset. There will be plenty of time to discuss Lamar Jackson’s future this offseason. How this team changes, in regards to both players and coaches, will be fascinating.

Tim Schwartz, editor: They say football is a game of inches. This game proved it. Another foot of extension by Ravens quarterback Tyler Huntley could have changed the course of the franchise. It was a jaw-dropping play that — understandably — overshadowed what was the best performance of Huntley’s career. The Ravens battled and fought and clawed in a game many expected would be closer than the 8 1/2-point spread and had several opportunities after the fateful fumble to drive and tie the game but couldn’t get it done. That sounds like their season as a whole — so close, yet not quite good enough when it mattered most. Now, the most interesting offseason in Ravens history awaits with Lamar Jackson a pending free agent. Bring your popcorn.