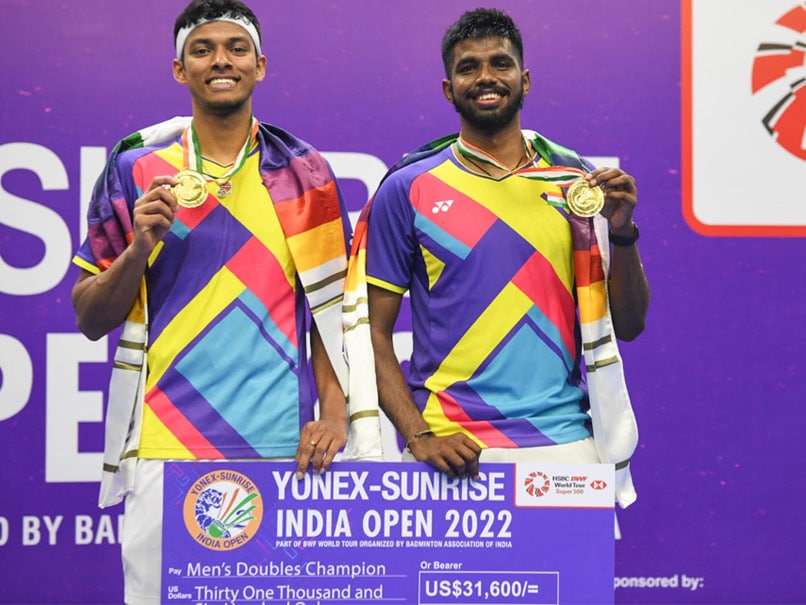 Satwiksairaj Rankireddy and Chirag Shetty on Sunday became the first team from country to win the Yonex-Sunrise India Open after toppling three-time world champions Mohammad Ahsan and Hendra Setiawan. The world number 10 Indian pair, which had won its first Super 500 tournament in Thailand in 2019, upset the top seeded Indonesian pair 21-16 26-24 in 43 minutes to make a rampaging start to the new season. Coming into the match with a 1-3 head-to-head record, Satwik and Chirag dished out a brave effort as they staved off a fightback to reign supreme in the final.

From almost missing the tournament following a false COVID positive result to winning the title, it turned out to be an incredible start to 2022 for the Indian pair, which accumulated valuable ranking points ahead of a busy season, which comprises some big-ticket events such as the Commonwealth Games and Asian Games.

The Indian pair started on a positive note and even through the Indonesian combination clawed back, Satwik and Chirag ensured they are two points ahead at the first interval.

The Indians tried to engage their rivals in rallies and led 18-13 but the Indonesians reduced the deficit to 16-18 before Satwik and Chirag prevailed in the opening game.

But the Indian pair again ensured they have the advantage at the break, grabbing a slender 11-10 lead. Sawtik and Chirag maintained the intensity in the rallies after the break to lead 15-13.

The world number two again drew parity at 17-17 but Satwik and Chirag moved to 19-17 when Ahsan erred at net. But Chirag went long next as it was 19-19. Indonesian managed to move to a game point with a tap by Ahsan.

What followed next was frequent exchange of points as both India and Indonesia earned and squandered their advantage positions in equal measure.

After a fierce battle, it was the Indian pair who showed better nerves to emerge victories with the Indonesia squandering five game points.

Satwik and Chirag had won the Thailand Open Super 500 title in 2019, besides reaching the finals at French Open Super 750 the same year.

The duo also claimed the silver medal at the Gold Coast Commonwealth Games, besides winning the Hyderabad Open Super 100 and finishing runners-up at Syed Modi International in 2018.

The Indian pair also had qualified for the Tokyo Olympics last year but couldn’t cross the group stage despite winning two out of three games.

Denial of responsibility! My droll is an automatic aggregator of the all world’s media. In each content, the hyperlink to the primary source is specified. All trademarks belong to their rightful owners, all materials to their authors. If you are the owner of the content and do not want us to publish your materials, please contact us by email – [email protected]. The content will be deleted within 24 hours.
badminton ndtv sports
0
Share

27 Best Daily Planners and Organizers for 2022

fpi selloff: After 8 months of relentless outflows, is FPI…