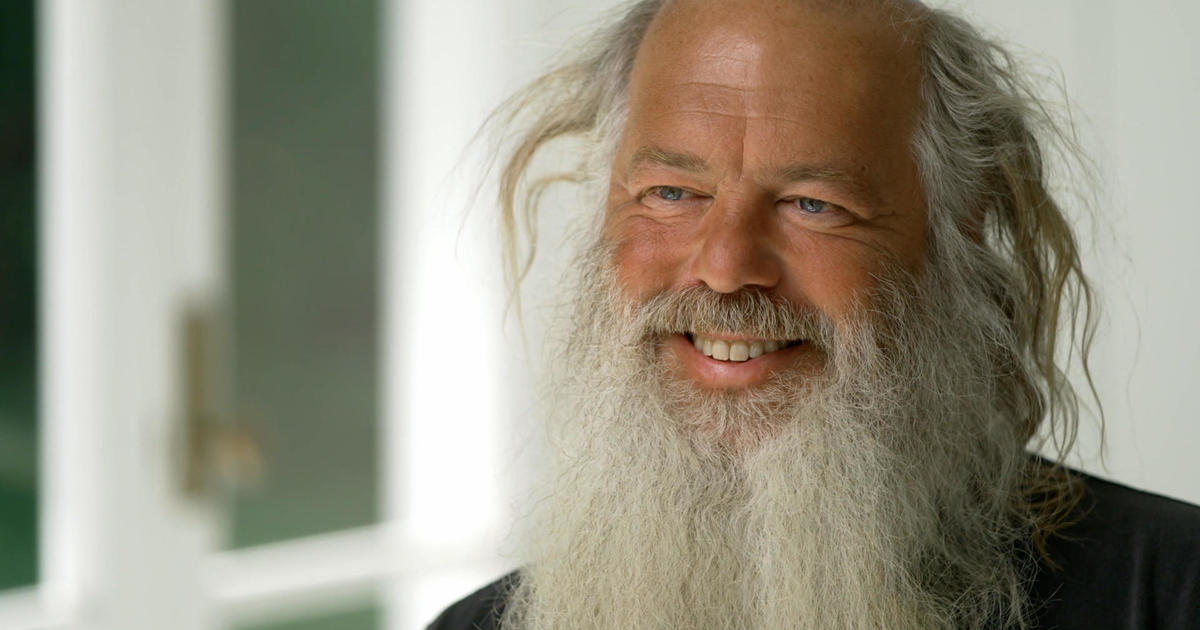 Rick Rubin is one of the most talented music producers of his generation and certainly one of the most interesting. At 59, he’s worked with just about every top recording artist across all genres. In an industry geared toward churning out hits, Rubin’s focus is on feelings and helping artists get in touch with their musical selves. If that sounds somewhat mystical, that’s just fine with Rick Rubin. After all, his storied studio in California is named Shangri-La and he’s been called the Guru by more than a few of the artists he’s worked with. In fact, before our interview even began, Rubin crossed his legs, closed his eyes, and then suggested we do the same.

Rick Rubin: Should we spend two minutes eyes closed meditating before we start?

Rick Rubin: Let’s do that.

Rick Rubin is definitely in tune with his creative force. Over the last four decades he’s produced albums and songs with more than 120 artists.

He’s helped launch careers – LL Cool J and Public Enemy among them. And he’s often the go-to guy for artists at the top of their game, like Adele.

But exactly what he does, and how, is difficult to describe.

Anderson Cooper: Do you play instruments?

Anderson Cooper: Do you know how to work a soundboard?

Rick Rubin: No. I have no technical ability. And I know nothing about music.

Anderson Cooper: (LAUGH) You must know something.

Anderson Cooper: So what are you being paid for?

Rick Rubin: The confidence that I have in my taste and my ability to express what I feel has proven helpful for artists.

Artists are eager to make the pilgrimage to Shangri-La Studios in Malibu to work with Rubin.

Anderson Cooper: How many studios do you have here?

The place is minimalist, to say the least. There’s no mirrors, no TV’s, no signs of Rick Rubin’s extraordinary success.

Anderson Cooper: I’d never been in a recording studio where there’s not gold records and Grammys. Do you have, like, a tiny ego room somewhere?

Rick Rubin: I don’t. I u– I used to send them all to my parents (LAUGH). And I don’t know where they are now. It’s a distraction. If you start thinking about doing something to achieve that, then you’re not focused on this- making this beautiful thing. It undermines the purity of the project.

Rubin has referred to himself as a reducer, instead of a producer.

Rick Rubin: I like the idea of getting the point across with the least amount of information possible.

Anderson Cooper: And that’s what you’re doing in a recording studio? You’re listening to music, to sound, and trying to strip it?

Rick Rubin: Just to see what’s- what is actually necessary. Getting it down to that essence to start with is really helpful in understanding what it is.

On our first day, he brought us in on a jam session with saxaphone great Kamasi Washington.

Anderson Cooper: What are you listening for? Like right now, there’s, what, chimes, piano.

Rick Rubin: Yeah. I’m not listening to any of those things. (LAUGH)

Anderson Cooper: (LAUGH) Okay. What are you listening to?

Anderson Cooper: How do you listen to a feeling?

Rick Rubin: Well, my body’s moving. I feel that melody awaken something in me. There’s something familiar about it, but I don’t think I’ve heard it before. The feeling of familiarity is a good feeling.

If you haven’t noticed by now Rick Rubin talks a lot about feelings.

Rick Rubin: My aim is not to have my presence felt (LAUGH). Unless it’s necessary, unless it’s helpful.

His presence is laid back, literally. He usually listens lying down and barefoot, with his eyes shut. You might think he was napping.

Rick Rubin: I try to listen as closely as I possibly can. And when my eyes are closed, I feel like I’m there with the music.

It may not seem like work, but Rubin hears things and senses things other producers don’t. Back in 1993, a few stray guitar chords on a Tom Petty demo tape caught his attention.

Rick Rubin: Tom sent me demos of about five new songs and none of them really struck me, honestly. None of them spoke to me. But that guitar riff that opens the song was something that was played between two of the songs. Just like a- (LAUGH) like a warm-up.

Rick Rubin: I drove to Tom’s house and I played it for him. And I said, “Listen to this piece. I feel like this is the best thing on the tape.” “Write this one.” And that turned into “Last Dance with Mary Jane.”

Anderson Cooper: That’s gotta be hard though you come back saying, “You know, I like the thing that happened accidentally in between two of these songs.” That’s a tough sell sometimes. Isn’t it?

Rick Rubin: I’m not trying to sell it. (LAUGHTER). I’m just sharing what I’m feeling. You know? Like, if they don’t want to do it, it’s fine.

Rubin is now sharing what he’s learned in a book, “The Creative Act: A Way of Being” – out this week. It’s his guide to harnessing creativity – something he figured out how to do his sophmore year at New York University in 1982. His parents wanted him to be a lawyer, but Rubin had another idea.

Anderson Cooper: You decide the dorm is gonna be the studio.

Anderson Cooper: Did your roommate have any say in that?

Rick Rubin: He didn’t, but he loved it.

He was going out every night. He wasn’t into booze or drugs, he says, the music is what drew him and hip-hop was just starting to make some noise.

Anderson Cooper: What was it about hip-hop that attracted you, this kid from Long Island at NYU?

Rick Rubin: It wasn’t made by people who went to the music conservatory. It was made by kids who felt something.

But the few hip-hop records Rubin could get his hands on didn’t sound like what he heard in the clubs.

Rick Rubin: In a hip-hop club, the music was made by the DJ, scratching records, or playing break beats, or using drum machines, or some combination. And then, there would be a rapper or a group of rappers. And the records that came out were always a band playing.

Rick Rubin: And that wasn’t what, to me, what hip-hop was.

So Rubin persuaded rapper T La Rock and DJ Jazzy Jay to let him produce a record that captured the way they sounded live.

The stripped-down sound got noticed and Rubin teamed up with music manager Russell Simmons.

Anderson Cooper: You had a meeting in your dorm room?

That dorm became the headquarters for Def Jam Recordings.

Rick Rubin: Eventually. It became an issue because over time as Def Jam grew, the entire mail room was filled with boxes of records to be shipped out.

His senior year, Rubin was working with Run-DMC, the Beastie Boys, and a teenage LL Cool J and after he graduated, Def Jam landed a seven-figure distribution deal with Columbia Records.

Rubin was always looking for new talent. He heard a jingle from a college radio show and tracked down the rapper, Chuck D, who wrote it, and convinced him to sign with Def Jam. That’s how the groundbreaking group Public Enemy got started.

Anderson Cooper: What kind of an impact do you think Rick had on hip-hop?

Rubin left Def Jam in 1988 and set up shop in California, producing Slayer and other heavy metal bands and well-established artists. Johnny Cash credited him with reviving his career.

Rubin looked around for lyrics that would suit the man in black. He picked a Nine Inch Nails song called “Hurt.” Cash made it his own.

Hurt became one of Johnny Cash’s most popular songs and over the course of a decade they made seven albums together.

Anderson Cooper: He shows up in all these different genres, and helps the real sound of those genres emerge.

Chuck D: Yeah, yeah, yeah, Rick Rubin has always been a little Bruce Lee zen-ish, I can’t teach you, but I can help you explore yourself, that type of thing.

Chuck D, like the rest of us, is still trying to figure out exactly how Rick Rubin does what he does.

Chuck D: Yo Anderson, Rick was on the couch and I was wondering, we’re in the booth, I’m wondering, “Is he asleep or awake (LAUGH) or what?” And then makes a couple suggestions. Boom, boom, boom, boom. And sure enough, it unfolds itself. I’m like, “Ah. Dudes he just did some Rick Rubin s*** to us.”

We watched him do that with pop singer Kesha, she was recording with a gospel choir. This was her first time being guided by the guru.

Kesha: Working with him has been genuinely life changing. He gave me, like, homework assignments.

Kesha: I was writing a song and I couldn’t articulate what I needed to say. And he was like, “Go home and write a full essay about everything you need to say until you can’t write anymore.” And then the song kinda started forming itself.

Anderson Cooper: So he’s not saying this- let’s make a gold record that’s gonna do this in sales and–

Anderson Cooper: How can that be?

Rick Rubin: Well, the audience doesn’t know what they want. The audience only knows what’s come before.

Anderson Cooper: Isn’t the whole music business built around trying to figure out what somebody likes?

Rick Rubin: Maybe for someone else it is. But it’s not for me.

Making music is of course a business, but whether he’s working with Malian singer Oumou Sangare, Kesha or Johnny Cash, Rick Rubin insists for him it’s always been a deeply emotional pursuit.

Anderson Cooper: But, I mean, that does sound very spiritual.

Rick Rubin: It is. No, it is. The whole thing is spiritual. (LAUGH) It is magic.

Anderson Cooper: And you don’t want somebody who, who’s listening to music to think, “Oh. That’s a Rick Rubin record?”

Rick Rubin: No. No. I want them to say, “This is the best thing I’ve ever heard,” and not know why.

Anderson Cooper, anchor of CNN’s “Anderson Cooper 360,” has contributed to 60 Minutes since 2006. His exceptional reporting on big news events has earned Cooper a reputation as one of television’s pre-eminent newsmen.

Denial of responsibility! My droll is an automatic aggregator of the all world’s media. In each content, the hyperlink to the primary source is specified. All trademarks belong to their rightful owners, all materials to their authors. If you are the owner of the content and do not want us to publish your materials, please contact us by email – [email protected]. The content will be deleted within 24 hours.
Music
0
Share

Fans and analysts slam Kirk Cousins for horrendous 4th down pass on final drive vs. Giants