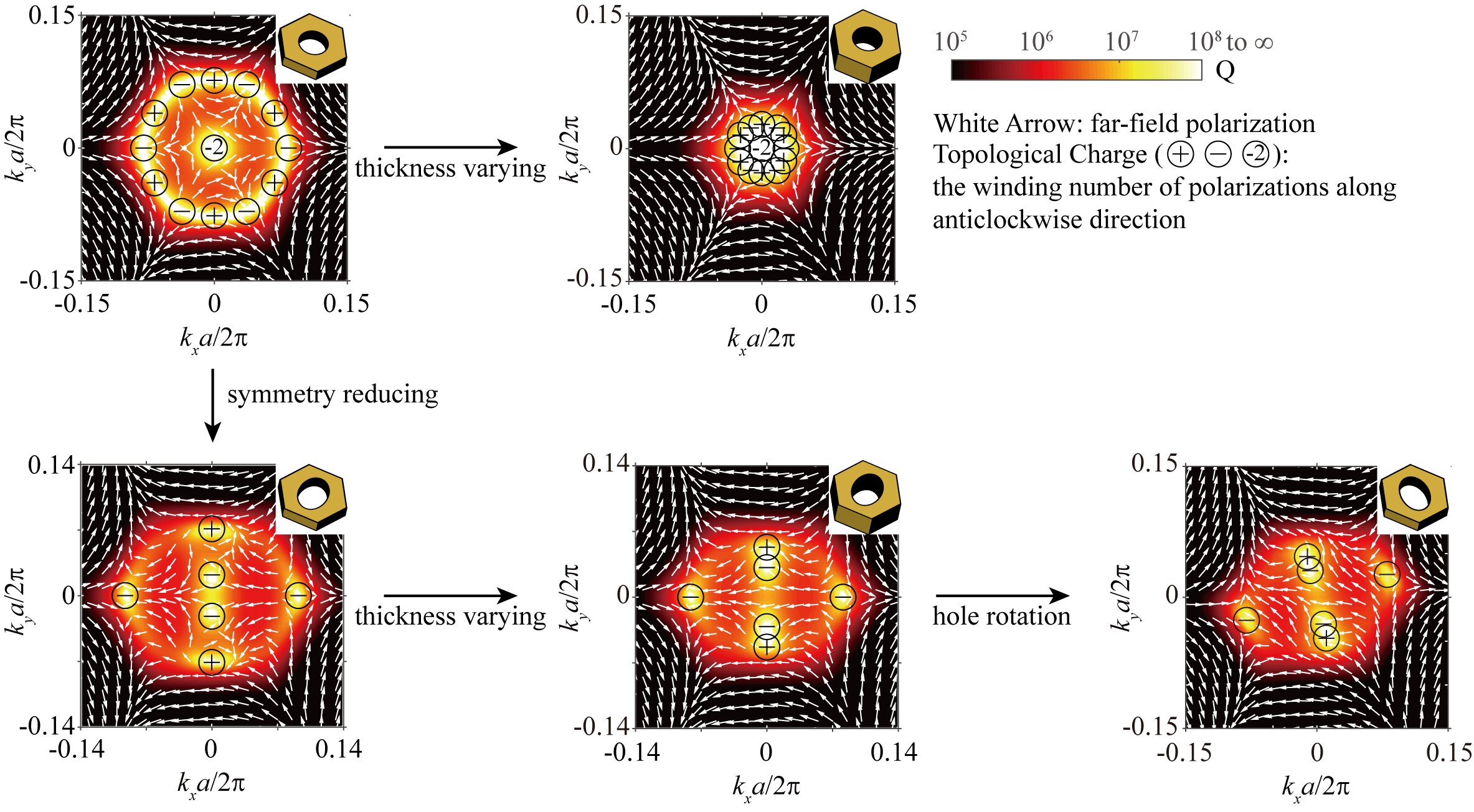 Bound states in the continuum (BICs) have attracted broad research interest owing to their excellent performance in light confinement, which can boost light-matter interaction. BICs can eliminate the radiation loss to theoretically achieve an infinity quality factor Q. However, in practical on-chip resonators, there are inevitable fabrication imperfections that couple BICs to nearby radiative states by scattering, thus limiting the available Q.

To suppress the scattering loss, the improvement of light confinement in the nearby radiative states is required. Multiple BICs can be tuned to the same position to form a merging BIC using the topological properties of BIC. This physical mechanism can significantly enhance the Q of nearby states over a broad wavevector range and improve the robustness of BICs against the scattering loss of fabrication imperfections.

In the photonic crystal slab with a triangular lattice, there is a symmetry-protected BIC with a topological charge of -2 at the Γ point. When the thickness of the slab is appropriate, accidental BICs with topological charges of ±1 appear at off-Γ points, which are formed by the accidental cancelation of radiation loss because of destructive interference. By varying the thickness, multiple accidental BICs can be simultaneously tuned to the G point, forming a merging BIC with a higher-order charged BIC. The Q factors of the nearby radiative states have been significantly enhanced for nearby radiative states compared with isolated BICs or merging BICs with only fundamental charges. In short summary, merging BICs involving higher-order charges can further improve the light confinement and suppress the scattering loss caused by fabrication imperfections.

By replacing cylindrical holes with elliptical cylindrical holes, the symmetry of the structure is reduced and higher-order charged BICs are no longer allowed at the Γ point. Because of topological charge conservation, BICs with the higher-order topological charge split into off-Γ BICs. The split BICs can be tuned in momentum space by varying the structural parameters. They can be simultaneously tuned to the Γ point to form a merging BIC, or to the same position with accidental BICs and form a merging BIC at off-Γ points.

By rotating elliptical cylindrical holes, the mirror symmetry is further broken and BICs are turned away from the mirror plane. By choosing a suitable rotation angle and slab thickness, the merging BIC are steerable with a designed momentum, which is of great significance for improving the performance of direction-related applications.

Citation:
Improving the robustness of bound states in the continuum with higher topological charges (2022, August 29)
retrieved 29 August 2022
from https://phys.org/news/2022-08-robustness-bound-states-continuum-higher.html