Image of Pat Stapleton affixed to front of Sarnia Arena 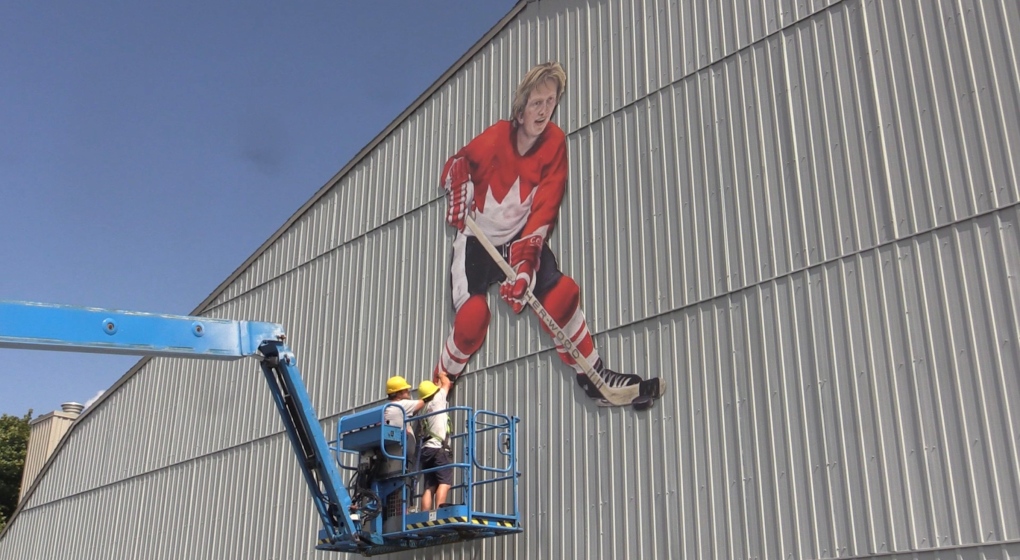 Sarnia, Ont.’s original hockey hero has now been immortalized on the front of the arena where he got his start.

A three by four-and-a-half meter tall stand-off sign of a commissioned art piece of Pat Stapleton — created by local artist Mike Slotwinski — was mounted to the rink on Brock Street Tuesday afternoon.

“It took a long time but here we are, it’s going to happen,” says Brian Keelan, the lead on the project to name the Sarnia Arena after Pat Stapleton.

It’s the one of the finishing touches to the naming project three years in the making. It will also include a graphic wall with photos of Stapleton inside the arena. It will be complete in September, the same month of the 50th anniversary of the 1972 Summit Series.

“He was the first guy from Sarnia to ever play a full season in the National Hockey League,” says Keelan.

Keelan adds, “He was the first to ever become captain of an NHL team, and the first guy from here to ever make an all-star team. The second reason was he was on Team Canada 1972. The only guy from around here that was on that team and he and his defensive partner Bill White had the best plus/minus of any players on the team.”

Workers put the finishing touches on a massive three by four-and-a-half meter tall sign of Pat Stapleton, which is mounted to the arena bearing his name in Sarnia, Ont. (Brent Lale/CTV News London)

There was a divide on council in May 2021 about what the arena should be named. It was passed, and now that it’s approaching completion, Sarnia Coun. Mike Stark believes they’ve make the right choice.

“I think at the end of the day everybody will be thrilled with the way this has turned out,” says Stark. “I’m certainly thrilled with what we see here in terms of the depiction of Pat, and how we can commemorate the fact that he was such an important figure in our history.”

Keelan wanted to name the rink after Stapleton to let young players like his grandson know and carry on his legacy.

“I think it’s important that kids my age need to know that someone actually came from here and made it all the way,” says 19-year-old hockey player Mitchell Keelan.

“I don’t think that was very prevalent when I was growing up knowing that there was so many people that have actually come through organizations like this and through this building,” he adds. “They played a bunch of great hockey games in here and made it all the way to the NHL.”

There are plans for a grand celebration on Sept. 10.

The festivities will include a number of former NHL players from Lambton County, and will recognize the late Stapleton’s contributions to the ‘72 Summit Series.

“Pat’s son Mike — who played 14 years in the National Hockey League — will be here with his mom and they are going to do the ribbon cutting and then there’s this reception inside,” says Keelan. “Then the Sarnia Legionnaires are having an alumni game and Mike will play in that alumni game against the legionnaires in honour of his dad so it’s going to be a good day.”

Is Kandi Burruss Leaving ‘RHOA?’ Some Think Phaedra Parks Might Replace Her

Can you file health insurance claims from two different companies?