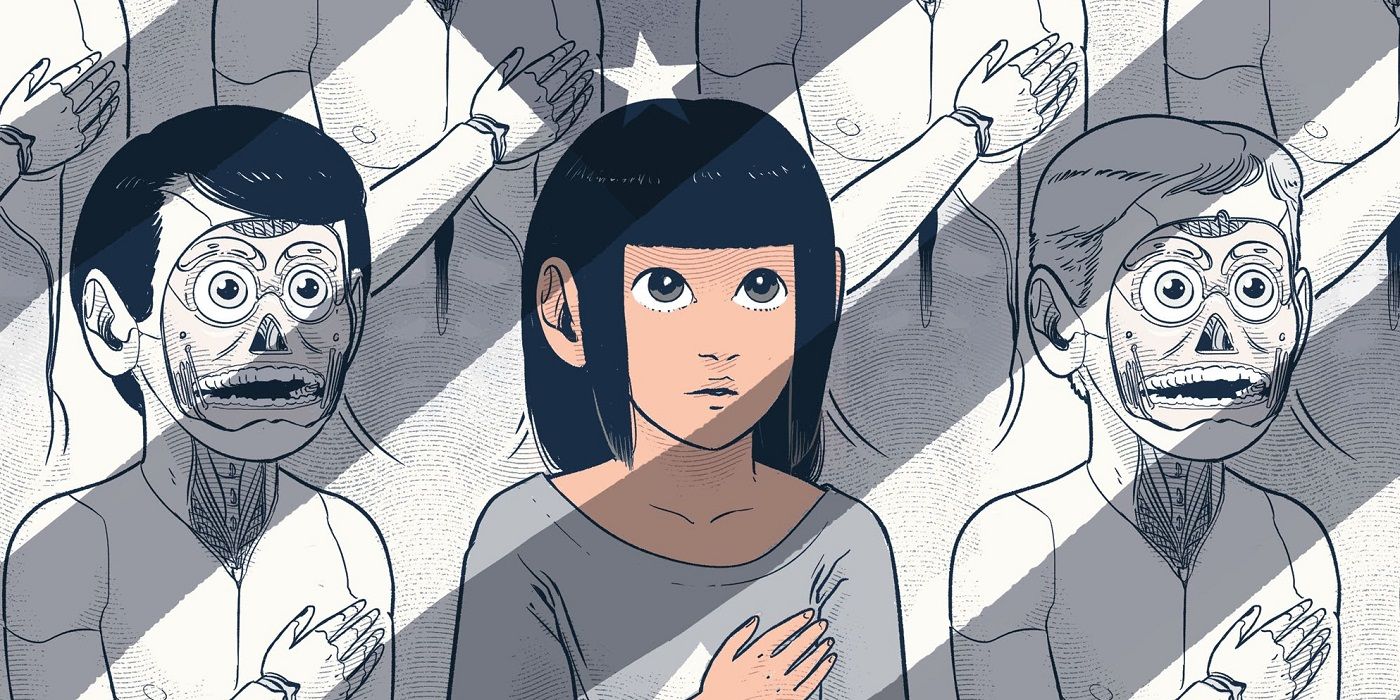 Jeremy Holt and George Schall’s six-issue comic book miniseries Made in Korea recently received a gorgeous trade paper collection published by Image Comics. To its credit, the grounded science fiction story leans more heavily on themes of identity and family than its fantastical premise and setting. Since its publication, Made in Korea found considerable critical acclaim and is one of the more unique sci-fi comics released in recent memory. Holt and Schall’s sleek new paperback collection is sure to thrill devoted and new readers alike.

Made in Korea follows a couple living in Texas who adopt a nine-year-old named Jesse. However, Jesse is an advanced android produced in South Korea. Jesse’s artificial intelligence leads her to develop a personality beyond her parents’ expectations. While she acclimates to life in public school, a South Korean developer learns that Jesse has exceeded her original programming and seeks to recover her. However, with Jesse possessing a mind of her own and on a quest to discover her identity, the impressionable android is vulnerable to harmful influences that could steer her on a dangerous path in the Lone Star State.

Holt’s script keeps readers on their toes throughout the entire story. Although the comic series starts as a slice-of-life story following a family coming together, Holt takes readers on a wild ride that ventures into rich sci-fi possibilities — even flirting with the superhero genre at times — while never failing to keep sight of the story’s genuine emotional stakes. Made in Korea keeps readers guessing where things will go next, defying conventional genre boundaries while crafting a tale about self-discovery and a found family.

Schall’s artwork matches Holt’s tonal shifts seamlessly. Schall transitions from the domestic tranquility of its opening sequences in Texas to the more neon-lit sci-fi sensibilities of its South Korean robotics labs and testing centers with ease. What elevates these narrative shifts is Schall’s color palettes, which give a cinematic feel. Made in Korea‘s pages move like a cinematographer subtly swapping out color filters on film to set the mood. When the story leans into raw emotion and visceral sequences, Schall makes these instances feel like a punctuative staccato, allowing readers to catch their breath before the story ramps back up.

RELATED: The Most Powerful Saga In Comics Is Returning – Here’s Why You Should Care

Also included in this trade paperback collection are short stories from Ron Chan, Eunjoo Han, Wook-Jin Clark, Dave Cole, Manuel and Alfonso Martín, and Jose A. Lopez and Fred Chao. Each short story expands the world of Made in Korea, tangentially highlighting different facets of this near-future world. Adam Wollet letters most of the collection, save for a short story lettered by DC Hopkins, alternating between a more conventional typeface and a digital font whenever the story veers decidedly into sci-fi.

Made in Korea comes from a personal place for Holt and Schall, and that connection to the narrative pops off the page as Jesse finds herself and her place in the world. Made in Korea is refreshingly original. The comic doesn’t rely on formula or well-worn genre tropes but instead keeps readers genuinely invested in Jesse and the supporting cast through a tale that subverts expectations and forges a bold path. Jesse and the creators wouldn’t have it any other way.

How I Met Your Father Ignores HIMYM’s Biggest Lesson

Sam Stone is a 10th level pop culture guru living just outside of Washington, DC who knows an unreasonable amount about The Beatles. You can follow him on Twitter @samstoneshow and ask him about Nintendo, pop punk, and Star Trek.

See The First Look At Harrison Ford In Indiana Jones 5