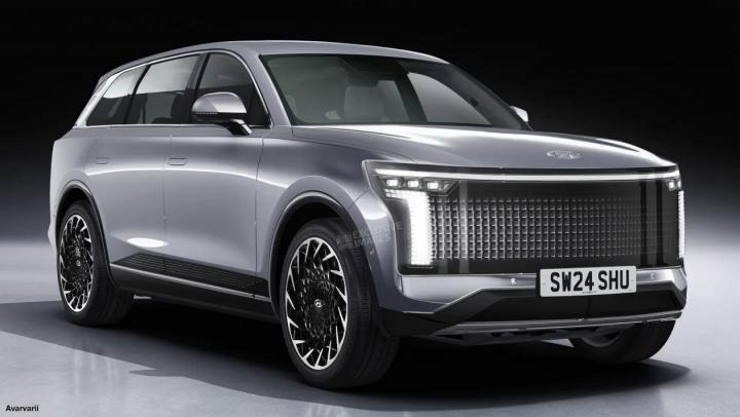 To further enhance its already thriving electric car portfolio the South Korean automaker Hyundai recently announced the launch date for its newest electric vehicle – the Ionic 6. But in the midst of the hype-up for its new forthcoming EV, a report has emerged that Hyundai is also working on a full-size electric SUV named the Ioniq 7 which could be making its debut in 2024. Once launched it will reportedly be competing with the likes of the seven-seater SUVs like the Tesla Model X and Mercedes Benz EQB.

Reports have suggested that this new EV SUV from Hyundai will arrive in 2024, however it is being speculated the Hyundai will pull the covers off of this SUV in late 2022 or early 2023. The Ioniq 7 will be underpinned by Hyundai-Kia’s E-GMP scalable platform for electric vehicles, with the width and wheelbase length of the modular architecture remaining largely unrestricted. Hyundai which currently uses this platform for its crossover Ioniq 5 will be further stretched out to accommodate seven people and a larger battery pack.

According to sources the forthcoming Ioniq 7 will be equipped with 350kW of rapid-charge capacity owing to the 800V electrical design of the E-GMP platform, enabling the addition of up to 100km of range in only five minutes. Additionally, given the 7’s status as a flagship, it could also potentially have wireless charging. This is a potential scenario for E-GMP, As Hyundai’s head of Electrification Development Group, Chung Jin-Hwan stated “It’s in development; we have been resolving many issues that inherently arise with wireless charging.”

For the electric drivetrain side of things, as the model will be based on the Hyundai modular electric platform, it will most likely retain a similar dual-motor setup from the Ioniq 5. Presently the setup on the Ioniq 5 produces up to 225kW and 605Nm of torque and has 4WD capabilities. Also as it will be an SUV Hyundai could pack some extra in the SUV. It could also be giving the vehicle a towing capacity of up to 1600kg.

As for the interior and features of the Ioniq 7, it is expected to come packed with a ton of technological advancements. Hyundai should be adding a new Nvidia Connected Drive software platform with over-the-air update capability fitted to its new cars from 2022 along with more advanced autonomous driver-assistance systems as well thanks to its recent deal with the tech firm. Meanwhile, the exterior design of the SUV is believed to be bold lines and strong surfaces, Ioniq sub-brands trademark LED light treatment and some other similar design cues from its Ioniq siblings.

In other Hyundai news, recently the South Korean carmaker stated that as the small entry-level cars are suffering from low demand, it plans to change its emphasis to “SUV type vehicles and sedans.” Hyundai said that the changes in its corporate strategy are attributed to the changing market dynamics, customer tastes, and the high expense of environmental and safety laws.

NFL star J.J. Watt offers to cover the cost of funeral after woman tweets about selling shoes to raise money