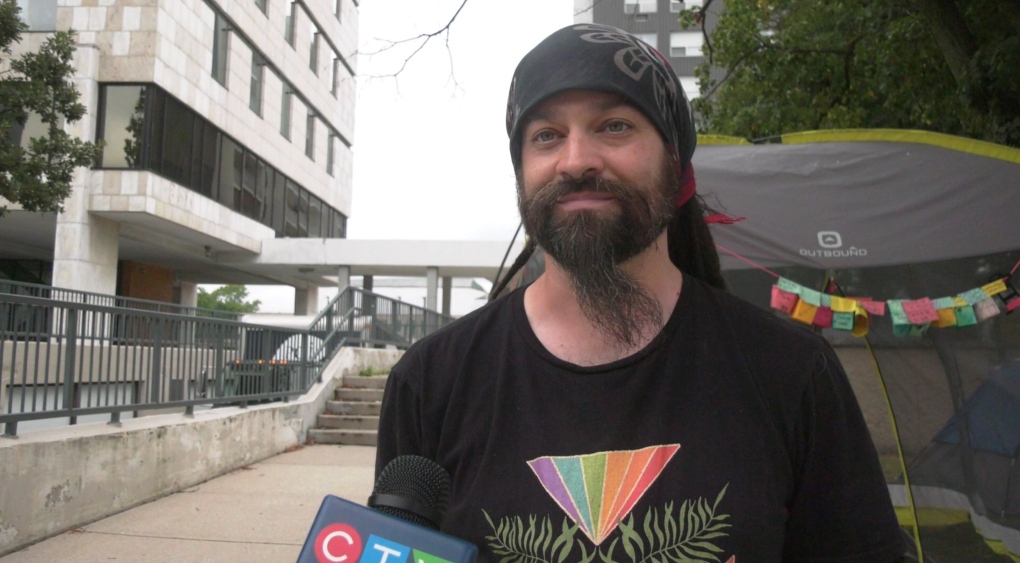 The encampment outside London City Hall is growing in support of The Forgotten 519’s hunger strike.

With each day that passes, London’s most vulnerable are hoping for change.

Dan Oudshoorn is an outreach worker who is on a hunger strike in support of The Forgotten 519 coalition, telling CTV News London on Thursday, “I feel physically tired but mentally strong.”

Since Tuesday morning, Oudshoorn began his hunger strike outside camped outside city hall.

“I’m feeling hope for the first time in the long time, and getting a lot of support with people coming by in the last 24 hours,” he says.

The Forgotten 519 met with the City of London on Thursday in an effort to find new solutions to help those experiencing homelessness.

The coalition is comprised of physicians, frontline workers, outreach workers and advocates who seek to help London’s homeless.

Dan Oudshoorn is an outreach worker who is on a hunger strike in support of The Forgotten 519 coalition. (Jenn Basa/ CTV News London)

The organization says the city had one week to address a list of demands addressing the epidemic of homeless people who “die preventable deaths” on London’s streets, or else a member of the organization would begin a public hunger strike.

“I’m lucky to have made it out alive but not everybody gets that opportunity,” says Michelle Boissonneault, a supporter of those on strike.

On Thursday afternoon, The Forgotten 519, city officials and local agencies met virtually to discuss ideas for immediate action on how to help those experiencing homelessness. Local media however was not invited to join Thursday’s meeting.

“The outcome that I’m hoping for is that the three demands that we put forward are put into action,” says Oudshoorn.

A number of agencies have shown support for The Forgotten 519, including Indwell, Anova, the Ontario NDP and the London InterCommunity Health Centre.

Get rid of inferiority complex for true swaraj : Amit Shah