Huge Ice Planets Throughout the Galaxy May Be Raining Diamonds 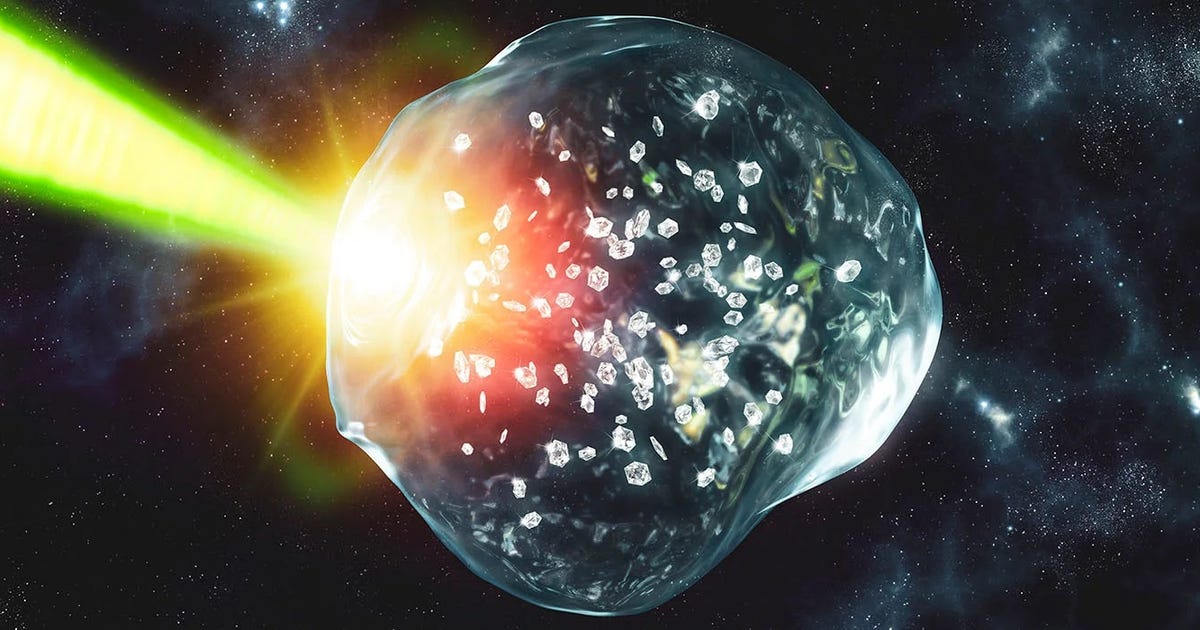 Experiments indicate an abundance of diamonds literally raining down on icy giant planets like Neptune and Uranus and may even point toward a new way to produce tiny nanodiamonds for use on our own planet.

Earlier research has suggested actual diamonds may be present in rain and hail in the atmospheres of giant planets, including Saturn, but a new international collaboration finds diamond rain could be relatively common throughout the galaxy.

Researchers from Germany, France and the US tweaked the previous experiments, using a new material that’s more similar to the chemistry found on ice giants. This mystery material turns out to not be exotic at all, but a kind of PET plastic typically used in bottles you can buy at the store. The more representative chemical mix in the plastic basically added levels of oxygen that hadn’t been present in the earlier experiments.

Using the plastic as a stand-in for the chemistry of an ice giant’s atmosphere, they then zapped it with a laser to simulate the atmospheric pressures present on such planets to see what would happen.

“The effect of the oxygen was to accelerate the splitting of the carbon and hydrogen and thus encourage the formation of nanodiamonds,” Dominik Kraus, a physicist and professor at Germany’s University of Rostock, said in a statement. “It meant the carbon atoms could combine more easily and form diamonds.”

10 spots in our solar system worth visiting in person (pictures)

In other words, the actual environment at icy gas giant planets has more oxygen and more oxygen means more diamonds.

The team, which included researchers from France’s École Polytechnique in collaboration with the SLAC National Accelerator Lab in Silicon Valley, published its study in the journal Science Advances on Friday.

Remarkably, the scientists say that diamonds produced by conditions on Neptune or Uranus could weigh millions of carats. The record for a diamond on Earth is just over 3,100 carats. It could even be that there is a thick diamond layer somewhere above the planets’ cores.

It’ll be quite awhile before it could be possible to go mega diamond prospecting on other planets, but the research may provide insights into new ways to produce nanodiamonds. Such miniscule gems are already used in certain polishes, but could have uses in sensors and renewable energy tech.

“The way nanodiamonds are currently made is by taking a bunch of carbon or diamond and blowing it up with explosives,” said SLAC scientist and collaborator Benjamin Ofori-Okai. “Laser production could offer a cleaner and more easily controlled method to produce nanodiamonds.”

The researchers are planning more experiments that will tweak the chemistry involved yet again to get an even more precise picture of how diamond rain forms and the processes that can create the gems out of thin (or thick) air.