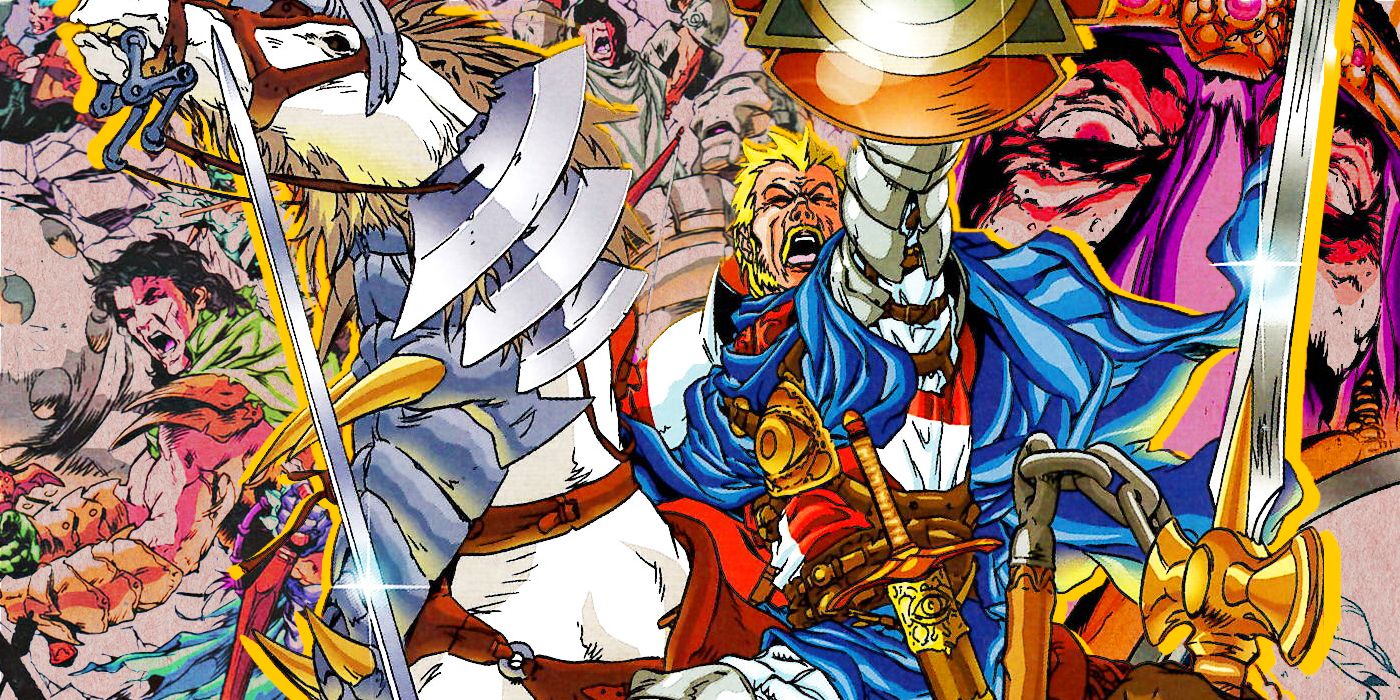 Marvel’s Arthurian fantasy makeover didn’t last very long, but it was one of the most surprisingly successful transformations of the 2000s.

The Multiverse has given fans countless glimpses into the lives that could have been for their favorite characters. The biggest shakeups, however, have always happened within the world of the comics that readers know best. From numerous Secret Wars to Heroes Reborn, the primary Marvel Universe has been broken and reshaped over and over again. As memorable as all of these events have been, there was one that has somehow been relegated to utter obscurity, in spite of bringing Earth’s Mightiest Heroes into their very own Arthurian epic.

2000’s Avataars: Covenant of the Shield by Len Kaminski and Oscar Jimenez introduced readers to the most fantastical version of the Marvel Universe yet. Under the watchful eye of Abstract Entities such as Eternity and the Living Tribunal, the impossibly powerful Shaper of Worlds was permitted to remake reality entirely. With the aid of his four muses, the Shaper of Worlds fashioned a landscape that borrowed combined the wonder of Avalon with the fervent passion of Marvel fans from the real world. This culminated in the rebirth of the world Eurth, and of its mightiest heroes and most menacing villains as awe-striking new versions of themselves.

RELATED: Who Were Moon Knight and Mockingbird’s ‘Killer Avengers’ – and Why Did They Break up?

What followed was something stripped straight out of any Arthurian fantasy, albeit with a uniquely Marvel sheen. Steven Rogers became St’vaan, better known as Captain Avalon. Together with the Champions of the Realm comprised of a myriad of medieval reinterpretations of Earth’s Mightiest Heroes, St’vaan waged war against a similarly transformed Masters, or in this case Minions of Evil. The story itself was nothing short of epic, bringing to life colorful, inspired versions of superheroes and villains from throughout Marvel’s history, including several Golden Age stars such as Jack Frost and the original Human Torch.

Between the stunning landscape and thrilling battles, it is the specific space in which Avataars existed that makes it so intriguing. The have been plenty of similarly wild variants of the Marvel Universe that have typically existed as alternate timelines or realities unto themselves. Avataars, however, was quite pointedly a new form given to the primary Marvel Universe. This isn’t anything particularly new, as both the Marvel Universe and wider Multiverse have gone through multiple rebirths over the years, but Avataars stands out for how it was seemingly forgotten as soon as it ended. Reality warping events have long had greater overarching consequences after the fact, yet Avataars somehow never left any lasting impact on those involved. Marvel certainly hasn’t let go of that same fantasy edge, with Otherworld having become ever more prominent over the past couple of years thanks to events such as X of Swords or the upcoming Knights of X, but it doesn’t look like Eurth has any chance of making its own return.

RELATED: Marvel Confirms the Greatest Avenger of All Time – And It’s Not Who You’d Expect

Avataars: Covenant of the Shield isn’t just an obscure reimagining of the Marvel Universe. It’s one that melded the shared tropes of its own characters and classic stories with ease. Superimposing the Marvel Universe of the late ’90s onto a traditional fantasy setting worked shockingly well. Even though the cast was unquestionably crowded, superheroes from every era felt right at home alongside one another.

Equally impressively, it created a satisfying tale on its own merits. No part of the limited series made readers feel they were witnessing a vague retelling of other tales. If anything, it brought new concepts to the realm of medieval myths and legends without putting any unnecessary cracks in its fantasy facade.

KEEP READING: A D-List Marvel Hero’s Fate May Spoil The Ending Of Marvel’s Next Civil War

John Dodge has been an avid consumer of comic books and nerd culture for as long as he can remember. An expert on competitive gaming and obscure kids shows from the 80’s and 90’s, John has far too many opinions about Beetleborgs for someone in their thirties. You can find him occasionally discussing them over on Twitter at @JohnJDodge.

PlayStation’s Days of Play 2022 Sale to Begin Next…