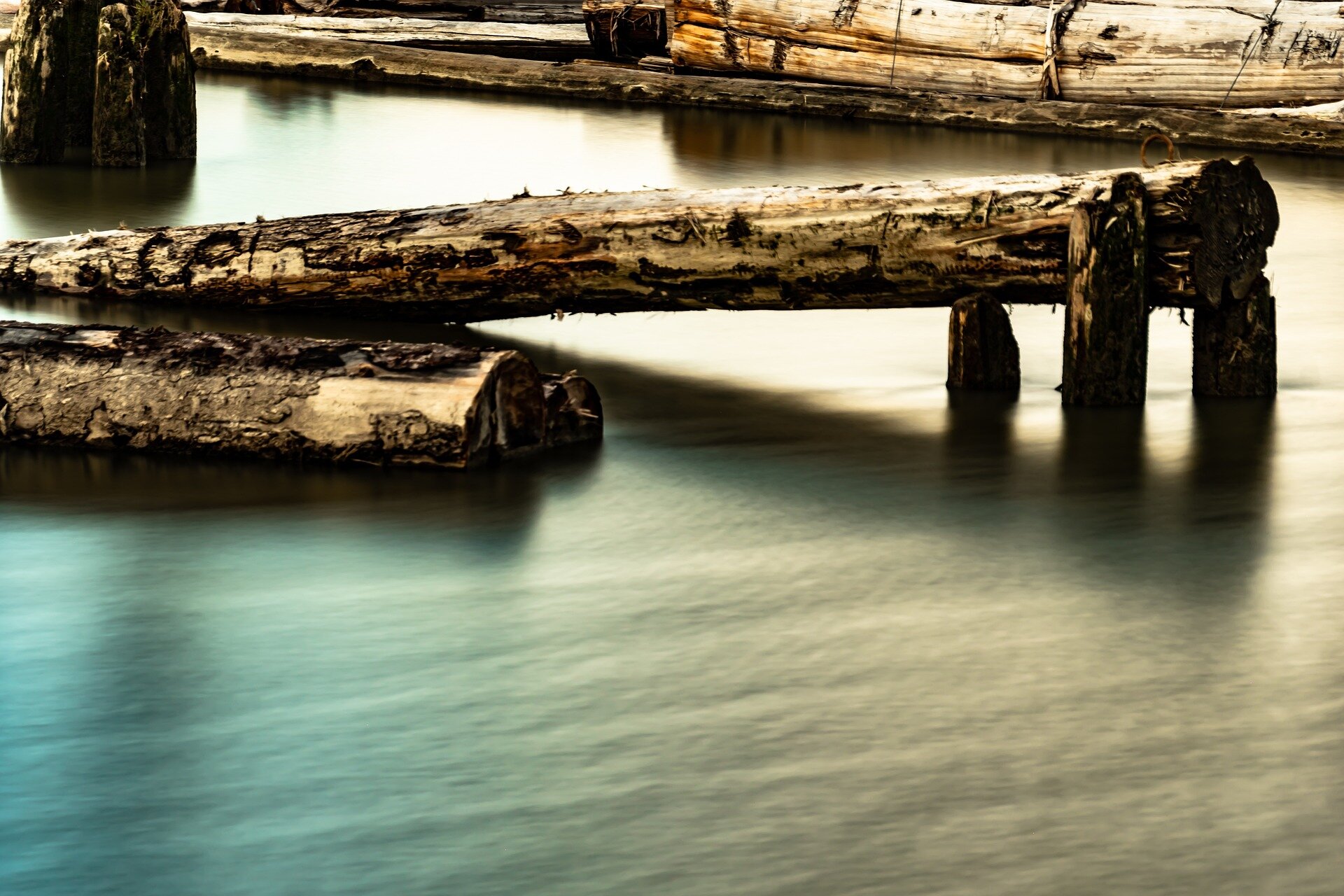 Squinting out the windowed wheelhouse of the ship he’s helmed for two decades, Captain Skip Green spots something several hundred yards in the distance.

“See that little black line?” he says, binoculars at hand.

A half-mile or so out, it’s little more than a speck on the horizon off Whidbey Island. But it’s also the reason Green, his four-man crew and their 104-foot, 174-gross ton vessel are searching the waters of Puget Sound.

It doesn’t look like much and it’s not glamorous, but it is a hazard—it could sink a weekend fishing boat, batter a pier or ding the half-million-dollar propeller on a cargo ship carrying 14,000 shipping containers.

Green and his team from the U.S. Army Corps of Engineers are on the water four days a week, tasked with keeping Puget Sound—and its shipping lanes, ferry routes, naval bases, ports and beaches—navigable and clear of debris.

They patrol the waters from Blaine to Olympia in the M/V Puget, a World War II-era service derrick equipped with a 70-foot crane to haul logs, pilings, booms and all manner of flotsam and detritus out of the water.

The logs enter the Sound on flooded rivers and king tides, washed off banks and shorelines by ever-rising and receding eddies and currents.

Once gathered by the Puget crew, most will eventually return to riverbanks and shorelines. It’s a tidy little dance of intergovernmental holism.

The logs will help restore tiny portions of our environmentally degraded waterways to their former splendor, nurturing plant life and providing valuable habitat and protection for migrating salmon.

In Seattle’s South Park neighborhood, the just-completed Duwamish River People’s Park is the final resting place for 900 of the largest logs Green and crew have collected over nearly a decade. At a bend in the Duwamish, across the waterway from Boeing Field, the Port of Seattle has turned a Superfund site of gravel and concrete into 14 acres of restored marshland and nearly a mile of green, living riverbank.

It is the largest habitat restoration site ever constructed in Elliott Bay, and it is anchored by, and built upon, the floating, natural garbage Green and crew have pulled out of Puget Sound.

It was a couple of decades ago when George Blomberg, an environmental program manager with the Port of Seattle, saw the M/V Puget out doing its work in the Sound.

At the time, the Corps of Engineers would turn anything usable into lumber or wood fuel pellets, but much of the wood ended up hauled off to a landfill in Oregon.

“I saw the snag boat,” Blomberg recalled, “And I thought if the Port could receive the material, it would be a valuable resource and they would avoid the disposal costs.”

The logs are architectural features in the new downtown convention center and they’re planned to be used in the new waterfront aquarium. Some end up as landscaping features at playgrounds or parks. Several dozen Puget-gathered logs were cobbled together to form an arcing wave, in a sculptural installation, SALVAGE, displayed in a South Lake Union gallery last fall.

But most wind up in Port projects, used to rebuild natural shorelines that were lost to industrialization.

The Puget unloads its haul onto barges at the Ballard Locks. The Port then trucks the logs to a vacant lot near the West Seattle Bridge.

Surrounded by a fleet of parked semitrucks, with cranes looming in the background, Blomberg, who has worked for the Port of Seattle for nearly 40 years, inspects recent arrivals. He looks at the logs more with marvel than discernment. Beggars can’t be choosers. Don’t look a gift log in the mouth.

He picks up a small, tubular, twisted white shell, the remnants of a marine bivalve that had burrowed into a log, making it home.

“They call them boring clams,” Blomberg says, pausing a beat. “They’re not boring to me.”

(He is less fond of rabbits and geese, which eat the young vegetation planted at the Port’s restoration projects. “They’re both scoundrels,” he says.)

Blomberg will use these logs to re-create a process as old as time, but one that’s been disrupted by a century of change and industrialization.

In 1900, the area south of the mouth of the Duwamish River was mud and tidal flats, estuarine marsh, forested wetland, and meandering river.

Today, 99% of that environment is gone, replaced with 80% of Seattle’s industrial land, billions of dollars of industry, a massive man-made island, and tons and tons of gravel, steel asphalt and concrete.

Before industrialization, when trees would fall in the Cascade foothills, they’d drift downriver, lodging on floodplains and banks, disrupting river flow, causing new channels to form.

“They would lodge there and form complex environments around them,” Blomberg said. “Walk into any native marsh, you’ll find logs in it.”

They’d provide nutrients for native plants, habitats and protection for salmon smolt navigating their way toward the saltwater.

The distinction is obvious at the new park in South Park. Look across the Duwamish, at the opposing riverbank, next to Boeing Field and the abandoned Jorgensen Forge steel foundry.

The bank is an armored wall of concrete, steel and riprap: impermeable. It offers nowhere for migrating fish to hide, nothing for them to eat as they linger, acclimating to the brackish water.

But at the new park, the riverbank has been brought back to the future.

Crews removed 55,000 tons of old fill material, which had constituted the bank and shore. In its place, they put a grid of 900 salvaged logs, each anchored to the river bottom. The logs are covered in mulch, on which crews planted more than 30,000 native plants, shrubs and trees: Nootka rose, snowberry, cottonwoods, Lyngbye’s sedge, beach grass.

Over time the logs will degrade, but in the meantime they’ll form, with the plants, a riparian berm. A root mass will form.

The park is the fifth site the Port has restored, using salvaged logs. There are plans for similar projects at Terminal 25, across from the southeast corner of Harbor Island and at Centennial Park, just north of the downtown waterfront.

“We anchor the logs, we use them as a green shoreline stabilization technique,” Blomberg said. “And this is a working marsh again.”

‘Trash lumberjacks of the sea’

Aboard the Puget, Green has motored across Possession Sound for nearly two hours before he spots that first speck of a log in the distance, just off Whidbey Island’s Sandy Point.

But that first log has led to a treasure trove of floating debris. Logs tend to accumulate in clusters, brought together by tides and currents, confluence and convergence.

“It’s a little bit of an art form, knowing which way the wind’s blowing, what the tides are doing,” said Brad Schultz, chief of the waterway maintenance unit for the Seattle Army Corps of Engineers, and a ship captain himself.

At the first log, the crew springs into action.

Two crane operators alternate in the cab, guiding the decades-old, cable-operated contraption. It takes practice, three levers and two pedals—both hands and both feet—to maneuver the 2 1/2-ton steel claw, the grapple, toward the logs.

Luis Hernandez starts in the cab, while Jordan St. John, on the deck, gives hand signals and uses a pike pole—a long pole with a dagger point—to guide the log in.

Hernandez gently sets the log atop the tidy pile on deck. St. John blows him a kiss.

Chain saws are sometimes necessary for the longest logs.

“The trash lumberjacks of the sea,” Schultz says.

That first spotted log leads to a meandering road of debris that the ship follows, along the coast of Whidbey, north toward Camano Island State Park, then back down along the southern tip of Camano.

“They just kind of stack up right on that tide line,” Schultz says.

River mouths are hot spots, particularly the Snohomish and the Puyallup.

“How about that triple-birder over there,” Green radios from the wheelhouse, gesturing at a floating log with three cormorants perched on it.

It is both futile and satisfying.

There will always be more logs. And yet.

“You’re doing a public service, you can see what you did at the end of the day,” said Green, who left a career as a Navy and commercial diver to work on the Puget.

“At the end of the day, it’s just trash,” says St. John, also a licensed captain.

‘Squad’ backtracks on no DLC promise with paid emotes