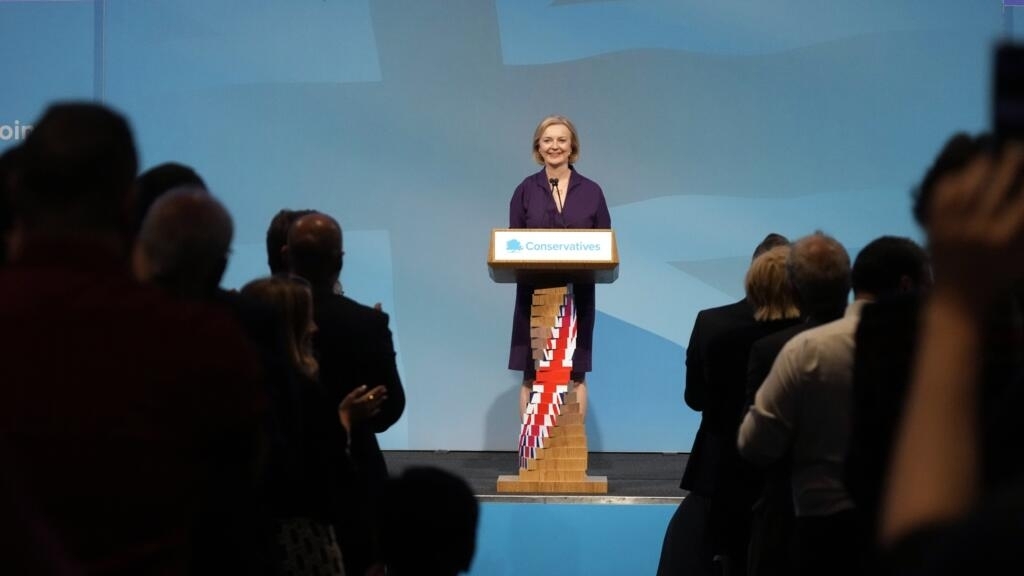 She is only the third woman in history to become British prime minister, following in the footsteps of her Conservative predecessors Margaret Thatcher and Theresa May. Who is 47-year-old Liz Truss and how did she manage to overtake her rival Rishi Sunak in the race to succeed Boris Johnson? FRANCE 24 takes a closer look at the new occupant of 10 Downing Street.

With 57.4 percent of the vote in the Conservative Party leadership contest, Truss can savour a comfortable victory over ex-chancellor Sunak. The outgoing foreign secretary’s success is all the more satisfying because her challenger was initially the bookmakers’ favourite to be the next prime minister. Truss’s triumph can be explained by some strategic moves on her part that have played to the party faithful, but also by mishaps in the leadership campaign of her rival.

When the scandal-plagued Johnson resigned as prime minister in July, Truss was by no means a shoo-in to replace him. She arguably received a boost when Defence Secretary Ben Wallace, seen as a likely frontrunner, announced he would not be standing. Once the field was whittled down to two candidates by Conservative MPs, Sunak was in the lead. The 42-year-old was seen as a political heavyweight who steered the British economy through the Covid-19 pandemic as finance minister.

But in the end, Sunak proved to be no match for his former colleague. During the leadership campaign, Truss, who was educated at state school, stressed that she does not come from a traditional Conservative background. On the contrary, her left-wing parents took her on anti-Thatcher protest marches in the 1980s. As a student, she joined the centre-left Liberal Democrats, before switching to the Conservatives in 1996, the year she graduated.

Truss successfully underscored her less privileged upbringing. “I was somebody who was not born into the Conservative Party. I went to school in Paisley and Leeds, I went to a comprehensive school. My parents were left-wing activists, and I’ve been on a political journey ever since,” she said during an ITV televised debate in July.

In contrast, Sunak’s proximity to vast wealth proved to be a major pitfall. In early April, it emerged that his wife, Indian national Akshata Murty, had been able to save millions of pounds in tax by claiming “non-domicile status”, a legal loophole that allows people to avoid paying tax in the UK on their foreign earnings. Murty’s father is the billionaire founder of Indian IT services company Infosys, in which she holds a 0.93% stake, making her currently richer than Queen Elizabeth II. Despite there being no suggestion of illegality, the news was a huge blow to the Sunak campaign. With Sunak himself hailing from a privileged background (he was privately educated at the prestigious Winchester College), the idea of his wife avoiding taxes on such enormous wealth was a jarring contrast to the cost-of-living crisis facing ordinary people.

Findings from focus groups organised by the British NGO More In Common leave no doubt about the damage done to the Sunak campaign. Speaking to The Times, its director Luke Tryl said: “The moment the tax stuff comes out, on one of the focus groups one woman said, ‘I thought he was the one, but he’s totally blown it, hasn’t he?’ That moment crystallised it.”

Born in Oxford but educated in both Scotland and England, Truss describes herself as a “child of the Union” (of the UK’s four nations) and is vehemently opposed to Scottish independence. While attending primary school in the Scottish town of Paisley, outside Glasgow, Truss played the role of Thatcher in a mock general election at the age of seven. But she failed to garner a single vote – hardly surprising, since the Conservative icon was deeply unpopular in Scotland. Four decades on, Truss has appeared keen to channel the Iron Lady in her sartorial choices and photo opportunities, although she denies this. With Thatcher’s legacy still resonating positively with the Conservative base, the comparisons likely did her no harm in the leadership contest.

Liz Truss denies ever “inviting comparisons” between herself and Margaret Thatcher, and blames “the media for keeping going on about it.” pic.twitter.com/PtGeDFeHY1


Truss “was obviously trying to appeal to a figure in the Conservative Party history who is still much admired”, said Dr. Catherine Haddon, a senior fellow at the Institute for Government, an independent think tank in London.

Loyalty to the boss

Thatcher is not the only one who casts a long shadow. With the new prime minister chosen by Conservative Party members, who make up just 0.32% of the British electorate, both Truss and Sunak had to do their best to appeal to the party faithful. But an opinion poll published in the Observer in mid-August showed that given the choice between having Johnson remain in charge or electing one of his two challengers, a whopping 63 percent of party members preferred Johnson over Truss (on just 22 percent), while 68 percent backed him over Sunak (on a mere 19 percent).

These findings, which reflect Johnson’s enduring popularity with the Conservative base, go a long way to explaining Truss’s success. During her time in Johnson’s cabinet, first as trade secretary then as foreign secretary, Truss consistently toed the party line. She stood by her boss until the end, even at the height of the damaging “Partygate” scandal. Given Johnson’s continuing sway over the Conservative Party – The Times recently reported that some MPs are experiencing “seller’s remorse” over his departure – her loyalty seems to have paid dividends. In contrast, Sunak is perceived to have betrayed Johnson by helping set off the mass wave of ministerial resignations that led to his downfall.

In late July, Culture Secretary Nadine Dorries, one of Johnson’s staunchest supporters in the outgoing cabinet, retweeted then deleted a photoshopped image portraying Sunak as Brutus and Johnson as Julius Caesar, with Sunak preparing to stab his one-time boss in the back. During a Sky News televised debate in early August, Sunak was left flummoxed when asked “Et tu, Mr Sunak?”, leaving the presenter and an audience member to explain the Shakespearean reference. However principled Sunak’s resignation was, it appears to have cost him crucial votes among party members and confirmed a Conservative Party cliché that “he who wields the knife never wears the crown”.

To make matters worse, Sunak made a series of unfortunate gaffes that drew negative headlines. Whether it concerned his favourite McDonald’s meal, upcoming football fixtures or using the contactless payment function on his bank card, each faux pas made him appear out of touch with ordinary people.

The lure of supply-side economics

Hailing from the right of the Conservative Party, Truss has also been aided by her free market instincts, which tend to appeal to the party faithful. Perhaps in a bid to differentiate herself from Sunak, who irked Conservatives by raising taxes as chancellor, Truss has promised tax cuts “from day one” of her premiership. Sunak has strongly criticised this plan as likely to simply create more inflation, which already stands at a 40-year high of 10.1 percent, but his warnings have so far fallen on deaf ears.

Criticism has also come from the left, with increasing calls for more direct support for the poorest amid a worsening cost-of-living crisis. Amid skyrocketing energy bills, Truss has appeared to soften her opposition to what she calls “handouts” and promised to “provide immediate support” to households, without so far giving details.

As for Sunak, he has indicated that he would refuse to serve in a Truss cabinet, with the two squarely at odds on economic policy. His admission in his resignation letter, “I recognise this may be my last ministerial job”, now appears highly prophetic.

Challenges at home and abroad

Despite Truss’s success in reaching the pinnacle of British politics, the hard work lies ahead, both at home and abroad. She faces a colossal challenge in dealing with the cost-of-living crisis, which could see millions of people unable to afford to heat their homes. Rising inflation has also led to a wave of industrial action on a scale not seen in decades. Dr. Haddon noted the importance for Truss of learning the “lessons of the last few years [under Johnson] in terms of dealing with crises, because we are effectively on the cusp or in the middle of another one”. She added: “Every prime minister struggles. They always join and they want to be different from their predecessor. They always think that they will do better by doing differently.”

Nevertheless, on the war in Ukraine, Truss is expected to continue Johnson’s policy of strong support for Kyiv. “We’re in it for the long haul,” she told FRANCE 24 in an interview in early July. But her recent comments that “the jury’s out” on whether French President Emmanuel Macron is a friend or foe caused consternation, as France is one of the UK’s closest allies. Meanwhile, left-wingers are dismayed by her plans to pursue the outgoing government’s bid to deport asylum seekers to Rwanda.

Beyond political differences, many critics see Truss as an intellectual lightweight who is simply not up to the job; a poor imitation of Thatcher. In a scathing column in The Times in mid-August, former Conservative MP Matthew Parris warned readers to have no illusions. “Stick to your first impressions,” he wrote. “Liz Truss is a planet-sized mass of overconfidence and ambition teetering upon a pinhead of a political brain. It must all come crashing down.”

Time will tell if he was right.