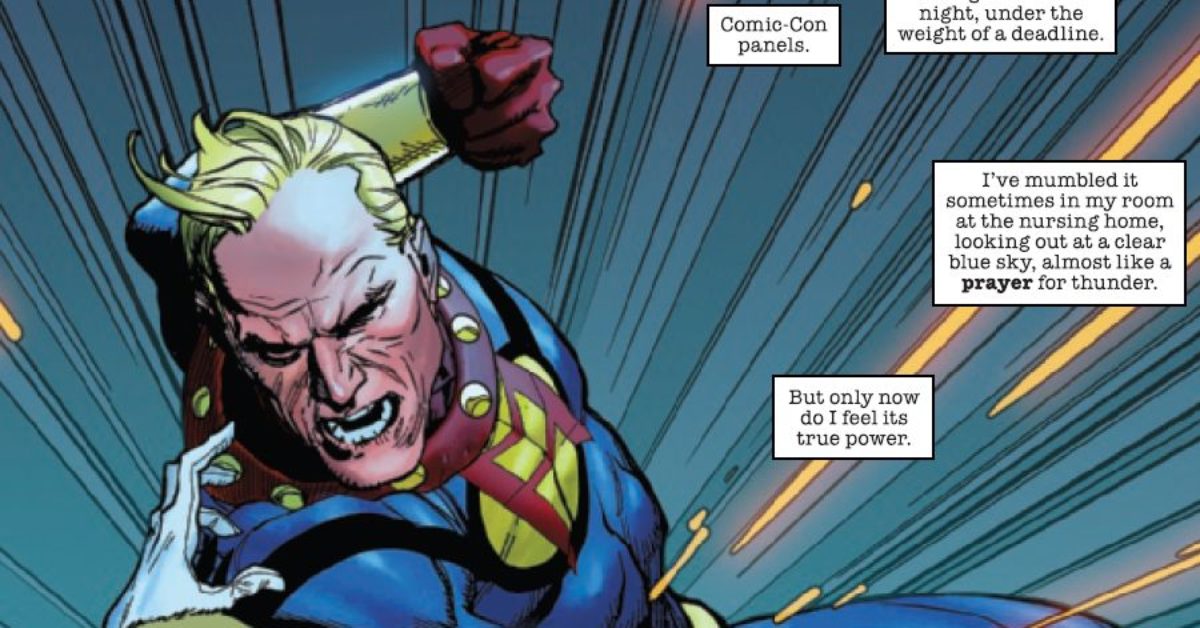 Today’s Miracleman #0 from Marvel Comics is a literal redrawing, rewriting and reworking of the Eclipse Comics spinoff series Miracleman Apocrypha #1. With a series of stories set within the Miracleman universe but not in any way impinging on continuity, as they appear as works of inspired fiction in the Library. But some may have more of an impact than others. One sees a version of Miracleman visiting an old man, a creator of Miracleman in his world.

Is this Mick Anglo? It doesn’t seem like it. Especially given what comes, as this Miracleman sees him as one who constantly exploited his own creation over decades. But it does lay out a multiverse of Miraclemen.

Because this Miracleman is not the only one. There are others crossing the boundaries.

But could this unnamed creator just be this world’s own version of an unreleased Miracleman?

So we have the creator of Miracleman, as Miracleman, looking for other Miraclemen across the multiverse, into stories, escaping stories, real, fictional and meta…

And even recognising that, Animal Man-style, someone is writing him now. Given that this is Jason Aaron writing, and Aaron is coming to the end of his Avengers run, might a new Miracleman series, with the potential to crossover into the Marvel Universe, be on hand? New York Comic-Con would be a great opportunity to publish this as well…

MIRACLEMAN #0
MARVEL COMICS
AUG220743
(W) Neil Gaiman, Various (A) Mark Buckingham, Various (CA) Alan Davis
Forty years ago, Miracleman’s modern era began and changed the world of comics as we know it. Now, on the cusp of a new era of Miracleman, we celebrate all things Kimota with a who’s who of the best talent in the industry! Plus, Neil Gaiman and Mark Buckingham set up this issue and their return to MIRACLEMAN: THE SILVER AGE! Rated T+In Shops: Oct 05, 2022 SRP: $5.99