How Climate Change Science Has Changed Due to COVID-19 Restrictions 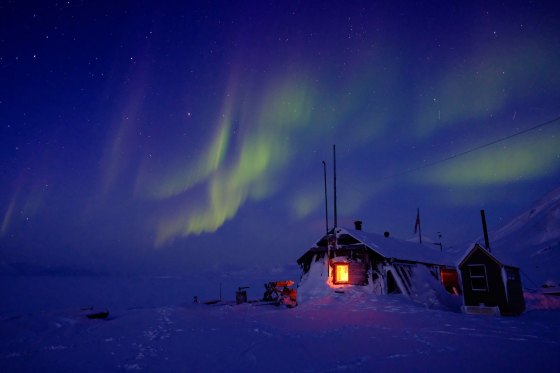 In late 2019, expeditioners and guides Hilde Falun and Sunniva Sorby went to Norway’s remote Svalbard archipelago to complete a long-term goal of being the first female team to over winter in the Arctic. But the pair’s planned return home to mainland Norway coincided with the start of the COVID-19 pandemic and pretty quickly they found themselves stranded. There had been plans for a ship carrying friends and family to come and collect them as the ice began to melt in March, but travel restrictions got in the way, and they couldn’t come home until September.

So instead, they spent the winter and much of spring up until May in an isolated, tiny wooden hut high up in the Arctic circle, surrounded by winter darkness. There was a definite upside, though, at least for the global scientific community: just as the two were stuck in Svalbard, fieldwork by climate scientists and researchers came to a standstill, as those who would normally travel to the Arctic to monitor the levels of melting ice as the region transitions from winter to summer were stuck at home. Faced with prolonged Arctic isolation as the rest of the world dealt with a growing pandemic, Falun and Sorby started collaborating with the scientists unable to travel, collecting data and samples to aid their research. Their work proved so useful that, after they finally did get to go home, they came back to their little hut for a second winter at the end of 2020.
[time-brightcove not-tgx=”true”]

Every day, they ventured out into the freezing temperatures, traveling by foot or snowmobile to collect samples of ice, sea water and organisms, in an effort to help scientists better understand the impacts of climate change in one of the fastest-warming and most-fragile parts of the planet. “They have provided data from a place where no one else has been observing,” says Kim Holmén, international director of the Norwegian Polar Institute. “They have been watching for megafauna, seals, polar bears, whales, sightings of opportunity. These are not quantitative data but they certainly are qualitative data and population density can be estimated from these types of observations.”

Falun and Sorby are not technically scientists. But they have seen the changes in the Arctic first-hand over more than two decades working in the tourism industry and carrying out expeditions at the planet’s extremities. This was the second winter they spent in Svalbard. During the winter of 2019-2020, they became the first all-woman team to overwinter in the Arctic; they documented what they called their “Hearts in the Ice” expedition through blog posts, photography, and video chats to raise awareness of climate change.

The Arctic is ground zero for rising temperatures and scientists predict that within the next five years it will warm at more than twice the overall global rate. On the Svalbard archipelago where Falun and Sorby were based, temperatures have already risen by 3° to 5°C since the early 1970’s, which is two to three times more than the global average. That, plus the devastating knock-on effects melting ice could have on the planet as a whole—melting Arctic ice can change the circulation of the oceans and alter temperature patterns and cause extreme weather—is why it’s so important for scientists to monitor the region closely.

When COVID-19 restrictions kicked in, governments and scientists globally recalled almost all research ships. Commercial ships and airplanes would ordinarily also contribute to ocean and weather observations and data collection, but with cruise ships not traveling and a massive reduction in commercial flights due to travel restrictions, there were fewer resources all around. “In terms of the observing system as a whole, the major thing is aircraft observations from commercial aircraft, they fell by about 90%,” says Peter Thorne, professor of physical geography at the National University of Ireland, Maynooth, who also chairs the International Surface Temperature Initiative. These observations and data collection are vital for the understanding of how climate change is affecting the planet. “What you do not monitor, you cannot understand, at a fundamental level,” says Thorne.

According to a recent United Nations report, the pandemic has caused “significant impacts” on land-, marine-, and air-based observing systems, leading to gaps in data that could affect the long-term quality of forecasts and climate services, though these, according to the report, are not yet “fully visible or/and understood.” The gaps that developed during the pandemic will “become more and more apparent moving forward,” says Thorne. This is particularly problematic for our understanding of polar regions and oceans, he explains. “It’s really the ocean that worries me, because of the lead time required [for monitoring changes] it may not look obvious over the actual time of COVID-19 but we will come to see the impact on the ocean observing system after everything is back to normal.” In the polar regions, the measurement of glaciers and permafrost is usually carried out once a year as the ice thaws and 2021 will be the second year during which scientists will have been unable to travel to those parts of the globe.

Hypothyroid sufferers left in the dark after…

RUBY WAX: Pandemic forced us to face demons we didn’t…

Indeed, the pandemic hit right in the middle of one of the largest collaborative climate science expeditions ever undertaken: the Multidisciplinary Drifting Observatory for the Study of Arctic Climate (MOSAiC) a year-long endeavor involving hundreds of researchers from 20 countries that had taken over a decade to plan. In order to closely examine the changing environment in the Arctic, a German research vessel called the Polarstern was purposefully frozen into the ice in the Siberian area of the Arctic in October 2019; the plan was for researchers from around the world to alternate time on board the ship over the course of a year. However, five months into its icy berth, the Polestern instead had to break away and sail out of the Arctic to reach two resupply ships in ice-free waters to allow for restocking and to change over to a new group of scientists and exchange its crew who had been on board for a number of months. While the expedition ultimately went ahead, there was an “almost four-week gap in the year-long time series that we were collecting,” says Madison Smith, a researcher at the applied physics lab at the University of Washington, who was part of the expedition.

These sorts of data gaps aren’t the only impact the pandemic has had on climate science. Climate negotiations and conferences where scientists present their work have been cancelled and there have been little-to-no means to collaborate in person. One of the largest examples of global scientific collaboration are the reports produced by the Intergovernmental Panel on Climate Change (IPCC), the U.N. body that assesses the science related to climate change. Thousands of scientists and researchers from 195 countries collaborate on the reports, which are produced every four years, and help inform governments on climate change action, like setting emissions targets. “[The pandemic] made so many aspects of all the work that we do so much harder,” says Thorne, who contributes to the report. The IPCC had expected to publish the first part of its final report in April 2021, but that’s been pushed off to August—luckily, still in time for COP26, the global U.N. climate change negotiations that will be held in November.

During their most recent Arctic stay—October 2020 to May 2021—one of Falun and Sorby’s most difficult tasks was ice-core sampling, which involves using a special drill to remove samples from the ice, a few inches wide and almost 2.5 feet in length.

Arctic ice sheets trap air bubbles as they are formed so these sorts of core samples give an overview of past atmospheric conditions, along with a kind of biography of microscopic organisms that lived in the area over that time. “We ride our snowmobiles out on the ice and take two ice-core samples,” says Sorby. “The drill bit is probably as tall as we are and very heavy.” The samples can help scientists determine how fast the ice is melting. “They have been sampling the thickness of the ice and the quality of the ice,” says Holmén. Researchers can use satellite imagery to estimate Arctic changes, but the sorts of samples collected by Falun and Sorby give a clearer picture of what is happening on the ground.

During their last stay, the duo undertook all sorts of other jobs out on the ice, and the icy Arctic waters. They collected phytoplankton in the sea for the Scripps Institution of Oceanography in California. They took samples of saltwater and seaweed for the University Center in Svalbard. Using an infrared drone, they measured surface sea-ice temperature for the British Columbia Institute of Technology and monitored wildlife for Holmén and his team at the Norwegian Polar Institute. They also collected physical evidence of the impact of humans on the environment. Despite their remote location they constantly found and collected “plastic and a lot of marine debris. Nets and all kinds of trash, you would not believe what washes up on shore,” says Sorby.

(Their work has also made them stand out in another way. One relatively unseen effect of COVID-19 is what it’s done to the careers of female scientists, many of whom have been forced to take up an oversized burden of childcare. “I’m concerned about the careers of female scientists without childcare. At a time when publication track record is really important. Some of them have been really hard hit,” says Valérie Masson-Delmotte, Co-Chair, of the IPCC Working Group I.)

Falun and Sorby hope they can share lessons from their experience—which they see as an extreme form of the isolation so many people around the world have dealt with in the last year and a half. They learned to live more in the moment and appreciate small things, particularly food, which can be in short supply. “We celebrate every dinner,” said Sorby, speaking to TIME in February. “Even if we have a limp carrot left, we celebrate that limp carrot.” They left the Arctic with a message of encouragement to the world not to feel despondent about climate change but to take action. Having seen the rapid changes in the Arctic firsthand, Sorby says they want to empower people to bring about change by turning “climate despair” into “climate engagement and inspiration.”

Denial of responsibility! My droll is an automatic aggregator of the all world’s media. In each content, the hyperlink to the primary source is specified. All trademarks belong to their rightful owners, all materials to their authors. If you are the owner of the content and do not want us to publish your materials, please contact us by email – admin@mydroll.com. The content will be deleted within 24 hours.
climate changeCovid-19
0
Share

This PS5 India Restock Twitter Bot Gets You Game Discounts Too

I’m a Pandemic Dad Who’s Been Covering COVID-19. I Don’t Know How to Think About the…