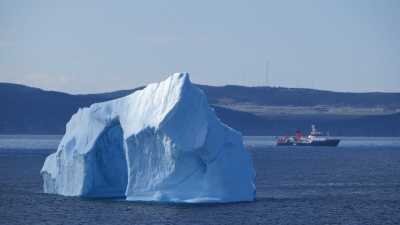 Extreme cooling events during the last glacial period, known as Heinrich events in the North Atlantic, are a good example of how local processes change the global climate. While the impacts of Heinrich events on the global glacial environment are well-documented in the scientific literature, their causes are still unclear. In a new study, researchers from Bremen, Kiel, Köln and São Paulo (Brazil) have now shown that an accumulation of heat in the deeper Labrador Sea caused instabilities in the Laurentide Ice Sheet, which covered much of North America at the time. The Heinrich events were triggered as a result. The researchers demonstrated this by reconstructing past temperatures and salinities in the North Atlantic. Their results have now been published in Nature Communications.

The presence of Heinrich layers has been established throughout the North Atlantic, from off Iceland, southward to a line running from New York to North Africa. Such coarse rock debris could only have been transported such a great distance from its point of origin in the Hudson Bay by icebergs.

“The actual significance of these Heinrich events, however, lies in the fact that, along with the melting phase and release of icebergs, large quantities of fresh water were introduced into the North Atlantic,” says Lars Max, paleoceanographer at MARUM—Center for Marine Environmental Sciences at the University of Bremen and first author of the study. As part of their work, he and his co-authors reconfigure the interrelationships among Heinrich layers, freshwater supply, and changes in the ocean circulation. A thin freshwater lens lying atop millions of cubic kilometers of water during the Heinrich events is presently considered to be the cause of the disruption of the Atlantic Meridional Overturning Circulation (AMOC), or its complete shutdown, with profound regional and global climatic consequences. The AMOC is just one segment of the global conveyor belt of ocean currents that is driven by temperature and salinity and plays a significant role in the climate system.

“Originally the disruption was considered to be the result of internal instabilities of the ice sheet itself. Our study, however, provides evidence that changes in the ocean had a destabilizing impact on the ice sheet on the North American continent,” says Lars Max. The study of a sediment core obtained by the research vessel Maria S. Merian at the outlet to the Labrador Sea in the North Atlantic provides the first solid evidence of recurrent, massive accumulations of ocean heat in the deeper layers of the subpolar North Atlantic. This facilitated the melting of the polar ice sheets from below.

“Using trace-element and isotopic analytical methods, we were, in fact, able to reconstruct temperature and salinity increases at around 150 meters of water depth that always systematically preceded the Heinrich events in time, and that corresponded to times of an already weakened Atlantic Meridional Overturning Circulation,” explains Dirk Nürnberg of the GEOMAR Helmholtz Centre for Ocean Research in Kiel, who is responsible for the laboratory analyses.

This suggests that changes in ocean circulation triggered the ice-sheet instabilities. A continuous warming of the ocean at this depth was critical for destabilizing the ice shelf from below, and eventually led to the accelerated shedding of icebergs—the Heinrich events.

Understanding the processes from Earth’s history also enables us to better predict changes that can be expected to accompany the current global warming. “If the overturning circulation should weaken in the future due to anthropogenic climate change,” suggests Christiano Chiessi of the University of São Paulo, “we would expect an accelerated warming of the deeper subpolar North Atlantic that could negatively impact both the stability of the present-day Arctic glaciers and the freshwater budget of the North Atlantic.”

The latest Intergovernmental Panel on Climate Change (IPCC) Assessment Report (2021) concludes that with continued warming of the climate, there could be a weakening of the overturning circulation in the Atlantic Ocean within this century. Intensified warming of the deeper subpolar North Atlantic and more rapid melting of the Arctic glacial masses could also have the result of further accelerating the global rise in sea level. As Lars Max also points out, however, we can expect that the stability of the Antarctic Ice Sheet will play a significant role in the course of sea-level rise. Further studies are crucially needed in order to better predict to what extent the future deceleration of overturning circulation and possible warming of the deeper ocean could have on the future stability of the Antarctic Ice Sheet.

Provided by
University of Bremen

Behind the results of the 2022 Pacific Cup – XS Sailing

The Absolute Weirdest Junk You Can Buy On Amazon – Review Geek