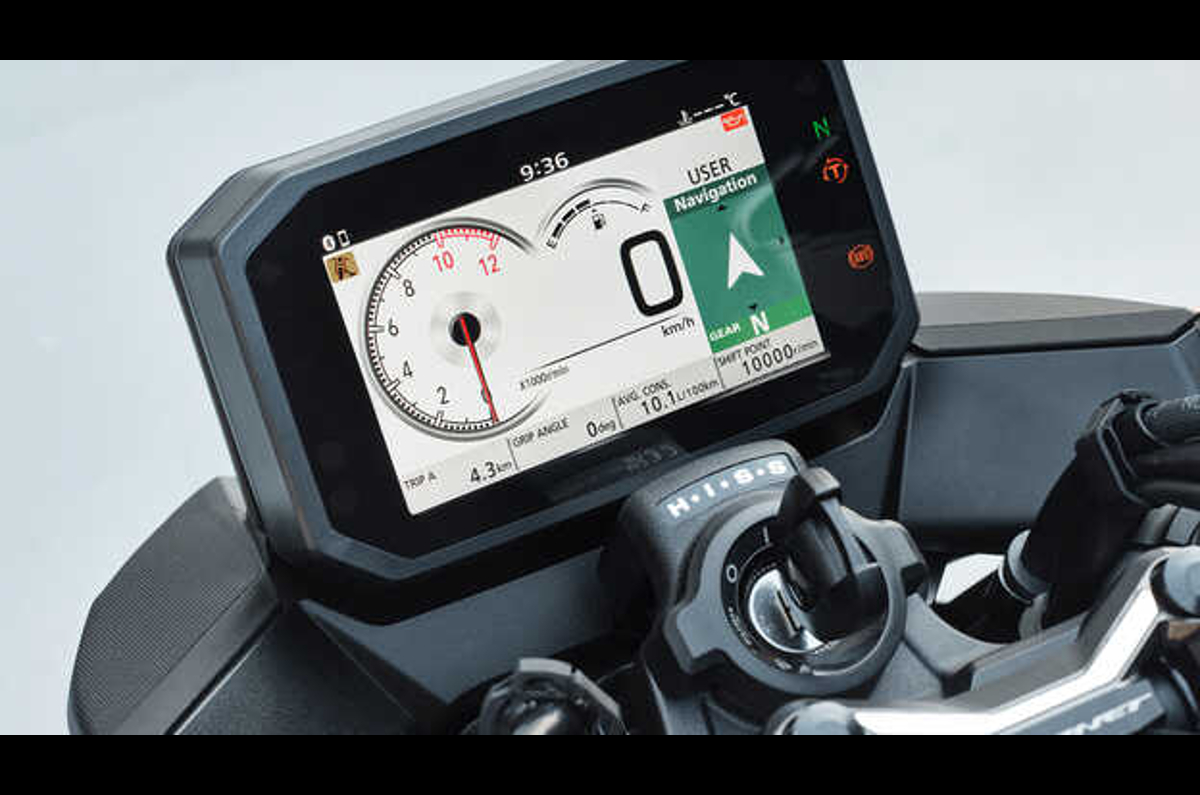 The CB750 Hornet is powered by a liquid-cooled 755cc parallel-twin engine making 92hp and 74.4Nm.

After months of drip-feeding us with teasers, Honda has finally taken the covers off its latest middleweight contender, the CB750 Hornet. Powering this bike is a new liquid-cooled, 755cc parallel-twin engine making 92hp at 9,500rpm and 74.4Nm at 7,000rpm.

What is also unique in this space is the addition of a comprehensive suite of electronic rider aids such as four rider modes, traction control, wheelie control, engine brake control and an optional bi-directional quickshifter.

The new 755cc parallel-twin engine, like most modern parallel twins on the market today, employs a 270-degree firing order to mimic the sound of a V-Twin engine. Mated to this engine is a 6-speed gearbox, with a slip/assist clutch and you can even equip it with an optional bi-directional quickshifter.

Nestling this new engine is a steel diamond frame suspended by a 41mm Showa SFF-BP (Separate Function Fork-Big Piston) and a pro-link monoshock. With its 15.2-litre fuel tank fully brimmed, the CB750 Hornet weighs 190kg and the bike has a seat height of 795mm. Braking hardware is courtesy of Nissin, with a pair of 4-piston radially mounted calipers biting down on twin 296mm discs and a single-piston caliper clamping down upon a 240mm disc at the rear.

In this space, Honda has usually kept electronic rider assists down to a minimum, with their inline-four 650 models. The CB750 Hornet, however, brings to the table a comprehensive suite of electronic rider aids controlled through its 5-inch full-colour TFT display. Equipped with an electronic ride-by-wire throttle CB750 Hornet boasts of four power modes – Sport, Standard, Rain and User (fully customisable).

Also on offer are three levels of traction control and wheelie control, both are integrated and not separately customisable. Rounding off the electronic assists are adjustable engine braking and engine power modes as well as an optional bi-directional quickshifter. Honda has also equipped the CB750 Hornet with Bluetooth connectivity for the TFT display and it even boasts of Honda Smartphone Voice Control, something we haven’t seen before.

In international markets, the Honda CB750 Hornet is priced at £6,999 (approximately Rs 6.5 lakh) and it manages to undercut its primary target, the Yamaha MT 07 (priced at approximately Rs 6.71 lakh), while offering superior performance and features. That also makes it more affordable than its sibling the CB650R as well as the Triumph Trident 660.

This aggressive pricing strategy marks a sharp departure for Honda who usually commands a premium over the competition. The CB750 Hornet also rivals the Aprilia Tuono 660, although the Italian bike weighs less and makes slightly more peak power. However, the CB750 Hornet claws back some ground when it comes to peak torque (by some margin) and has a lower seat height.

As far as India is concerned, nothing has been revealed about the CB750 Hornet making its way here, but it makes sense for Honda to do so. If priced around Rs 7 lakh-7.5 lakh, the CB750 Hornet (on paper, at least) does make a strong case for itself in the middleweight naked segment, especially considering its international rivals are either priced too high or not sold here.

What is a fair price for the CB750 Hornet considering the equipment it carries? Let us know in the comments section below.