Homeowner seeks help from City of Blanchard for flooding troubles 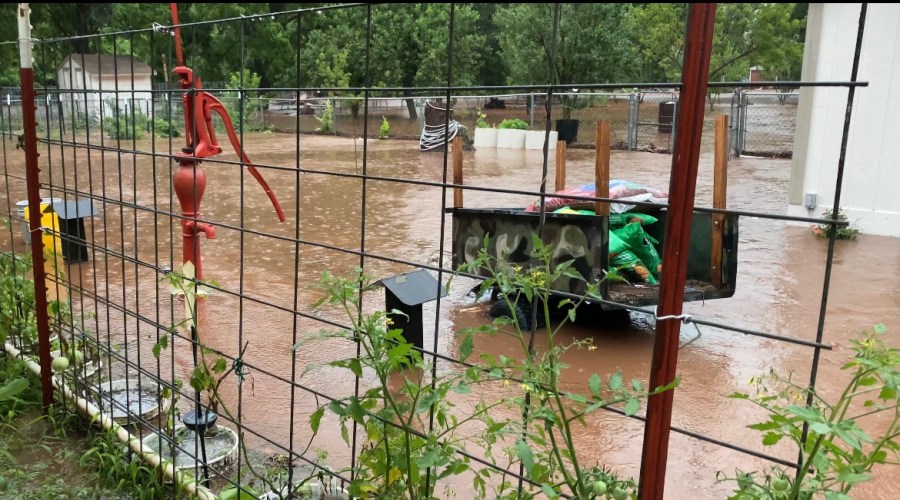 BLANCHARD, Okla. (KFOR) – Homeowner Gary Lytle recorded the most recent flooding on June 8 with his phone, and his yard looked more like a pond for swimming or fishing.

Lytle said the problem originates at the creek on the west side of his property where the tinhorns that flow the water underneath the road are not large enough to accommodate the rain.

“But they are a foot, foot and a half apart. And it just starts collecting debris in the middle,” said Lytle.

Once debris clogs up, it sends inches of water into his yard. Flooding all of the blackberries, tomatoes and peach trees around the house.

Lytle said he’s experienced this many times since he bought the home in 1990. But every time he contacts the city, they don’t take his complaints seriously.

“I showed him video of it and their young, as I call it, pimply faced engineer, got up and he said that was a hundred year flood,” said Lytle.

Oklahoma’s first, ripe blackberries? We found them ready to pick in Sapulpa

In June, several inches hit Blanchard. It did not take one hundred years before the flooding occurred again.

Lytle has a measuring stick in the yard and the day of the flooding it read to be over four inches. It was not only trouble for his garden, it was also potentially dangerous.

The Lytle’s have a storm shelter in the event of a tornado or high winds. When the creek over-flowed, the storm shelter was not visible from the house. It was submerged.

“No way to get inside. It’s still got water down there. Got down there and got everything out. Yet I got to take a wet vac, I pumped it for a day and a half,” said Gary Lytle.

When KFOR’s photographer opened the hatch to get video, there was still standing water at the base of the last step.

The City of Blanchard was not available for a comment. News 4 is waiting back on a response from the Public Works Department.

Gary Lytle is not optimistic when asked whether he can get the city to make some changes.

Review: What LACMA’s Spanish American art says about our world