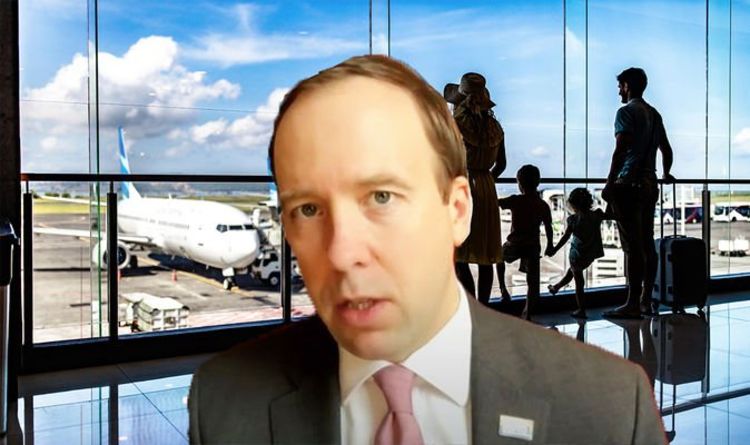 Matt Hancock appeared on BBC Breakfast this morning to debate Boris Johnson’s ‘roadmap’ announcement final night time. According to the newest travel recommendation from the Government: “Self-contained accommodation, such as holiday lets, where indoor facilities are not shared with other households, can also reopen” in Step Two, “no earlier than April 12.” “The rest of the accommodation sector,” can reopen in Step Three, “no earlier than 17 May.”

The roadmap has left many individuals optimistic they’ll go on a international holiday in May – however is that this the case?

When requested about May travel on BBC this morning, Hancock stated: “We’ve been absolutely clear that this is an area that we need to do further work on.

“We’ve put within the dates that we want to see this opened up, however they’re ‘not earlier than’ dates, so, we’re saying it will not occur earlier than then.

“We have also got this review into international travel which is important.”

Hancock defined that it was vital to determine the vaccine’s influence on Covid variants earlier than travel could possibly be reopened fully.

“The number of these new variants that might not be dealt with by the vaccine as effectively as the Covid that’s circulating in the large part here in the UK – all those variants, we need to see the impact of the vaccine on them,” he stated.

“If that impact is perfectly good – if that stops the majority of hospitalizations and deaths, as the vaccine does against the variant that’s here, then great.

“But if there is a variant that may get across the vaccine, then clearly, that may set us again.”

How to clean rust off tools – four cost-effective…

The Health Secretary continued: “We would must be cautious towards that.

“That’s why we’ve set out a review in that area because we just don’t know the science in that space yet.

“We’re engaged on it very onerous, together with with our colleagues within the South African authorities and the crew at [defence laboratory] Porton Down who’re completely good on this and different scientists, however that is without doubt one of the unknown as but.”

As for vaccine certificates, Hancock commented: “There’s clearly an vital position for certification for worldwide travel, and we’re working with colleagues world wide on that.”

Mark Tanzer, Chief Executive of ABTA – The Travel Association said: “The Prime Minister’s announcement today sets an ambition to get people travelling before the summer – which will not only be crucial for travel businesses whose revenues have been wiped out, but also for the millions of people who are desperate to travel again, whether to see friends and relatives based overseas or for a much needed holiday.

“We’re pleased to see the Government has responded to our calls to engage with industry on a specific roadmap for travel, and we welcome that the Global Travel Taskforce will reconvene to work with ABTA and the wider travel industry on a plan for reopening travel.

“Even with the prospect of travel resuming, we renew our call to the Chancellor to use his Budget next week to provide tailored financial support to travel agents and tour operators, recognising the pressing need that travel companies have for financial assistance if they are to come through the weeks ahead.”

How do I stream Star on Disney+: the settings you need to change today